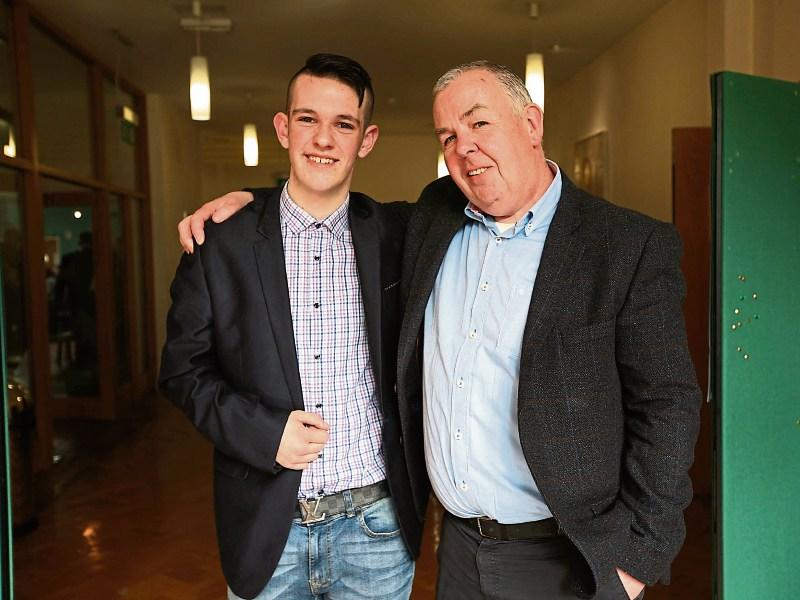 Patrick O’Brien with Mike O’Connell at the conference

A YOUNG Abbeyfeale man took centre stage at a recent national conference in Dublin and told the audience how his experience of social farming had helped change his life.

For Patrick O’Brien, the very experience of speaking before a large audience was in itself a new and challenging one. But, as he told the Limerick Leader, “Through social farming, I learnt to do things I thought I could never do.”

Patrick was one of a number of participants who took part, via Foróige,  in a 10- week Social Farming placement at Mike O’Connell’s farm in Clarina last year. He had no previous experience of farming but loved every minute of the days he spent at the farm, learning new skills in caring for animals and learning to work as a team with Mike and the other participants.

His time there, Patrick told the conference, gave him new confidence and belief in himself. It also gave him the courage to get up and speak out.

He is currently following a Back to Education course and hopes, when that finishes, to get a place on a farming course. His dream, he explained, His dream is to get work on a farm and one day to own his own small farm like Mike’s with lots of different animals, where he will be able to bring young people like himself and “give them a chance like Mike gave me.”

Now back in Abbeyfeale again, the conference, Patrick said, was brilliant. “It was a big opportunity for me.”

The Dublin conference brought together some 150 people who have been involved in promoting and developing the concept of Social Farming in Ireland, including West Limerick Resources. The idea behind social farming is that it offers ordinary farm activity on ordinary working family farms as a form of social support.

It links farm families with users of services such as youth work, intellectual disability or long-term unemployed.

Last year, some 140 participants took part in placements on 31 farms, including Mike O’Connell’s but that number is expected to grow.

“Most of those who engage in social farming have small to medium farm holdings, do not farm intensively and have mixed farming systems,” says Dr Aisling Moroney, who is policy officer with Social Farming Ireland.”

“Many have additional skills, such as woodworking or cooking and we find that there is typically a strong emphasis on the maintenance of traditional farming skills, welfare of animals and the heritage and ecological value of the farm.”

The benefits for the participants, their research had shown, include an improved sense of well-being, heightened confidence. But there are benefits too for the farmers who take part, Dr Moroney stressed, and not just an additional source of income.

“Among farmers there was a strong sense of personal satisfaction from having made a difference in participant’s lives and a sense of enjoyment and fun from having participants and others spend time on the farm,” she said.

Other benefits were a reduction in the sense of isolation and a chance to make better use of old farm buildings or kitchen gardens.