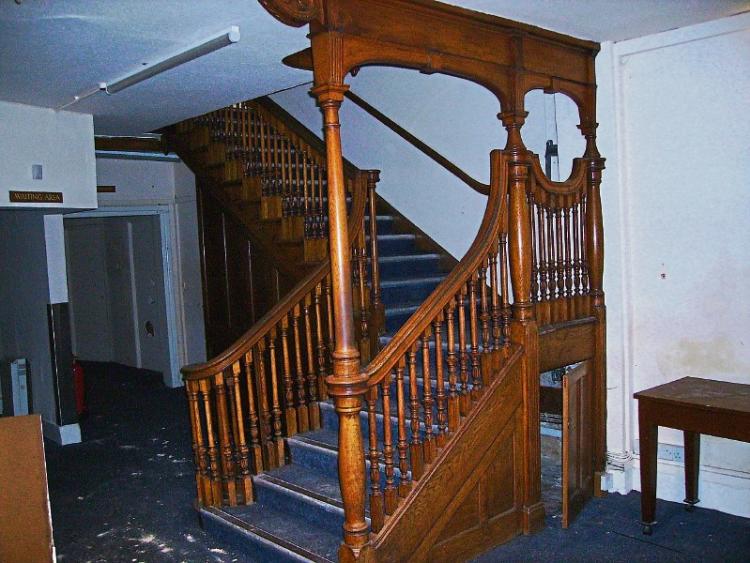 A LOCAL council in England will fund the removal of an historic oak staircase, regarded as a war memorial, from a hospital and transfer it to the custodianship of the Limerick Civic Trust.

Cotswold District Council, in Gloucestershire, will remove the stairwell from the Cotswold Old Memorial Hospital, an historic item previously donated to the hospital by the Limerick-based family of Major Edgar James Bannatyne.

The Old Memorial Hospital is being demolished and the Cotswold District Council wanted to ensure that the staircase was preserved for posterity.

Major Bannatyne was a member of the Royal Flying Corps in World War 1 and died at Rendcomb Airfield in the Cotswolds in 1917.

The line of the family has now died out, but the Bannatyne family are remembered as “leading merchants who helped to bring prosperity to Limerick”, the Civic Trust said.

The Trust will remember the Bannatynes by installing the staircase in St Munchin’s Church in King’s Island, where a number of graves and monuments the family.

David O’Brien, CEO, Limerick Civic Trust, said he was “very grateful” that Cotswold District Council agreed to give them custodianship of the staircase. “We are delighted to be able to provide a very fitting home for the staircase in St Munchin's Church which we are currently converting into a museum, allowing us to ensure this unique war memorial will be open to the public.”

Mr O'Brien explained: “Our vision for the museum is to tell the military history of Limerick from the time of the Siege of Limerick forward.  The siege was the last stand of a great European war and Limerick’s part hasn’t been properly recorded.  The Carrol Collection gives us one vista into this colourful military history. This collection was gifted to the Limerick Civic Trust by June O'Carroll Robertson, a descendant of the Carrol's of Tulla and Lissenhall in Co Tipperary. We believe there are other families in the UK who would consider donating items of historical interest with a connection to Limerick.  Artefacts related to the military history of the region are of particular interest to us.”

Cllr Nick Parsons, the Deputy Leader of CDC, comments: “The Council will be demolishing the Old Memorial Hospital and we wanted to ensure that this magnificent staircase was preserved for posterity.  Placing it in storage would have deprived the public of a magnificent war memorial and we are very pleased that it will now be on display on the grounds of the Bannatyne family crypt in Ireland.   The fact that we are marking the centenary of the end of World War I this year brings extra significance to this agreement.”

“From a financial viewpoint it would have cost a substantial amount of money per year to keep the staircase in storage so the cost of transferring it to Ireland for public display represents very good value for money for taxpayers,” Cllr Parsons concluded.

Plans are in place to turn St Munchin’s Church into a military museum.