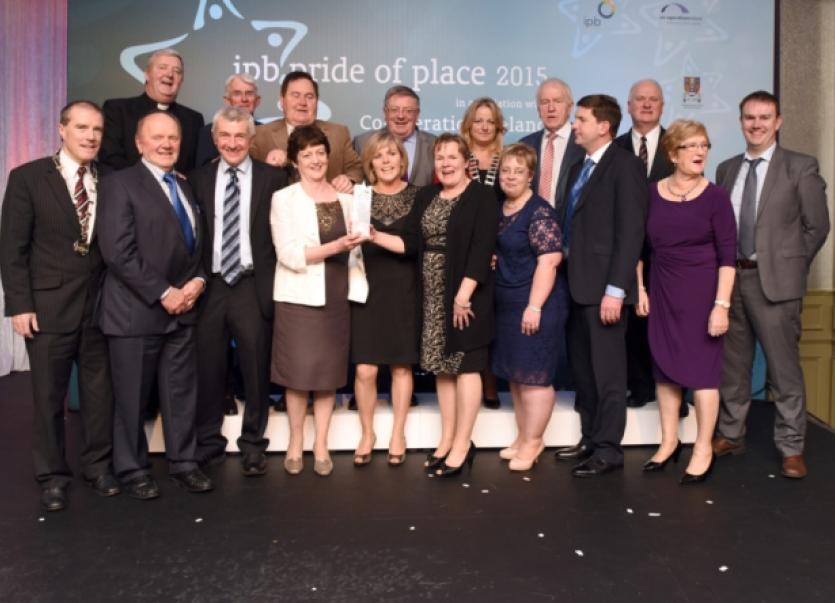 THE FOUR nominees who represented Limerick at the weekend’s Pride of Place awards did the county proud.

THE FOUR nominees who represented Limerick at the weekend’s Pride of Place awards did the county proud.

Kilteely was named overall winner for population centres of up to 300 while Scanlon Park in Castleconnell was named runner-up in the housing estates category. Limerick was also represented by Bruff-based BGM Community Council Ltd and Tait House Community Enterprise in the city.

There were dozens of prizes on the night but the only representative to speak was Limerick’s John McCarthy, who took hold of the mic to thank the Kilteely-Dromkeen community for getting 100% behind their bid.

“It’s like winning the All-Ireland!” said John, who is holding a Christmas ‘hooley’ celebration party in Ahern’s on Saturday night from 9.30pm and all are invited.

“It is a fantastic achievement. It all started when we held a meeting to organise our Team Limerick Clean-Up. I spotted the ad in the Leader looking for nominations and everybody backed it. Over 30 different parish organisations were involved,” said John, who thanked his fellow committee members.

Robert O’Dea, chairman of the community council, said it was a “once in a life-time achievement”. They were led on stage by parish priest Fr Conor Hayes and Robert praised Kilteely NS for making a video showing the importance of the event to the teachers and pupils.

“We weren’t expecting it. Even when our name was called out we couldn’t believe it!” said Mags.

The spirit in the estate was demonstrated at Halloween when locals came together to extinguish a fire in one of Lisnagry FC’s dressing rooms.

Including children has been a big part of their success in improving their estate.

“If you get the kids involved and working on projects they have pride in where they live,” said Mags. It follows Castleconnell’s recent triumph in Going for Gold.

The awards were presented by former taoiseach, John Bruton, among others.

Deputy Mayor Gerald Mitchell said he was delighted that Limerick has once again featured prominently in this annual awards scheme which is testament to the pride of place that the people of Limerick have for the areas they live in.”

“Securing the overall award in their category is an outstanding achievement for Kilteely which has been officially recognised in Tidy Towns, Going for Gold and Limerick in Bloom competitions down through the years for its role in the development and improvement of the locality.

“Working with the people of the parish of Kilteely-Dromkeen, Limerick City and County Council and Ballyhoura Development, the local volunteers have developed a number of projects aimed at enhancing the local community and their hard work has paid off with this prestigious award,” said Cllr Mitchell.

Turning to Scanlon Park, the deputy mayor said it is a good example of how residents working together can help to foster a strong sense of community spirit.

“This is a development that features almost 90 houses with a wide range of residents from young families and children to older residents and single people. There has been an active residents association for the last 10 years which has worked hard to develop the estate, particularly the landscaping. I warmly congratulate them on their success,” said Cllr Mitchell.

Pat Dowling, director of services, said: “The council is delighted to have been able to support each of this year’s local participants, particularly in the weeks leading up to the judging stage of the competition,”

“I want to congratulate Kilteely and the residents of Scanlon Park for delivering real positive change by improving their local environment and undertaking initiatives that have further improved the quality of life for everyone who lives in these communities,” he concluded.