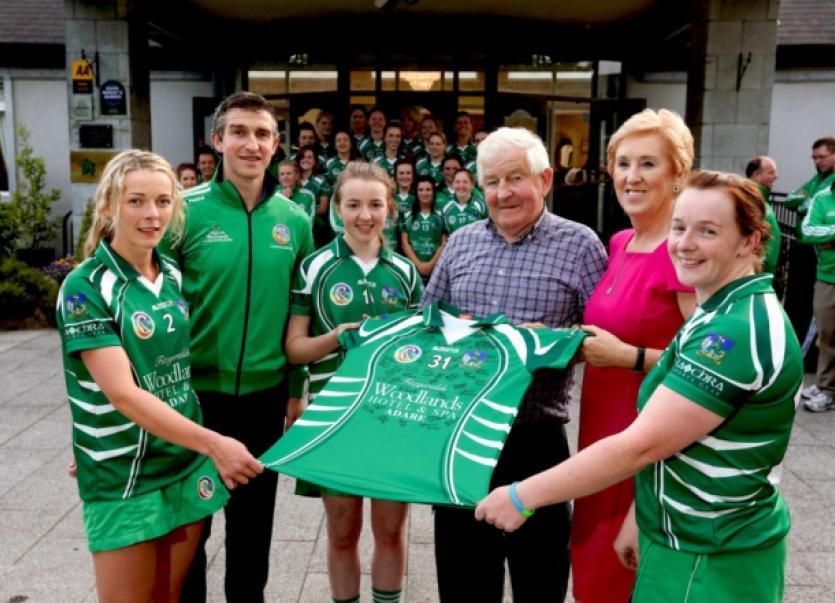 Dick Fitzgerald always had the ability to hold centre court, he loved the company of people, he entertained and cajoled in a warm natural way.

Little did he think thousands would repay that warmth as they queued for over 11 hours to pay their last respects to Dick and shake the hands of those he left behind. The changing colours of winter saw people line the driveway at his home near the Woodlands Hotel. They travelled from all over Ireland and despite taking close to four hours before they would pay their respects it appeared as if time stood still.

Dick Fitzgerald, his wife Mary and family have given much to the G.A.A and it was little surprise that players and officials from almost every county turned up to honour that commitment to the GAA and to the community at large. It was one of the biggest funerals I have ever attended. Dick Fitzgerald was a proud Kerry man and despite living in Limerick for almost 50 years he never forgot his home in Castleisland County Kerry. Dick had the ability to make you feel welcome long before he spoke, his wide smile and firm handshake was ever present.

His funeral was quite amazing. States men would have been proud had they got a send off similar to Dick Fitzgerald, the crowds of people took over the long driveway and into the fields they waited for hours. During this time people told stories of the man and while the occasion was sad it became clear now it was a celebration of his life. The great and good turned up at the Woodlands Hotel. Dick loved the ordinary things in life - football, hurling, horse racing and indeed most sports would be entertained but his love of gaelic games were never too far from his mind. Like all Kerry men he was proud of the green and gold and never lost an opportunity to express such a view.

His son David told us at the funeral mass that it took a while to convince him to attend the Kerry v Mayo replay at the Gaelic Grounds but he was happy to say later it was the greatest game he ever saw. Before that game he had backed Kerry to win the All Ireland some might say because of loyalty but he would say because of quality.

The local GAA club in Adare and the large community left no stone unturned to assist people who attended this funeral but as always the Fitzgerald family and staff thought of most things and while people had to wait they were well looked after. So many players from Kerry, Limerick, Cork, Clare and many more counties attended and I am sure that was a great source of comfort to the family.

Fr Joe Noonan and Fr Chris O’Donnell led the huge number of priests who attended the mass in Adare. The Church was overflowing. Fr O’Donnell told of Dick Fitzgerald’s wit and humour and how much respected he was in Adare and in so many parts of Ireland. He said, “The huge crowd who turned up to pay their respects was a show of public support to Mary and her family on the loss of Dick. In so many ways Dick Fitzgerald was a legend, this was the people’s way of showing their affection to you as a family for what you have done for the community and the many organisations you have helped.”

Over the years I met Dick Fitzgerald at various games. The pipe was always in the mouth. He was very proud of all of his family but when Conor lined out with Adare and Limerick you could see it meant a lot to him. He would never have much to say about it but deep down you knew watching Conor wear the green and white of Limerick held a special place in his heart. He would have witnessed the many great days Conor had with Adare and Limerick but he was also saw the trauma he endured with devastating injuries.

It was very difficult for David Fitzgerald who had to address the huge crowd at the funeral mass but he somehow found the strength to do justice to the memory of his father. It was a speech filled with passion, emotion and sometimes laughter but at the end we all knew a little more about the man who would surely have smiled with the large crowd he had drawn.

David told us his father was the second youngest of a family of seven. They were hard working and always knew the value of it. He said his father gave teachers a hard time and as a result he attended eight schools, said David. “The school of life offered dad many lessons and he made good use of many of them.” Anyone that has ever attended the Woodlands Hotel will know how the family presence there is part and parcel of it. Dick Fitzgerald played a key role in that model, said David, “He always told us to treat everyone the same, look after people the best way that you can and nothing was ever a ‘no’.”

The packed church could feel how difficult it was for David Fitzgerald paying tribute to his father but showing great strength he told the congregation some of the great lines Dick had, like, “How ye lads” and the story when his father met two people at the races in Killarney. Dick met two people, had forgotten their names and wasn’t able to introduce them to each other. He was sharp and he turned to the two lads and said “I’m not going to introduce ye because ye both know each other.” It was a classic and just one of the many lines Dick used to get out of difficult situations. Mary Fitzgerald’s drive and ambition is well known but her husband Dick played a key role in building a family business that has served Limerick and Munster in a very special way.

Adare GAA club provided a guard of honour from the church to the nearby grave yard, it was fitting because Dick Fitzgerald was very proud of what Adare had done on the field and he was proud also that his family had played a part in many ways in supporting the club.

On his coffin rested four jerseys, Kerry, Limerick, Adare and Castleisland, all of these meant so much to him.

He loved bringing people together, this of course is an art in itself and few mastered it better than Dick Fitzgerald. He has left us to join the lord’s kingdom now and I am sure he has wasted little time in finding old friends like Tim Kennelly, John Egan and also the great Paddy “Bawn” Brosnan - all great Kerry footballers.

Dick has left us much too early showing great battling qualities to fight his illness. He leaves a legacy and many qualities passed on to his family and will never be forgotten for all his good endeavours.

To his wife Mary and his family I offer my sincere sympathies. Dick Fitzgerald may have left us but all who knew him were the better for it.