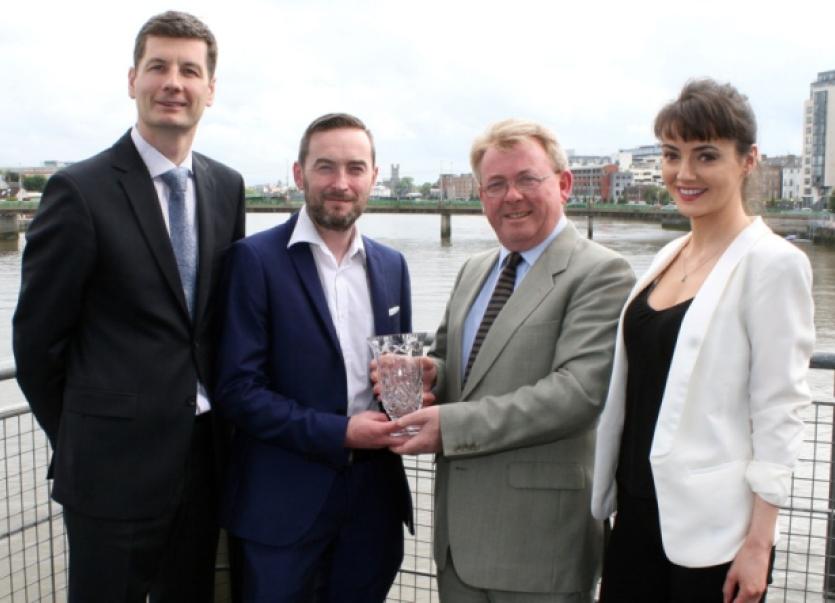 A LIMERICK father who has opened new channels of communication with his autistic daughter thanks to the development of a device which may revolutionise one-to-one contact with people who have non-verbal disabilities, has been named the Limerick Person of the Month.

A LIMERICK father who has opened new channels of communication with his autistic daughter thanks to the development of a device which may revolutionise one-to-one contact with people who have non-verbal disabilities, has been named the Limerick Person of the Month.

Robert Laffan’s touchscreen device, Tippy Talk, has enabled his daughter Sadie, 4, to not alone request various items but also to express how she is feeling – which has, in turn, resulted in reduced frustration levels for the little girl.

Her proud dad said he was “chuffed to bits” to receive the award for his invention - particularly as he was being honoured by his home place.

“The award was a huge surprise. To be honoured by your own home town is something else altogether,” commented Robert when he accepted his award at the Clarion Hotel this week.

The Fairgreen native who now resides on Old Cork Road was in second year of his degree course in Industrial Automation and Robotic Systems in LIT when he decided that he was going to do a project with Sadie in mind.

“We started studying a new module in third year. It is software that allows you to set up designs on screens, of tanks and pumps and motors switching on and off. I saw that there was a text message function inside in that, that an engineer could be alerted by text message if a certain industry process went down,” Robert recalled.

Robert, 38, waited with interest to see what Sadie’s reaction would be “and lo and behold she started sending out messages”.

Sadie, who will be five in September, is completely non-verbal. She has the same vocal abilities of a nine-month old infant.

Robert’s new development has been “huge” for her in terms of communication.

The first real evidence that Sadie was responding to the system occurred within two or three days of her being presented with the device.

“Myself and my wife Emily were chatting about what we were going to get in the chipper for Sadie. Sadie was in the room and she overheard the conversation,” Robert explained. “Emily said to get her chicken nuggets. I got in the car and drove off to the chipper. Just as I arrived at the chip shop I got a text message saying: ‘Hi Daddy, I want onion rings’. Sadie understood the conversation that had gone on and sent the message all by herself.”

While there are apps which work in a similar way to Tippy Talk there is a limitation that the recipient would have to be in the same room as the sender of the message.

“With this system Sadie could send a message from Australia or America - it doesn’t matter,” said Robert who has another daughter Megan, 18.

While it is unclear whether Sadie’s level of communication will improve significantly as she gets older, her frustration levels have dropped since using the new system.

“The best is when she sends messages about feelings like ‘Daddy I feel happy’ and you look over and she is jumping up and down on the couch,” said her proud dad.

Robert, who has just completed his degree - and passed his exams - wants to thank Ian Foley, his supervisor in LIT, Dr Alan Kavanagh in LIT, his wife Emily, all his classmates in LIT and all his family and friends for their support.

He is now based in the Hartnett Enterprise Acceleration Centre next to LIT.

“I am on the New Frontiers programme. I am in phase two of that – that is finishing up in December and by the end of it I am hoping to have a full business plan created and be investor ready.”

Robert’s intention is that the system which currently operates through a separate piece of hardware with the messages being sent via text messages to phones, will be developed into app form so that it can be downloaded to Android tablets. It is not just limited to autism, it can be adapted to any non-verbal disability; stroke, Alzheimer’s, dementia and Parkinson’s.

He is hoping that his invention will go international.

“It is a very simple idea – and came about from being in the right place at the right time. That’s all it was.”