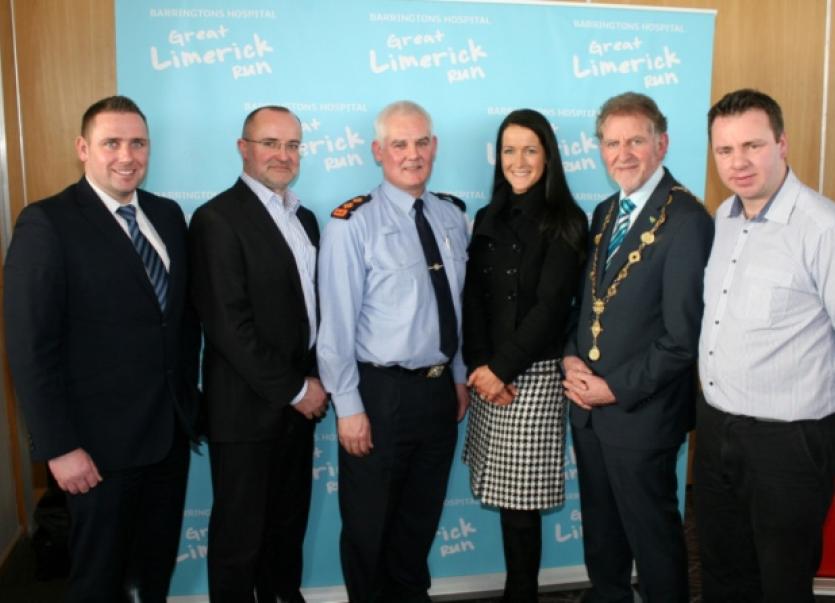 ONE of Ireland’s largest mass participatory events, the Barrington’s Hospital Great Limerick Run, is estimated to deliver a welcome €4.5m boost to the local economy this year.

ONE of Ireland’s largest mass participatory events, the Barrington’s Hospital Great Limerick Run, is estimated to deliver a welcome €4.5m boost to the local economy this year.

Launched this week in the Strand hotel, the organisers of the sixth annual run expect to exceed last year’s numbers of 12,200 based on the huge level of early registrations.

Over 2,100 people from across the country have already signed up over various race distances for Limerick’s biggest run on Sunday, May 3, some 14 weeks away.

Speaking at the launch, race director John Cleary said there are many reasons for the continued success of the event, and said he hopes more than 13,000 people will take part this year across a series of races.

“We have to acknowledge the huge levels of support from the people of Limerick and beyond who have demonstrated that the Barrington’s Hospital Great Limerick Run is now firmly established on the Irish sporting calendar,” he said.

“The public private partnership model has allowed us as race organisers to deliver a world class event to Limerick with an economic value in excess of €4 million to the local economy, according to the latest Council Economic impact report.”

Denis Cahalane, managing director of Barrington’s Hospital, said the event was a natural partnership for them in terms of promoting a physically healthy and active lifestyle.

“We are proud to continue our title sponsorship of an event that promotes Limerick in a positive manner on a national and international scale,” he added.

Since the inaugural race in 2010, over 41,000 people have crossed the finish line raising €1.1 million for various charities, while simultaneously contributing some €10 million to local and regional business.

Special Olympics Ireland is the official charity partner for the Barrington’s Hospital Great Limerick Run for a second year running.

On average, 2,284 bed nights are created with 100% hotel occupancy on the night before the event, and most people from outside the region spend two nights in the city. Some 49.6% of participants claim the event was the main reason why they started exercising.

In anticipation of the demand for places in the children’s ‘UL Sport Run for Fun’ which takes place in the University of Limerick on Saturday, May 2, capacity has been increased to accommodate 3,000 children. This event has to date raised over €50,000 for those primary schools with participating children. A new ‘App’ for the event will also be launched shortly. See greatlimerickrun.com