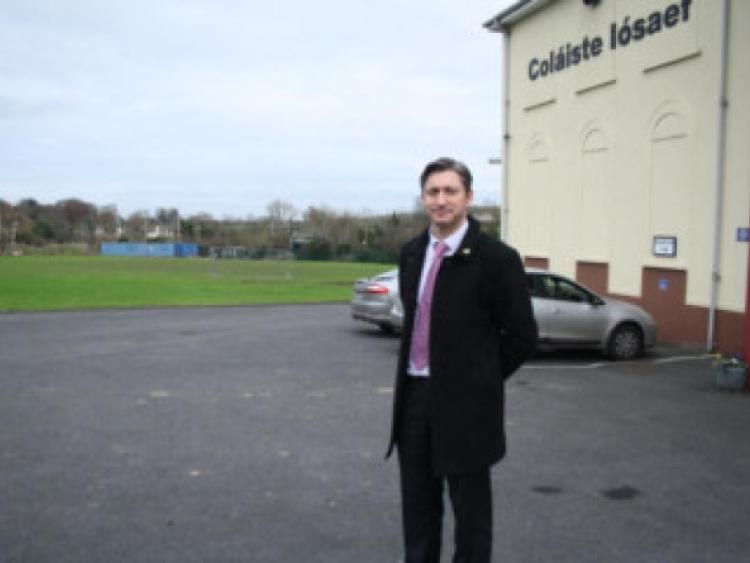 THE secondary school building in Kilmallock will be more than double its current size when a new-state-of the art extension is completed in 2015.

THE secondary school building in Kilmallock will be more than double its current size when a new-state-of the art extension is completed in 2015.

The Minister for Education and Skills, Ruairí Quinn, TD, has announced that Colaiste Iosaef is one of 70 school projects which are scheduled for construction in 2014.

“Our school enrolment has grown steadily over the last few years and the building we are in clearly isn’t capable of holding the numbers we have at the moment. In addition to that, demographics in the local primary school point to growing numbers in the future,” he added.

The school currently has 540 students. In 2009, there were 180 students in the school. The big increase in numbers can partly be attributed to the closure of Ard Scoil Mhuire secondary school in Bruff. When the extension is completed in 2015, the school will be able to cater for 650 students.

The extension will be built on campus to the left of the current school building. It will be partitioned off allowing construction to take place while the school continues to run as normal.

“It will be even bigger and more spacious than the current building and when finished both will be connected through an adjoining covered walkway,” explained Mr Twomey who said it will make “a huge difference” to students, staff, and teachers who have their own subject specific room equipped with the latest smart technology.

The new school building will also have a state-of-the-art gymnasium with an additional fitness suite, a new multimedia laboratory, a new language laboratory, two new science rooms, a new lecture theatre, a new music and drama room and a technology room as well as numerous new classrooms and a new staff room.

“In a way it’s apt because in the last month we celebrated 80 years of education which began with the Sisters of St Paul in 1933 and now we look forward with hope to the future under the Education and Training Board,” continued Mr Twomey.

In 1971, the secondary school, then known as St Joseph’s becoming co-educational.

The attendance numbers began to grow and eventually in 1980, due to the large increase in day students, the boarders were phased out so that the dormitories could be converted into classrooms.

“We will be marrying the best of our tradition with the best facilities offered by modern technology,” said Mr Twomey.

It should be open for the first year students enrolling for 2015, which won’t be long coming around and will give the parents, staff and students of Colaiste Iosaef a school building to be proud of.”

Some €470 million will be spent on primary and post-primary infrastructure in Ireland next year.