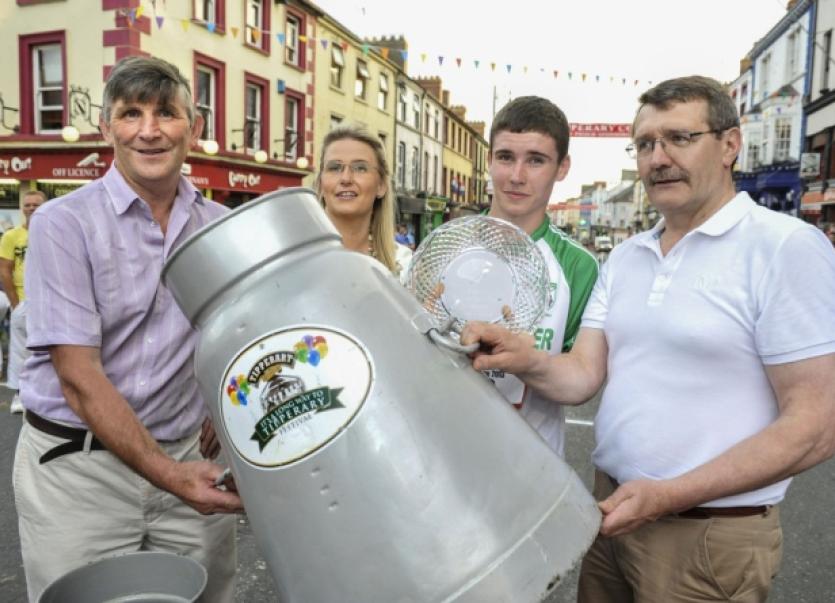 AN ALL-IRELAND Churn Race, which must have felt like a long way for competitors, was one of many fun events during the Tipperary Co-op It’s a Long Way to Tipperary Festival.

AN ALL-IRELAND Churn Race, which must have felt like a long way for competitors, was one of many fun events during the Tipperary Co-op It’s a Long Way to Tipperary Festival.

The weather smiled on the 10 day festival that attracted thousands to Tipperary Town. Young and old were treated to a packed schedule of nostalgic, music, art and heritage events with the town being transformed into the bygone era of the early 1900s.

On Sunday, the flagship vintage Gathering event called Meet Your Great Grandparents gave visitors the experience of what it would have been like for their grandparents living in Tipperary at the turn of the last century.

The Pride of Tipperary and a laser light display at dusk also captured the imagination.

On Saturday, the grand finale of the All-Ireland Churn Race 2013 featuring teams from local sports clubs took place. After a very close race, Shane Ryan from Lattin was crowned the National Churn Racing Champion. He was presented with the trophy by Ted O’Connor, general manager of Tipperary Co-op, main sponsors of the festival again this year.

Initial results of a survey of those enjoying the festivities revealed that 36 per cent travelled at least 20 miles to Tipperary Town, with many from Limerick.

“We genuinely thought the success of last year’s festival would be hard to beat, but thanks to the dedication of the organising committee, the scores of volunteers – and of course the glorious weather we have enjoyed this year’s festival I believe will go down as one of the best on record.

“The festival is a way for us all to celebrate everything great about our region, our community, our enviable way of life, living in one of the most bountiful farming regions in Ireland. We in Tipperary Co-op are honoured to be playing our part in supporting the festival which gives everyone who loves Tipperary a good reason to come out and gather, as well as a great excuse for our many friends and relatives to visit during the celebrations,” said Mr O’Connor.