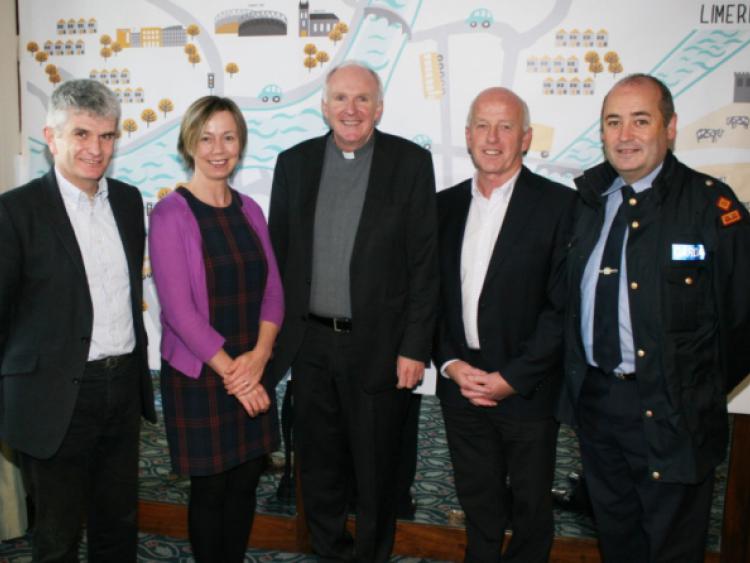 A group of people from the worlds of business, the arts, sport, politics, education and religion came together in the city this week to address the question: Limerick: What is our Mission?

A group of people from the worlds of business, the arts, sport, politics, education and religion came together in the city this week to address the question: Limerick: What is our Mission?

The gathering was hosted by the Bishop of Limerick Brendan Leahy in order to facilitate discussion on the future of Limerick ahead of the diocesan Synod, which takes place in April 2016.

“The purpose of the gathering is to offer this moment of dialogue so that the Church can make informed decisions as it moves forward in its mission at the service of the city. I would hope the occasion would also be of mutual benefit to the participants in their own reflection,” Bishop Leahy told the meeting.

“I am very conscious that the Synod is occurring in a context of new energy and focus in Limerick regarding the city and county’s future. I attended the launch of Limerick 2030 - An Economic and Spatial Plan for Limerick, which Mr Conn Murray described as ‘a once in a generation plan to guide the economic, social and physical renaissance of Limerick city centre, the wider county and Mid-West region.”

Bishop Leahy spoke of Pope Francis’ view that the Church exists to promote a “culture of encounter” at the service of society as a whole. In this context, the role of the city in opening up channels of communication between people was increasingly important.

“The Bible starts with a garden (the Garden of Eden) and it concludes with a city (Jerusalem),” he added.

The discussion was facilitated by Dr Lorna Gold, head of policy and advocacy with Trocaire and formerly of the Department of Politics at the University of York.

She pointed out that the participants at the meeting represented a “broad swathe of the civic life of the city”.

The event included a series of round table discussions during which participants were asked question such as ‘when have you seen Limerick at its best’ and ‘what role can the church play in addressing the issues facing Limerick’.

Some of Limerick’s more positive values identified by the participants included openness, partnership and social interaction.

However, she pointed out that there had been a number of “intractable issues” that had also been identified. These included social segregation, crime and a perceived lack of safety.

Other topics discussed during the course of the meeting included education, the role of young people, crime, mental health, social disadvantage, arts, culture and the physical layout of the city.

A number of people commented on the need to include more young people in discussions about the future of Limerick.

Speaking at the end of the meeting, Fr Eamonn Fitzgibbon, director of the Synod, stressed the need for the Church to have an open dialogue with the wider world.

He pointed out that six themes had been selected for the Synod, many of which had also come up for discussion at Tuesday’s meeting. These are family, community, young people, education, new models of leadership and ‘Liturgy and life’.

“We need as a Church to open up a dialogue; we need to be a listening Church,” he said.

He also noted that education and equality of opportunity were recurring themes in the discussion.

“The church should be a focus for advocacy, agitating for equality and inclusion,” Fr Fitzgibbon added.

Bishop Leahy described Tuesday’s meeting as “very useful and very valuable” and thanked everyone for taking part. “This has been a really useful process and we will take much away from it. We have heard a lot today about the need for the Church to engage with young people, in particular, and we have definitely done that through the Synod Listening Process but we need to and will continue that.”