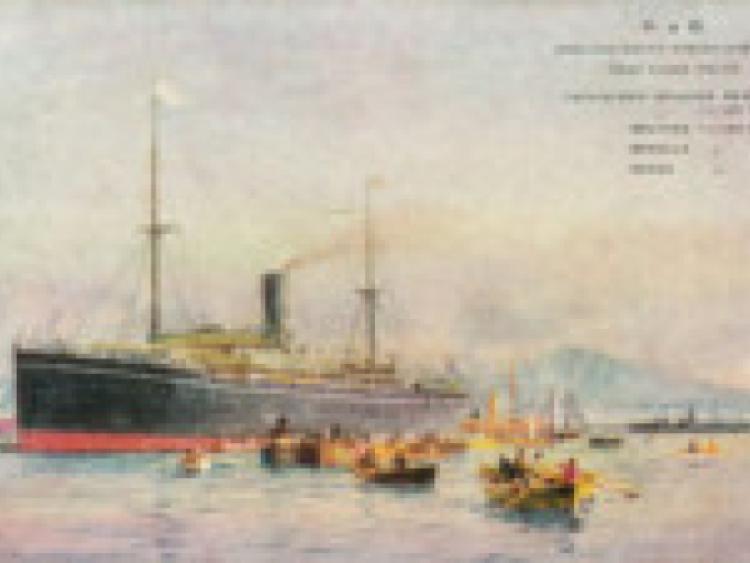 SUDDENLY everyone, even those who, like myself, absolutely abhor the glorification of any war, foreign or native, seems to have a story to tell of the Great War on the centenary of that cataclysmic event. It’s like a massive outpouring of a grief we didn’t even know we had. I certainly didn’t, and, for what it’s worth, I do have a story.

SUDDENLY everyone, even those who, like myself, absolutely abhor the glorification of any war, foreign or native, seems to have a story to tell of the Great War on the centenary of that cataclysmic event. It’s like a massive outpouring of a grief we didn’t even know we had. I certainly didn’t, and, for what it’s worth, I do have a story.

I found a faded postcard in a drawer at home when I was 12 years old, and if anyone had told me then that over 50 years later it would be one of my most treasured possessions, or that I’d be bursting to tell the story behind it, I’d never have believed them.

It sparked my curiosity then, with its romantic picture and almost indecipherable handwriting, some of it blotted out, but I had to curb that curiosity for some time, because I wasn’t supposed to be searching the drawer in the first place. I had squandered all my Confirmation booty in a flash and was reduced to combing the house for loose coppers to make up the price of a comic.

As soon as I got a chance, I asked my father where the card had come from and I was terribly disappointed to learn that it had been sent from the Western Front by an Australian first cousin to a woman, long dead, of whom I had never even heard. I’d have preferred if it had come from Kilkee. Holiday postcards had an exotic allure for a 12 year old then that a card from the Front could never have equalled. My best friend showed me a postcard once that she had received from an aunt holidaying in Kilkee. It was my first glimpse of the Atlantic Ocean, but I felt diminished when she showed it to me. My own relations seldom went on holiday and even when they did, they didn’t send cards. I had status anxiety long before the phrase was coined.

I had forgotten about the postcard until a few years ago, when one day I was shown a copy of the ‘Daily Mirror’ dated May 3, 1917. There on the front page was a photograph of a young man, dressed in civilian clothes with a cigarette in his mouth, left hand on hip and right arm raised defiantly aloft in a jaunty display of bravado. The pose was understandable, for young Michael Joseph Kearns – known to his family as Joe, and then 26 years old – had just survived the sinking of the Australian troopship ‘The Ballarat’, which had been torpedoed by a German submarine in the English Channel on Anzac Day, April 25, 1917.

I was enthralled when I saw the newspaper. Here was the man who had sent the postcard that I still had in my possession. His mother was my grand-aunt and I found it all very moving. But I have to say I burst out laughing when I saw the caption. It read: “Gunner Kearns from New South Wales, who played the piano as the ship was sinking”.

Further research revealed that Gunner Kearns had been widely applauded in newspapers in Britain and Australia for his part in helping to maintain discipline on the stricken ship as rescue boats rushed to the scene. He played ragtime music to the end and was one of the last to leave the vessel, which was evacuated without the loss of a single life.

He must have felt lucky when that ‘Daily Mirror’ picture was taken on the quayside. But unfortunately, luck did not remain for long at the side of Gunner Kearns. Just five months after the sinking of the troopship, he was fatally wounded by shellfire as his Company, the 9th Australian Machine Gun Corps went into action in the third battle of Ypres. He lies in a marked grave at Brandhoek New Military Cemetery in Belgium.

In the months between his rescue and his death, he and his brother and a cousin paid a visit on furlough to the place in the parish of Killoscully – Pat Shortt’s fictionalised village - where their mothers, Delia and Hannah Kennedy, were born. Contrary to local feeling about the war, they were welcomed with open arms and during a visit to their cousins, Joe met the girl to whom he sent the postcard from the front just a couple of weeks before he was killed.

The story, I know, has little enough to do with Limerick, and I’m also conscious of the fact that there is more Limerick DNA in the soil of the former battlefields of Europe than there is of most other counties. However, this story originated not far from the Limerick/Tipperary border and the family involved once supplied butter to the Limerick butter market - but then so did half of Munster, so let’s not get too parochial.

The postscript, however, is universal, and reveals, to some extent, the futility and false morality of war. Three years after the visit of the Anzac soldiers to their ancestral homeland, my grandparents’ home near Nenagh was raided by the Black and Tans. Three members of the family were members of the Tipperary Number One Brigade of the IRA. As the rest of the family huddled outside, the house was ransacked. Suddenly, out of the blue, the search was called off. Among the documents the raiders had found in the house was a letter written three years earlier, which had come from Australia, informing my grandmother that her nephew, Joe Kearns, whom she had met for the first time that summer, had been killed fighting with the Imperial Australian Army on the battlefield at Ypres.