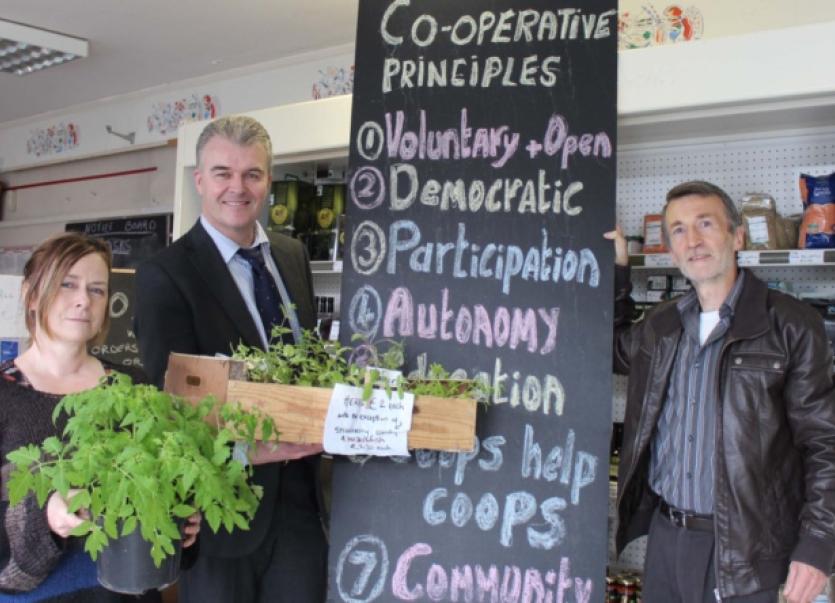 A PIONEERING community grocery has been selected as the Limerick Leader’s entry into the national Get Involved sustainable community competition.

A PIONEERING community grocery has been selected as the Limerick Leader’s entry into the national Get Involved sustainable community competition.

The Limerick Community Grocery co-operative, based at the old Esso garage in Mulgrave Street, was picked to represent the Limerick Leader in Get Involved.

This is an initiative developed by the Regional Newspapers and Printers Association of Ireland and sponsored by the Sustainable Energy Authority of Ireland. It is designed to promote voluntary sustainability projects aimed at creating jobs.

The winning project – drawn from towns and cities across the island of Ireland – will be awarded a bursary of €5,000, while two further bursaries of €1,000 each will be presented to the two runners-up.

However, it is different from most other foodstores in that it is Limerick’s first co-operative.

Put simply, this means any money the company makes is instantly ploughed back into the business.

As well as this, all staff members have a direct say in how the company is run.

The team at the community grocery - which has grown from 10 in 2012 to more than 220 now - has exciting plans for the future, such as making it a five-day-a-week full service operation.

Until now, members had to fill in order forms and pre-order the goods they wanted.

One of the most active members of the co-operative, Bill Kelly, said they will be revamping the whole store in the late summer, or early autumn to make this part of Mulgrave Street a “co-operative hub”.

“We will be gutting the existing building, and really kitting it out. This is the next phase of our redevelopment,” he said, “It will coincide with the store opening five days a week. It will probably open from 9am to 7pm or 8pm in the evening, but that is to be decided.”

Before that, the co-operative will take part in ‘Street Fest’ by opening its base in Mulgrave Street this Sunday between 1pm and 3pm.

“We will have food, face painting, and entertainment for children and adults. It will be a good way to launch our Get Involved campaign,” Bill said.

An average of five people a week are joining the community grocery each week, and the profile of its members is diverse, ranging from Irish to Greeks and Italians.

“It is a cornucopia of Limerick people. You would have everyone from retired folk who want to give something back. You would have folks who are working full time and part time, and those who are unemployed,” says Bill.

In order to help the unemployed, the grocery is investigating working with PAUL Partnership to allow those on benefits to receive top-ups when they volunteer in the co-op.

The team at the grocery has received help from a number of other successful initiatives across the world, including Mondragon in Spain, Dublin’s Food Co-op, and Manchester’s Unicorn Grocery, and the Park Slope Food Co-op in Brooklyn, New York.

On July 12 next, the latter will lead a group of co-operative companies from the USA in holding a seminar here in Limerick, with the main speaker being Anne Herple, the co-ordinator of the Park Slope, which Bill describes as “the single most successful co-operative in the USA”.

Being selected to represent the Limerick Leader in Get Involved, he says, is a “vindication of what we are about”.

Leader editor Alan English added: “It is a terrific initiative which we are delighted to be supporting and highlighting as part of the Get Involved initiative. I’d very much encourage our readers to get involved themselves - here is an idea that can be embraced by so many people and the benefits that it can bring are numerous.”