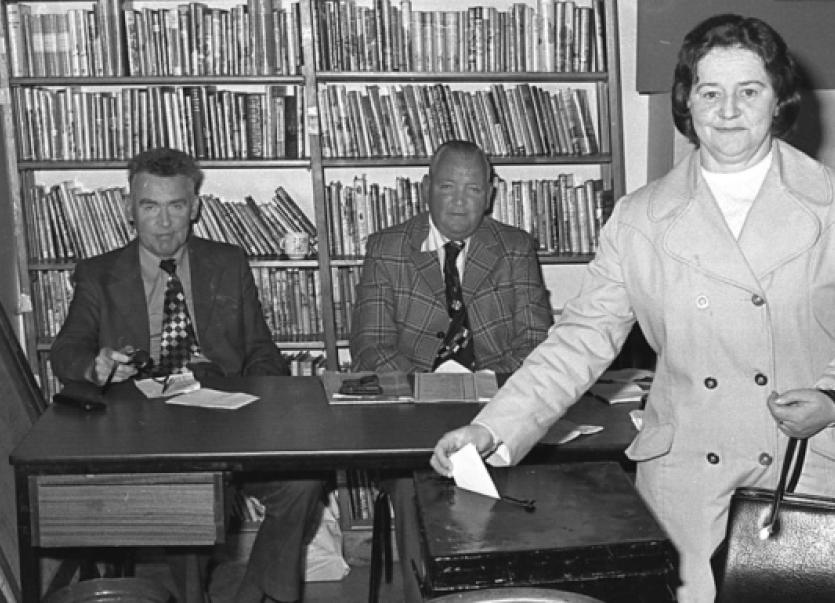 SEVERAL canvassers have already arrived at the door in advance of the forthcoming Local Elections, but although they all leave me some literature to peruse, none of them even mentions the V word. I have to presume that they’re looking for my vote because I haven’t seen them since the last election. But they are afraid to ask, it seems.

SEVERAL canvassers have already arrived at the door in advance of the forthcoming Local Elections, but although they all leave me some literature to peruse, none of them even mentions the V word. I have to presume that they’re looking for my vote because I haven’t seen them since the last election. But they are afraid to ask, it seems.

One batch calls in the middle of ‘Fair City’ which means that I have to rewind when they’re gone. In Britain canvassers are advised not to call on anyone in the middle of ‘Eastenders’. Such sensitivity is to be commended.

They introduce the candidate and go on to engage me in small talk enquiring how I’m doing, how the family is getting on and then, eyeing a gap in the hedge where a gigantic evergreen has recently been uprooted, they wonder if the storm “did much damage around these parts”. Maybe I’m paranoid, but sometimes I think I’m being hypnotised on the doorstep and my genetic political leanings are being manipulated while I’m in the trance. The vote itself, however, remains the great unmentionable. What’s more I don’t even get to ask them if they want it.

The fact that they don’t ask me directly to vote for their man or woman is a bit disconcerting, to say the least. They used to say “Don’t forget us”. Now they try not to give any impression that they might be looking for anything at all. This should come as a huge relief to me because I hate saying ‘no’, and I can’t, even at this advanced stage of my life, tell a lie without blushing. But somehow I feel democratically diminished. If they didn’t call at all I suppose I’d be devastated. But since they don’t ask the relevant question, I can’t even tell them about the gaping hole down the road that was once half the bridge over the river. I need them to be beholden to me, or at least act as if they might be when they get in. For all that, I have to admit that there was a time when I used to hide from election canvassers who asked upfront for my number one, or at least my next preference. Now I realise that it’s been an awful long time indeed since anyone asked me straight out for my vote.

I know it can’t be easy on the local election trail right now, what with the revised boundaries and all the hostility being whipped up over property tax, water charges, threats to the local post office and strings of gaping potholes playing havoc with the springs of the car.

Maybe we should count ourselves lucky that any candidates risk calling on us at all. Some people I know, deeply frustrated by the political system in general and by politicians in particular, erect pre-election signs in their front lawns vehemently declaring ‘No Canvassers’ or ‘Beware of the Alsatian’ - which apparently is even more effective. But democratically speaking, the signs achieve nothing. Others lie in wait for the candidate and his entourage, having stored up a virtual arsenal of verbal ammunition which leaves the unfortunate callers shell-shocked. I don’t think anyone asks them in for tea anymore.

Door to door election canvassing, however, is getting more subtle and less straight forward. On the best organised canvasses, participants are advised on how best to handle difficult situations and belligerent electors. They’re told never to pretend they have the answer to a voter’s problem, but to take a note and tell them they’ll get back to them. They are urged to smile and stay positive even in the face of aggression, but never to extend a hand unless the voter offers his or hers first – which explains why they’re not even shaking hands with me, not to talk of neglecting to ask straight out for my vote.

Face to face canvassing is a science in its own right and one of the very few traditions that hasn’t been overtaken by social media.

For that alone, I think the practice deserves our wholehearted support. In a recent study in the US, door to door canvassing was found to be the most consistently effective and efficient method of mobilising voters. Whether it captures the vote for a particular candidate is another matter, but it has been proved that people remember a face that called on them when they see it again on the ballot paper. It’s called the recognition factor.

However, it isn’t as if canvassing was ever a forum for straight talk or real human interaction. Back in the day, when gut level communication was practiced with greater fervour, I remember doing an interview with a former politician whose career spanned several decades of the early years of the State. He relished the canvass trail, he told me, but boasted that he never asked for a vote. “I’d just say will you give me an ould scratch”, he explained.

Numerous guides and tips for canvassers have been compiled, particularly in the US, and quite a few of them advise not asking straight out for the person’s vote, because apparently that can give the voter some delusion of power.

Maybe that’s what I miss when I answer the door to the canvassers now.