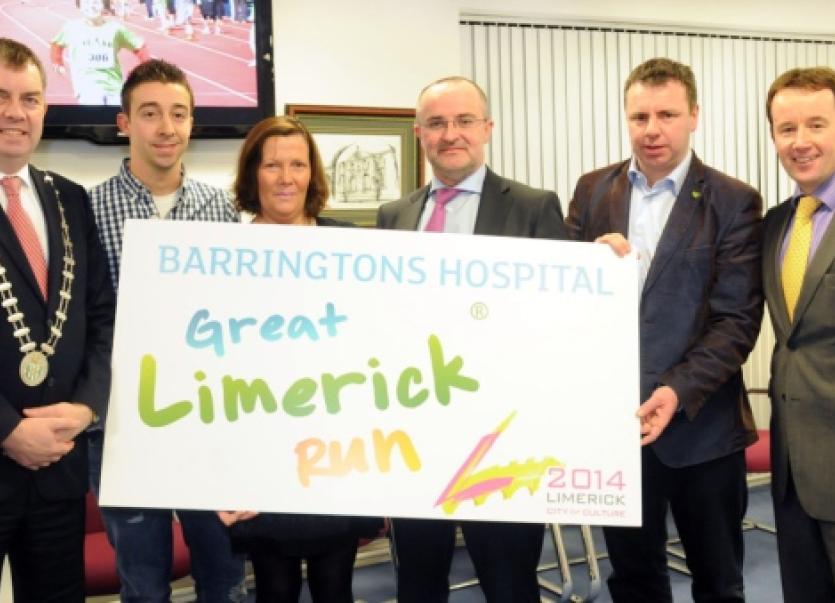 THERE are just 14 weeks to go to the fifth annual Barrington’s Hospital Great Limerick Run, with over 1,100 entries already received for the event on the May Bank Holiday weekend.

THERE are just 14 weeks to go to the fifth annual Barrington’s Hospital Great Limerick Run, with over 1,100 entries already received for the event on the May Bank Holiday weekend.

The event, which now includes five races, was launched this week in City Hall by Mayor Kathleen Leddin and Cathaoirleach John Sheehan. Now established as a highlight on the national sporting and social calendar, this year’s event takes place on Sunday, May 4 through the streets of Limerick.

In just four years race numbers have reached over 11,200 and this year’s race will include the hugely popular marathon team relay, and kids fun run, in addition to the full marathon, half marathon and six mile events.

With many people now taking advantage of the early entry discount prices, the 2014 run will once again form the centre piece of the Riverfest festivities that make Limerick the place to be over the May Bank Holiday weekend.

Speaking at the launch, John Cleary, race director, said: “Limerick, more than any other city in the country, is renowned for its sporting excellence and our objective remains to create a world class running event in our native city”.

Denis Cahalane, managing director of Barrington’s Hospital, said the event was a natural partnership for Barrington’s hospital in terms of promoting a healthy and active lifestyle. “We are proud to be title sponsor of an event that continues to promote Limerick in a positive manner on a national scale,” he said.

Labour city councillor Joe Leddin, also co-organiser of this event, said they have continued to review and introduce new additions every year to ensure that those participating have a memorable positive experience.

“After the success of last year’s event we made the decision to open registrations for 2014 immediately in May and that has given us a head start in terms of overall numbers. Of particular interest is the current strong growth in the half marathon race numbers, which is a possible reflection in many previous runners now progressing from the six mile race,” he said.

“The run brings great colour and excitement to the city not just on race day but also in the weeks and months building up to it as every neighbourhood becomes a training ground for experienced and novice runners alike. Our objective has always been to reach 15,000 by 2017 and we are well on the way to fulfilling this target. What makes the Barrington’s Hospital Great Limerick Run unique is the inclusiveness from the marathon runners, to those trying a half marathon and finally to those choosing the 6 mile race,” he said.

He said Limerick could benefit economically by in excess of €20 million per year if a “co-ordinated and professional festivals strategy in partnership with the private sector was implemented”. Based on previously commissioned reports the run is now generating in excess of €3m for the local economy.

“We have seen with the success of Riverdance that people will support events that are organised and marketed professionally to a local and national audience,” he said.

CEO of Special Olympics Ireland, Matt English, confirmed their partnership with the run and said it would be one of their largest fundraising events towards ensuring the Special Olympics Games takes place in Limerick this June.