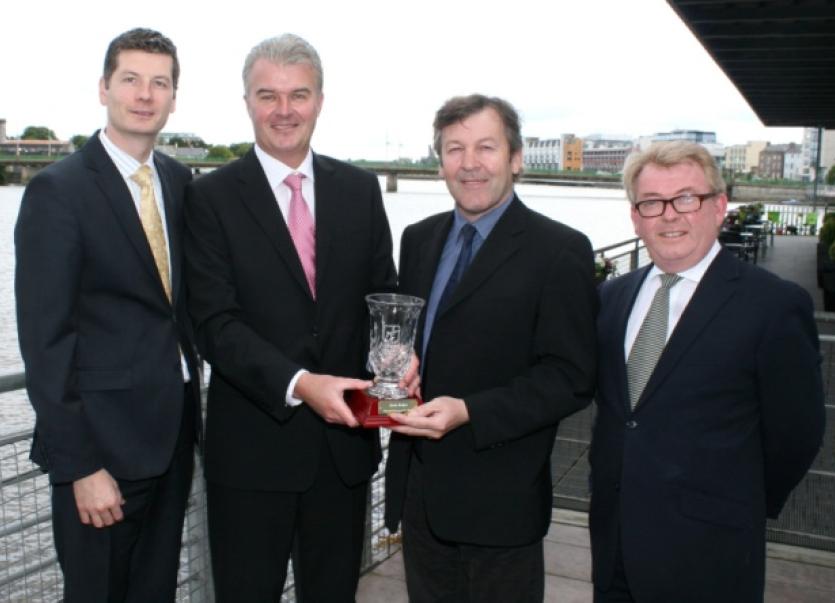 RACEHORSE trainer Enda Bolger has been named the Limerick Person of the Month after achieving an elusive treble with hunter chaser On The Fringe which triumphed at the three major spring jumping festivals.

RACEHORSE trainer Enda Bolger has been named the Limerick Person of the Month after achieving an elusive treble with hunter chaser On The Fringe which triumphed at the three major spring jumping festivals.

On the Fringe became the first horse since 1993 to win the Cheltenham and Aintree hunter chases in the same season and then went on to achieve the remarkable treble by also winning in Punchestown, making him the first horse to win at the three courses since the great Sprinter Sacre in 2013. The record had previously been broken by the JP McManus-owned Istabraq in 1999.

“It’s a privilege and an honour to receive this award. At least we know we were doing something right during the year,” smiled Enda this Monday as he was presented with the person of the month award at the Clarion Hotel.

“When you look back on winning at the three main festivals it was great and there was only about a fortnight between each of them as well. He done it great and he is on his summer holidays now,” said Enda of the JP McManus-owned On The Fringe.

At the beginning of the season, Aintree was the race the hunter chaser was being geared towards, rather than Cheltenham, so what happened at Prestbury Park in March was “a massive surprise” says Enda.

“We knew he was well going into Cheltenham but we didn’t expect him to win the way he won - by 17 lengths.”

Enda actually won the same prize as a jockey 19 years ago on Elegant Lord, which he also trained.

In Aintree in April, On The Fringe gave Nina Carberry a dream outing over the Grand National fences. Up against 28 rivals over famous fences including Bechers Brook and The Chair, he jumped perfectly all the way around.

For Enda it was the highlight of the jumps season.

“Nina gave him a beautiful ride. For me, the biggest thrill out of all the winners this year was him winning at Aintree. I was really looking forward to it – there were almost 30 runners in the race so Nina had to get him up there and get him out of trouble but they got into a lovely rhythm and she produced him just at the elbow, just at the right time with less than half a furlong to go and he went away and won his race. It was great – he never missed a beat with regards to the jumping. He was brilliant.”

The season was sealed with a sparkling performance on Irish soil for On The Fringe on May 1 in Punchestown, again with Nina on board.

“Nina gets on really well with him and previously John Thomas [McNamara, who sustained a serious injury in the Cheltenham Festival of 2013] used to ride him.”

While all the horses get the same treatment, the better horses, Enda says, produce the goods when the pressure is on.

“We trained them the same as we do every year but the good horses do the talking for you – they do it on the day,” he asserts.

And while the jockey, trainer, owner and wider winning connections take great satisfaction from a big win, the horse itself also knows when it has produced something special.

Enda, who is originally from Graiguenamanagh in County Kilkenny, has lived in Limerick since 1985.

He was about 20 when he made the move as a result of a recommendation made to him by legendary trainer, Paddy Mullins.

He paid tribute to all the people working behind the scenes to ensure that On The Fringe, Gilgamboa and indeed all their stable companions – the majority of which are owned by JP McManus – are in tip-top condition when National Hunt season comes around.

“I have great people around me – great people that I work for. The horses come back to me in great shape from Martinstown every summer. Our job is just to get them fit – we have great riders. It’s a big, big team effort – it’s not just Enda Bolger. I want to thank my neighbours at home because they are a big help to me – they allow me to take the horses through the farms.

“Let’s hope that we can repeat some of this year’s success next season.”