Council honour for The Balbec and Ballylanders 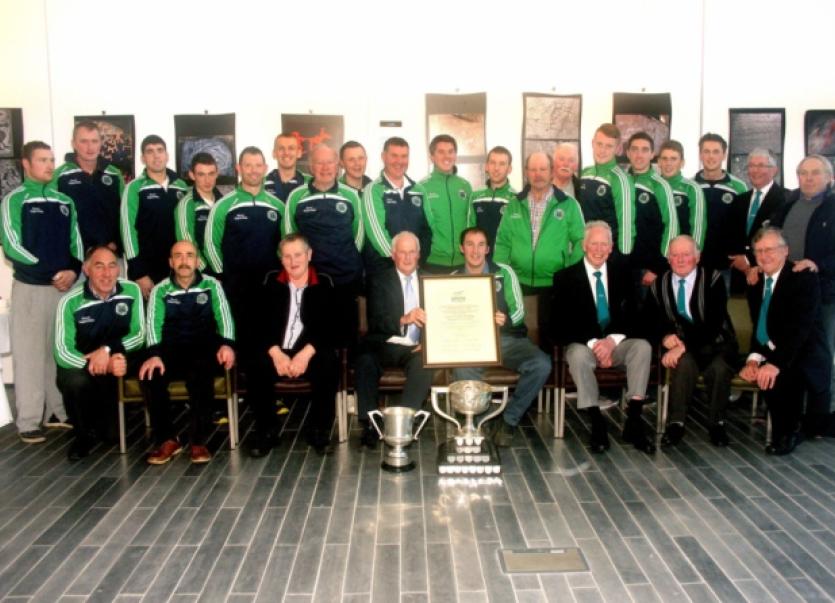 THE BUZZ and sense of exhilaration felt in both Kilmallock and Ballylanders after their hurlers and footballers claimed the county titles in October was still tangible late last week at a reception hosted by Limerick City and County Council to mark their achievements.

THE BUZZ and sense of exhilaration felt in both Kilmallock and Ballylanders after their hurlers and footballers claimed the county titles in October was still tangible late last week at a reception hosted by Limerick City and County Council to mark their achievements.

Players, past and present, members of the management and club officials from both teams gathered at the council offices in Kilmallock,(Áras Mainchin Seoighe) for the celebratory occasion.

The teams were presented with a commemorative scroll by Cllr Eddie Ryan, the cathaoirleach of the Cappamore-Kilmallock municipal district.

“This reception was scheduled for a week earlier but because Kilmallock were in the Munster final we held off. It all worked out a treat for them - we had a bigger cup and more to celebrate,” smiled the Galbally-based councillor.

“Between Ballylanders and Kilmallock we were absolutely thrilled that two senior county titles came to our municipal district area,” continued Cllr Ryan.

“We thought it only fitting that we should honour them. We have to follow up now with the Bruff Intermediate hurlers and Murroe-Boher junior ladies football team. We look forward to having them in, maybe not before Christmas but certainly after it.”

The scroll presented to the teams was signed by the seven local councillors.

“I think we need to recognise sport as being a great thing in Ireland. It keeps the whole place going and it gives us all a buzz. The lift the wins have given the areas in the county has been great - we are thrilled for them. It is also a time to remember the achievements of those who have gone before you - it’s lovely to reflect on it - absolutely lovely.”

Steven Connery, chairman of Kilmallock GAA club, said the reception was “very much appreciated by the club”.

“It is a nice acknowledgement from higher authorities for the work that is being put in. We had a good turn out - a good lot of players attended,” he said, adding that the Kilmallock team returned to training this Monday night to continue with their All-Ireland campaign.

“It’s great to be recognised by the council. They all spoke glowingly of both recipients. Really and truly, it was a wonderful occasion to be in Kilmallock and to have the two county cups and the Munster cup present. It’s a day that doesn’t come around often enough.

“Kilmallock is a long-established club. They drive on their club very, very well and we see ourselves trying to reflect what they are doing.

“This year has been a very historic year for us with the return of the Fr Casey Cup and with the completion of our new facility. In 12 short months, there has been a seismic shift in the club - all for the good.”