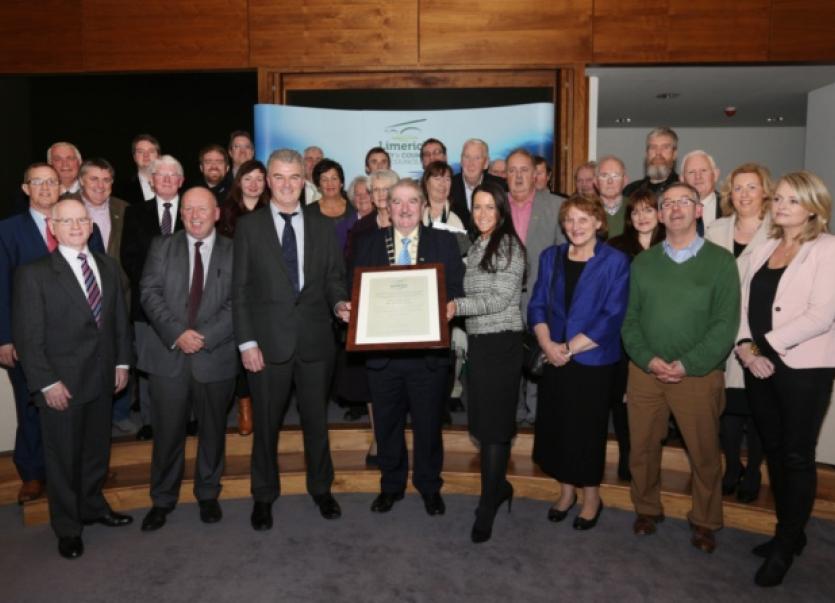 THE Limerick Leader had never, in its 125 years, lost sight of its duty to seek truth and provide a fair and comprehensive account of events and issues, Mayor Kevin Sheahan said in County Hall when he hosted a civic reception to mark the newspaper’s landmark anniversary.

THE Limerick Leader had never, in its 125 years, lost sight of its duty to seek truth and provide a fair and comprehensive account of events and issues, Mayor Kevin Sheahan said in County Hall when he hosted a civic reception to mark the newspaper’s landmark anniversary.

“If one week is a long time in politics, then 125 years of reporting on current affairs and the stories of the day is an eternity,” the Mayor of LImerick City and County Council added.

“More significantly, those who have worked there have never lost their passion for reporting or lost sight of who they are writing for. “

And he commended the paper for not taking the easy way, and courting sensationalism.

“Honesty, fairness and courage in gathering, reporting and interpreting information are what people look for in a newspaper,” Mayor Sheahn concluded.

“I think the people of Limerick are very fortunate to have benefitted down through the years from a local paper that promotes such an ethos.”

“If we didn’t read it in a week, we felt totally out of touch,” she said, describing it as a wonderful publication which was always trying to fly the flag for the Mid-West. Addressing the gathering of past and present staff members, she said: “Ye have held your own. That is an amazing feat.”

“I do trust the Limerick Leader to tell me what is happening in my local community,” Elena Secas, Labour, said, congratulating the paper on what she called its “landmark anniversary”.

Fianna Fail’s Cllr Richard O’Donoghue explained that through his late fater, his family had been readers of the Leader for almost a century. “It has stood the test of time,” he said, and he argued that all parts of our culture should be protected.

“It is great to see a media brand surviving,” Fine Gael’s Cllr Tom Neville said, revealing that he had first appeared in the pages of the paper at the age of four while Independent Cllr Emmett O’Brien described the level of journalism as fantastic, always accurate and “some of the best in the country in my view.”

Journalism, he added, was one of the cornerstones of liberty and part of democracy.

Responding to the tributes paid, editor Alan English said: “I’m proud of the newspapers we publish each week, but I am also very conscious that the Limerick Leader team of today is continuing the good work done by our predecessors going back to 1889.

“High standards were set in establishing the Leader as Limerick’s paper of record and maintaining those standards carries a responsibility we are all very aware of.

“The Leader became one of Ireland’s leading provincial newspapers because of the support it has always had from readers and advertisers across the Mid-West and in a challenging climate for newspapers like ours the continued support of both is absolutely essential but never taken for granted.

“We’ve had a great celebration of our anniversary year and I think a lot of people have been reminded of the important role the Leader has played in local life, and will continue to play,” he added.