Battle on the way for Fine Gael party nomination in Limerick 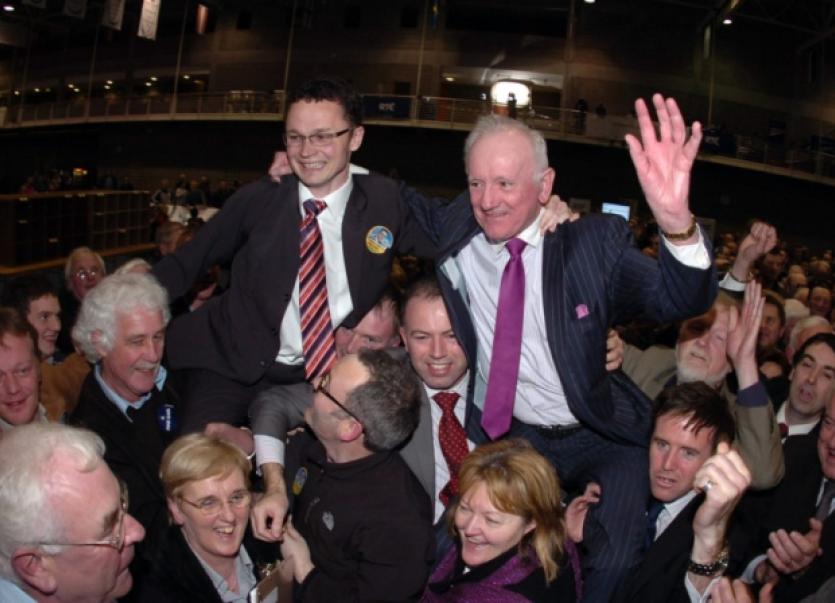 THE contest to succeed Dan Neville on the Fine Gael general election ticket is already under way.

THE contest to succeed Dan Neville on the Fine Gael general election ticket is already under way.

Just hours after Deputy Neville announced that he would not be contesting the next election, two party councillors, Bill O’Donnell and Jerome Scanlan, threw their hats into the ring. More are likely to follow suit.

When the party selection convention takes place on September 21, a number of other sitting councillors are also expected to be chasing a nomination. Fine Gael will be looking to win two seats in the newly established three-seat Limerick County constituency. But whether the party runs one or two candidates alongside sitting TD Patrick O’Donovan remains to be seen.

Deputy O’Donovan was among a large number of people paying tribute this week to Deputy Neville for his 30 years of political service to the people of Limerick and of West Limerick in particular.

The tributes were led by the Taoiseach, Enda Kenny, who said he had worked closely with Deputy Neville for many years and had witnessed his hard work and commitment to the people he represents in Co Limerick.

“On a national level Dan has been a very effective voice in the area of suicide prevention and mental health awareness,” he added. He also paid tribute to him for his role as party chairman.

Meanwhile, with over five weeks to go in the run-up to the convention, the political temperature is already hotting up as candidates jockey for support among party members to secure a nomination.

In addition to the two confirmed contestants, a number of other Fine Gael councillors have said they are considering their positions. Party leader in the council, Cllr John Sheahan, said he was thinking about seeking a nomination while Cllr Tom Neville, a son of Dan Neville, said he would be consulting with party members.

However, he told the Limerick Leader this Wednesday, it was more than likely he would put his name forward. An excellent vote-getter on his two outings at the local election hustings, Cllr Neville said he had received many calls encouraging him to seek the nomination and would be making up his mind quite quickly.

Mayor Liam Galvin, who has made no secret in the past of his desire to run for the Dail, appears to have ruled out a push for now, saying: “My priority at the moment is the position I hold. I gave a commitment to my county colleagues and the public that I will give 100% to the mayoral position.”

However, he did say next month’s convention is likely to open “a can of worms”.

There have also been suggestions in some quarters that Fine Gael headquarters could “parachute” a female candidate into the sprawling County Limerick constituency in order to comply with new gender quota legislation of 30% women.

“They may very well latch onto a woman. They know they have one seat, and they might just put a woman in here to fulfil a quota. Plus, if they ran a woman, they could very well draw an Independent vote across the county,” one Fine Gael source said. “If Maria Byrne was living in the county, there would be a great chance of her running.”

However, a report published this Wednesday indicated that with 16 more conventions yet to be decided, Fine Gael has selected 31.8% women candidates.

Cllr O’Donnell was the first out of the blocks this week to confirm he was seeking a nomination, saying: “I believe I have a lot to offer the party in their endeavour to return two seats in this election. It is vital we do this if the party is to be the senior partner in the next government.”

The Cappamore/Kilmallock councillor and well known city solicitor ran for Fine Gael in the 2011 general election when he was added to the ticket and secured 4,152 first preference votes.

But at last summer’s local elections, in the face of negative sentiments against the government parties, Cllr O’Donnell only just about held onto his council seat at the last count. Cllr O’Donnell will no doubt argue that he covers an area of the county that Fine Gael would otherwise neglect in County Limerick, with his opposition so far coming from the west. Long family loyalties may also play a part.

High-profile Glin councillor John Sheahan was also lucky to hold his council seat, a situation created mainly because of a boundary change which lost him much of his natural power base and because of intense competition for Fine Gael votes in the Newcastle West area.

But Cllr Sheahan contested the old Kerry North/West Limerick constituency in 2011 and polled a highly creditable 6,295 votes, becoming the last candidate standing when the three seats were filled. Seeking a nomination, he said, is “something which is under consideration”.

“A lot of people have to be spoken to before I make that decision - first and foremost someone at home!”

Newcastle West poll-topper Cllr Scanlan of Feohanagh, who resigned the party whip in the council but continues to be a party member said: “I believe I have a lot to offer. I come with as lot of experience in public life in the area of business.

“I think with the right candidates in the team, we can definitely hold onto two seats”.