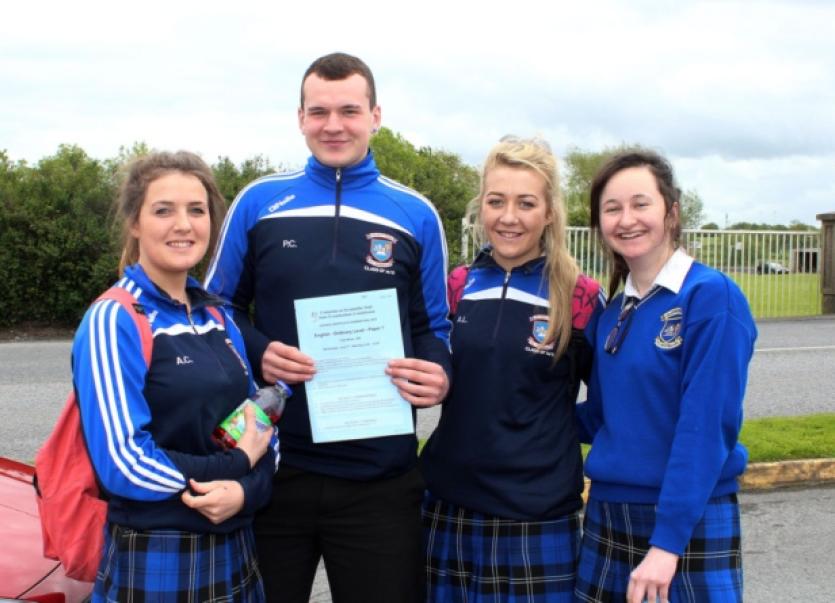 BONO, romance and the challenges of old age were just some of the topics that greeted 5,300 Leaving and Junior Certificate students in Limerick when they turned over the first paper of the State exams this Wednesday morning.

BONO, romance and the challenges of old age were just some of the topics that greeted 5,300 Leaving and Junior Certificate students in Limerick when they turned over the first paper of the State exams this Wednesday morning.

And while sitting an exam is never a nice experience - spare a thought for Shannon Meehan who marked her first official day as an adult inside the exam halls of Colaiste Iosaef in Kilmallock.

While Shannon revealed that there may be time for some cake later in the day, her focus was firmly on English paper 1, the opener of the State exam.

“It was lovely. I was really happy with it, really happy,” said the Kilmallock girl who rose from her bed at around a quarter to seven on Wednesday morning for one last read over of her notes.

“I had learned everything already so I was OK. There was a good choice of questions and the letter was really easy.”

Students were asked to pen a letter of complaint to their school principal about their graduation event being cancelled.

A speech by U2 frontman Bono to a graduating class also featured on the paper as well as an extract from a memoir by novelist Penelope Lively about the challenges of aging.

“It was an excellent paper for students to open, especially on the first day, to ease them in,” said Sean Twomey, principal of Colaiste Iosaef.

Michael O’Flaherty, 18, from Kilmallock was feeling pleased with the paper as he left the exam hall shortly after 12.30pm. The essay title on romance gave him the opportunity to flex his imaginative muscles.

“I wrote about how a romantic holiday saved my marriage,” he smiled.

While he was awake until about 1am with early morning nerves, he felt settled once he got into the exam hall and started writing.

Keith O’Brien, 18, from Ardpatrick found some of the questions a bit tricky but overall said that “it wasn’t too bad”.

“Last night I wasn’t too bad but this morning the nerves kind of got to me. I finished studying at around six yesterday evening because there was no point panicking over it and making myself worse,” he said.

His advice to students is to stay calm and not to become complacent if what they are hoping for fails to appear on the paper.

Among those to wish the students well in their examinations were the Minister for Education and Skills, Jan O’Sullivan TD, and the Bishop of Limerick Brendan Leahy.

“No doubt there’s a lot of nervousness and anticipation in the lead up to the exams, especially for those doing their Leaving Certificate. The exams are unquestionably the biggest they will have sat in their lives so far but the outcome will not define anyone,” said Bishop Leahy.

For students at CBS Sexton Street, it was a “great start to the exams”.

Leaving Cert student Eoghan Carey, who did the higher level exam, said “the paper itself was challenging but not un-doable”.

“It had interesting themes, good comprehensions and interesting essay titles. I wrote for my essay the theme of privacy and its importance in life and the threats to privacy in the modern world,” he said.

A hopeful Martin Dinan said he found his paper “easy” and that he looks forward to his Irish paper two, which starts on Monday at 9.30am.

“A good start is half the battle. At the start I was a little bit nervous and now I’m prepared for the rest of the exams,” he added.

English teacher Eoin O’Sullivan, who graduated from the school in 2005, said it was a “very fair paper this year”, and said the themes were “very relevant” to the students.

School principal Tom Prendergast said the students “are delighted to be up and running and putting pen to paper”.

So key now is really performance. Rest is important and diet is hugely important,” he added.

Thursday sees English paper two and engineering for the Leaving Cert, while Junior Cert students do Irish paper one and paper two.