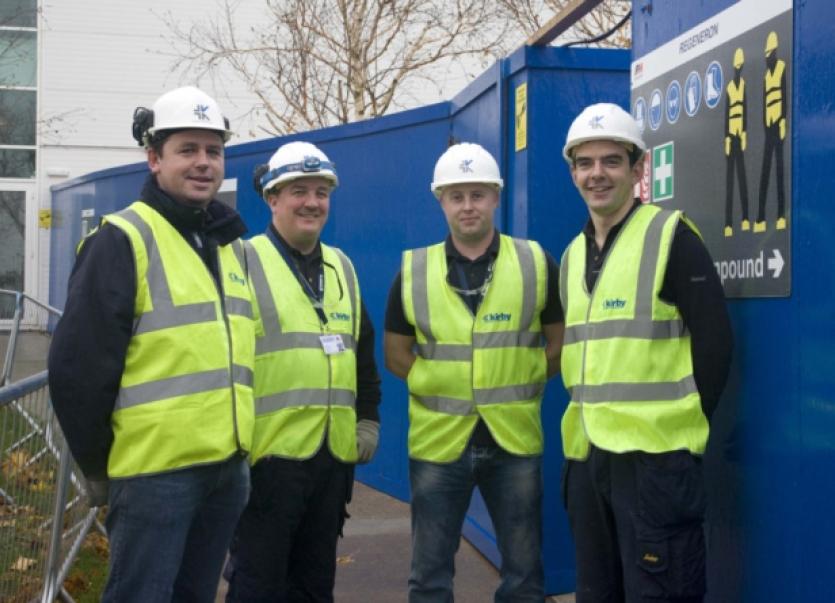 SOME of the brightest and best engineering talent in the county, who have spent many years working outside of Ireland, are returning to Limerick thanks to the new Regeneron plant project.

SOME of the brightest and best engineering talent in the county, who have spent many years working outside of Ireland, are returning to Limerick thanks to the new Regeneron plant project.

Since winning a large engineering services contract for the €240m bio-pharmaceutical plant, Kirby Group have been busy putting together their project team and bringing Limerick engineers home to work and prepare the Regeneron plant for opening in 2016.

The company which was founded in Limerick in 1964 by brothers Tom and Michael Kirby has plenty of engineering talent from the Mid-West among its 600 plus staff.

However, with Kirby Group winning new business in the UK and around Ireland in recent years, many of the staff were working far away from home. This included many who left their families and spouses in Limerick and the surrounding area.

“The company has experienced strong growth in recent years, winning significant new business both in Ireland and the UK. Turnover for 2014 is expected to be in the region of €120 million up from €90m in 2013 and €64m in 2012.

In the UK, the company has already secured over €25m of new business since the start of this year,” explained Fergus Frawley, managing director, Kirby Group.

“The flipside of this success is that many of our employees have answered our call and left their families and partners in Limerick on a temporary basis. We know that this is very tough for them and their families and we’re very appreciative of their support.”

“I’m delighted to say that our recent success closer to home with projects like Regeneron means that we can now offer many of these employees the opportunity to return to the Mid- West.”

After growing up in Moneleen, Alan Hennessy joined Kirby Group from school in 1998. After serving a four year apprenticeship, he qualified and spent the next few years working for the company on a range of projects in Limerick and the Shannon region.

When the downturn came in 2007, Kirby Group had to look further afield for new business.

As more of the company’s work was now based outside of Munster, employees like Alan had little option but to make the move from Limerick to start working in Connacht, Leinster or the UK.

Alan made the move to the UK and worked on new build power stations in both Southampton and Newport, South Wales, for four years, returning to Limerick every month to see his wife Barbara and their new son Jack. He subsequently returned to Ireland and until recently has been based on a major industrial project in Leinster.

In common with many other Kirby Group employees, the Regeneron project now gives Alan the chance to return to Limerick full time. He will be working on the installation and commissioning of the Regeneron plant over the coming period until its opening in 2016 – perfect timing too, as Alan and Barbara are expecting their second child in the coming months.

Alan is just one of a number of familiar faces who have started reappearing at Kirby Group’s Limerick offices in Raheen Business Park.

This was the location where Minister for Finance, Michael Noonan TD opened an expansion to existing facilities in September and announced the creation of 30 new jobs in Kirby Group, many of whom are now working in Regeneron.

Kirby Group is a leading Mechanical and Electrical service provider to clients within the manufacturing and life science, petro-chem, mission critical and renewables sectors. Clients include many of the largest indigenous and FDI firms in Ireland, including Intel Corp, IBM, GSK, Allergan, Alexion Pharma, Abbvie, ESB, and SSE.