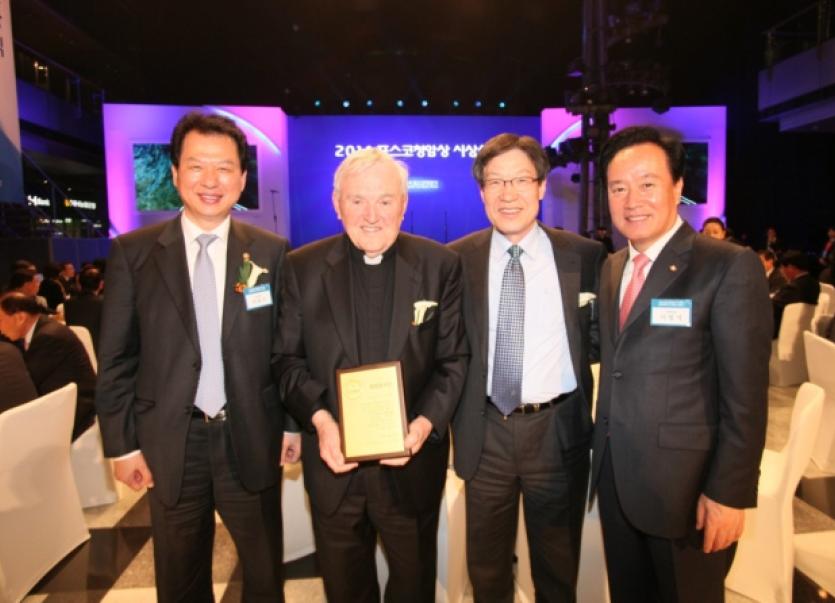 LIMERICK-BORN Columban missionary Fr Noel O’Neill has been honoured for his lifetime’s work in helping people with intellectual disabilities live a normal life at an award ceremony in South Korea.

LIMERICK-BORN Columban missionary Fr Noel O’Neill has been honoured for his lifetime’s work in helping people with intellectual disabilities live a normal life at an award ceremony in South Korea.

The Rainbow Community – a foundation started by Fr O’Neill in Gwangju, South Korea in 1981 – has been awarded the POSCO TJ Park prize for its contribution in pioneering community-based services over the last 35 years.

POSCO is one of the world’s largest steel makers and the car marque Daewoo is a subsidiary.

Born at 25 Catherine Street, Noel came from a line of post office officials - his father Larry worked in the GPO, as did his grandfather, David Gleeson.

When he was just six years of age he received an indelible impression of how “doing something for the weaker members of society was a worthwhile way of life” when he accompanied his mother to the viewing of a movie about a Franciscan missionary working in a leper colony in Africa at St John’s Pavilion.

This movie inspired Noel to embark on a missionary career.

He attended CBS Sexton Street and later Garbally College in Ballinasloe and finally to the Columban Fathers seminary in Navan’s Dalgan Park. He was ordained in 1956.

The Korean War ended in 1953 and when Fr O’Neill arrived there in 1957 the country who had been devastated was still in the throes of reconstruction.

Fr O’Neill began his mission work building up and running parishes and he continued with this for almost 25 years.

In 1981 he welcomed a few intellectually disabled people from a large institution to live with him in an ordinary residential house that was close to many facilities they would not have had access to.

Previously the only services available to them were in large segregated institutions far removed from the local community.

Fr Noel said: “Community based living was the beginning of a new lease of life for people with intellectual disabilities in Gwangju.”

At the time of setting up the community he said: “I hope to bring about a change of attitude within the family, within society, within the church and within the government.”

Since the establishment of the Rainbow Community Fr O’Neill has seen many positive changes most notably the change of attitude towards the intellectually disabled across all levels of Korean society.

The community Fr O’Neill established receives much support from benefactors and government and through this he has been able to provide residential services in locations all across the city of Gwangju.

The residents of the Rainbow Community now run their own industries with many moving on to employment in the wider community.

The Rainbow Community has been described by disability experts as a “trail-blazer and a role-model and is a remarkable and inspiring achievement quietly and steadily done without fanfare over many challenging decades.”

“A few doors down from me in Catherine Street Robby Lawlor lived who at that time trained the Limerick hurling team, so as a young kid there was great excitement in seeing Mick and John Mackey, Dick Stokes and the other hurlers visit his home. I also remember the visit to Limerick of Roy Rogers on Trigger and Gene Autrey.”

Fr O’Neill has two nieces living in Limerick Deirdre Shortt and Jackie Hynes who both work locally as nurses. When at home he still falls in line with tradition.

“I was in Limerick last year but like most Limerick people I like to spend the good weather in Kilkee.”