Martin Kiely Column - What a wonderful night for Limerick 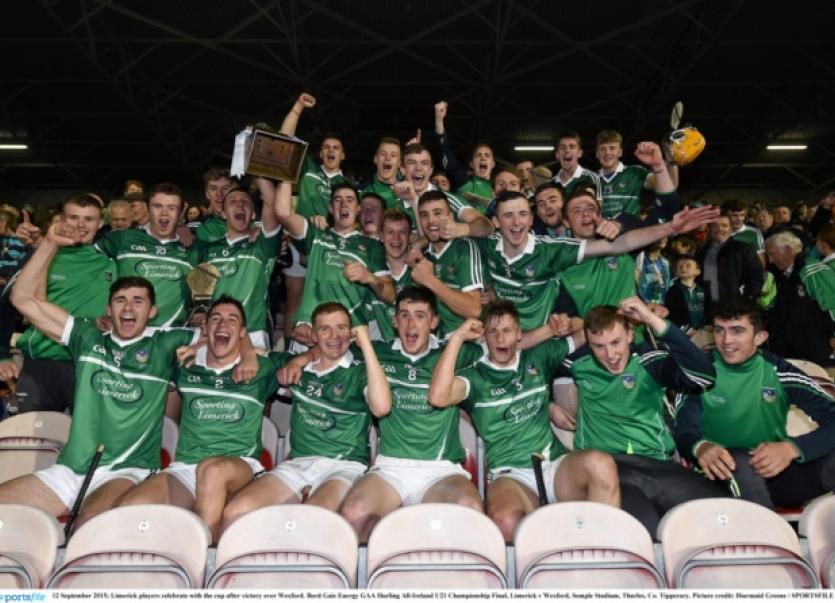 In this week’s Limerick Leader column, Martin Kiely looks back on Limerick’s brilliant All Ireland U-21 final win over Wexford.

In this week’s Limerick Leader column, Martin Kiely looks back on Limerick’s brilliant All Ireland U-21 final win over Wexford.

Incredible joy and emotion greeted the final whistle in Thurles last Saturday evening as the Limerick U-21 team won the All Ireland title for only the fifth time in the county’s history.

I will remember this win for many reasons but most of all for the quality of hurling this young bunch of hurlers produced. This was a complete performance that saw players deliver with heart, passion and hunger. The Limerick supporters backed the team from the very start of this year and they made sure they would be heard before a ball was struck in this encounter. Thirty seconds before throw in they shouted “Limerick Limerick” and it felt like thunder had hit the famous stadium. I can only imagine what it did to the Wexford team.

One of the most pleasing aspects of the team is that they give their all on the field, they are honest and are hurling for each other. The management can take a fair bit of credit for that but they will be the first to admit that the grounding this bunch of players got over the past two/ three years at minor level has stood them well.

John Kiely and his management team did a fine job and what I liked most was the fact that they did it with little fuss. I was never in any doubt that Limerick would win this game because simply they had a better balanced team and lots more quality in the key positions. I have seen all five U-21 titles Limerick have won and for me this is the most complete team we have produced.

Limerick played with great cohesion and understanding and that was so evident in the way they moved the ball with comfort. Starting with eleven of the recent minor teams was a key part in that but overall Wexford could not match Limerick in any area of the pitch. Great teams have good hal-fback lines and the Limerick trio of Byrnes, O’ Connell and Hegarty were truly outstanding. They provided the foundation for victory and cleaned out the various players that came to challenge them. The defence in general was majestic. Goalkeeper Dave McCarthy was also impressive, his puck outs were well placed and he showed vision to find players. I have always had huge time for Richie English and his performance in this game would match anything I have seen before. He was in control, he covered the angles and dominated Wexford’s top player Conor McDonald.

It was a special evening for Gearoid Hegarty who matched what his dad Ger did in 1987 but in his own right Gearoid had a brilliant year. I have said many times before that he was overlooked at minor level but he is developing into a quality player. In the first half alone he handled the ball more than any other player. Barry O’Connell was very solid at six and covered well across the halfback line.

It took a few minutes for the game to open up but once Limerick found the range with superb points from Pat Ryan and Barry Nash they never looked back. Ryan and Nash were in sparkling form, they hit great points with Nash in particular showing signs of a lad that will mix it a higher level. They were well supported by Tom Morrissey who worked hard and landed some fine scores. Referee Johnny Ryan made what most people viewed as a strange decision when not allowing a Limerick goal scored by Ronan Lynch. Had that been allowed the game would have well and truly been over after 20 minutes.

A few minutes later Ryan did the same thing to Wexford and they needed that goal to give life to whatever chance they had. Limerick led by seven points at half-time and a measure of their control saw Wexford only score one point from play in that opening half.

Power play and intensity from Limerick saw Wexford struggle in every position. Cian Lynch looked like he had a Honda 50 as he raced up and down the field. He weaved in and out with balance and his distribution of the ball set up so many Limerick attacks. Long before the finish the game was over. Limerick were now expressing themselves. Diarmaid Byrnes was moving forward more while David Dempsey showed some great touches and delivered a high work rate in the second half. Limerick were moving the ball in waves and try as Wexford did they would have needed a JCB to stop the flowing attacks from Limerick.

It was impressive to see Limerick play so well. This is a very intelligent bunch of players who make good decisions on the ball. The hit and god direct it days are over in hurling and the modern game now requires players to have vision, skill and intelligence and in that regard this Limerick team produced lots of it in Thurles. Wexford were hit by a Limerick hurricane and I don’t think the margin is that big between the teams.

This was an evening when everything went right for Limerick. The subs that came on made a contribution and it’s a while since brothers won All Ireland medals in Limerick on the same day. Michael and Peter Casey will remember this win. Michael has worked very hard at his game over the past couple of years and I was delighted to see such work rewarded. Peter still has three more years at U-21 and to me has the finest hands in the game. Many people were very surprised that Kevin O’Brien of Patrickswell did not make the 24-man panel for this game. He has served Limerick well for three years at U-21 and also won a Fitzgibbon Cup medal with UL this year. The promotion of some players in the week of the match was the only low point in what was otherwise a superb occasion for Limerick. I mentioned last week how a win in this final would be the start of a new era for Limerick.

The players, management and all concerned have played a key part in laying a new foundation of hope for Limerick hurling.