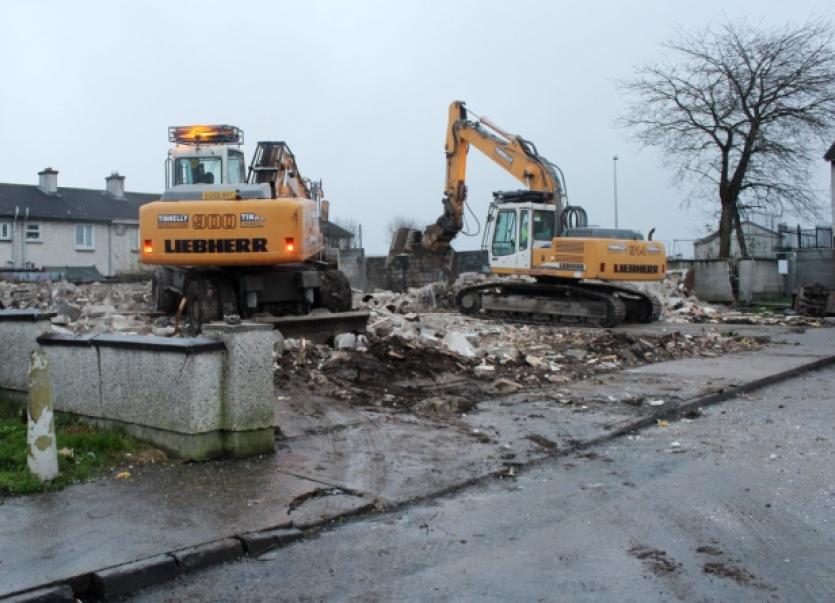 THE DEMOLITION of houses in Moyross under the Regeneration plan is a “foolish policy”, said the parish priest who is calling for a moratorium on demolitions while there is a huge housing crisis in the country.

THE DEMOLITION of houses in Moyross under the Regeneration plan is a “foolish policy”, said the parish priest who is calling for a moratorium on demolitions while there is a huge housing crisis in the country.

A dozen homes in Pineview Gardens in Moyross have been earmarked for demolition, five of which have been demolished this week. No further demolitions will take place in this area until 2015.

Fr Tony O’Riordan, the parish priest in Moyross, had appealed to Environment Minister Alan Kelly to stop the demolition, which started again this Tuesday, claiming that few new homes have been built to replace the 400 plus houses previously demolished. “It is not a people centred policy or a community centred policy, it is a foolish policy. I want a moratorium on demolition, until there is a review of the houses earmarked for demolition, and a cost benefit analysis undertaken to examine what it would cost to bring them back into use.

“Over 1,000 houses have been knocked in Limerick under the Regeneration programme, and there is no indication of when these houses are going to be replaced. Now is not the time to be demolishing these houses when we have a huge housing crisis nationally and locally,” he told the Limerick Leader.

He said that it is “ridiculous” that people were being put out of their homes to live in emergency housing in other parts of the city.

He said Moyross has suffered massively as a result of the exodus of 1,000 people from the community, under the relocation programme, which continues to have a huge knock-on effect on all aspects of social and commercial life.

“Moyross has lost over a third of its population and it’s a tribute to the strength of Moyross that it has held it together, All the amenities are feeling the pinch.

Fianna Fail deputy Willie O’Dea voiced his agreement with Fr O’Riordan’s sentiments and said what was happening in the estate was “disgraceful”. “I agree with Fr O’Riordan that the houses in question should be refurbished to help address the housing shortage, as hundreds of houses have been demolished in Moyross as part of the regeneration programme, but only a few have been built there.

“There is a similar problem in Markievicz Drive, Kincora Park, where residents are completely opposed to a proposal to demolish eight houses in their estate.

“Many of the residents of Moyross feel that the Council are not listening to their concerns and are hell bent on wrecking their community by demolishing the houses, despite the massive housing waiting list which includes some of their own family members.

“Through the demolition programme, the Council have damaged the community spirit in Moyross and other Regeneration areas throughout the city as the area becomes depopulated and services suffer.

Deputy O’Dea concluded: “How can we as a society justify the demolition of these houses when there is such a shortage of houses in Limerick. We need to start refurbishing and building houses and stop knocking them.”

A spokesperson for Regeneration said the construction of 384 units across all regeneration areas have received preliminary departmental approval and are at Design/Part 8 planning stage.

In addition, a total of 140 units have been either constructed or upgraded within the regeneration areas of Limerick to date in 2014.

“There are a number of strategic demolitions planned due to strategic planning reasons. These can generally be characterised as being necessary due to improvements to and reshaping of the physical environment.

“There has been strong involvement and engagement from residents to work in an integrated way towards the creation of vibrant & sustainable communities since the establishment of the regeneration programme,” the spokesperson concluded.