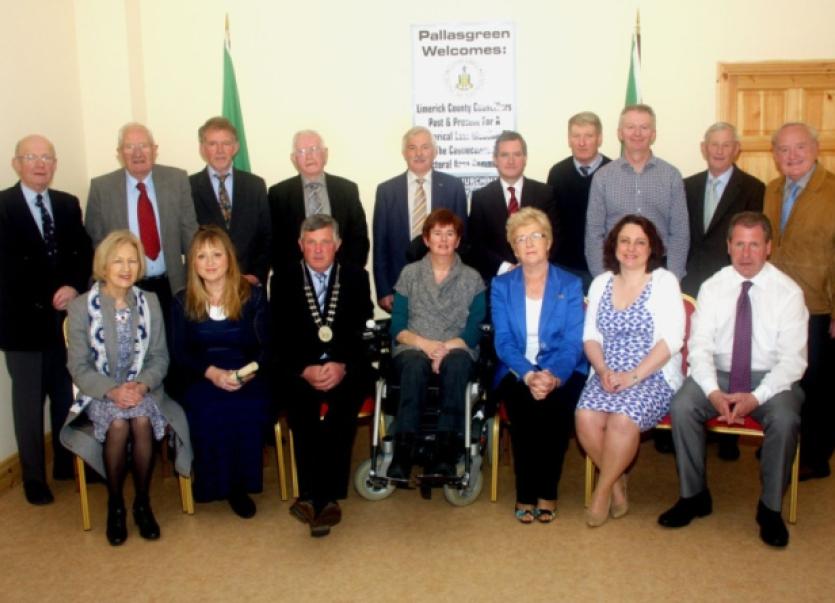 AT 11.37am on Monday morning in Nicker, Cllr Michael Sheahan formally brought the last ever Castleconnell local electoral area meeting to a close.

AT 11.37am on Monday morning in Nicker, Cllr Michael Sheahan formally brought the last ever Castleconnell local electoral area meeting to a close.

It is being divided into Limerick City East and Cappamore Kilmallock.

“It is a sad and historic occasion,” said Cllr Sheahan, chairman.

The writing was literally on the wall as a sign read: “Pallasgreen welcomes Limerick county councillors past and present for a historical last meeting of the Castleconnell electoral area committee in Nicker church hall.”

The event was held in Nicker to honour Cllr Mary Harty for all she has done for her locality and the wider area during her time as a councillor.

Mary was accompanied by her brother Eamonn who was praised by all the councillors for the success of Passion 2014 which took place around the hall.

Cllr Eddie Wade, who is not running on May 23, said he has experienced a lot of cathaoirligh since he was first elected in 1979.

“That is five decades and in that time Mary Harty was one of the most outstanding cathaoirligh. She was always very fair and honourable and I wish you well,” said Cllr Wade.

Cllr Mary Jackman, who is also stepping down, said she had never met someone as organised and committed as Mary Harty.

“You have been part and parcel of the social fabric of Nicker for many years and accomplished so much,” said Cllr Jackman.

The third lady in the seven councillors, Cllr Brigid Teefy wished the two Marys well and said they both had been fantastic cathaoirligh, great advocates for their communities and wonderful colleagues.

On behalf of Cllr Harty, Eamonn welcomed all the councillors to Nicker and thanked them for their kind words.

Cllrs Wade and Jackman go back a long way. He was elected in 1979 while she in 85. They have been jousting across the council table ever since. Cllr Wade admitted with a smile that the “odd scud missile” had been thrown during that time. “Incited by you!” said Cllr Jackman

“It was all for the betterment of East Limerick,” said Wade, who added that councillors from every party in the area always worked together for the people.

The councillors who are running – John Egan, Noel Gleeson, Brigid Teefy and Michael Sheahan – wished their colleagues the very best for the future.

Cllr Gleeson thanked all the county council staff – indoor and outdoor – down through the years.

“They have been first class,” said Cllr Gleeson, which was echoed by all the councillors.

“I think the staff should know what’s happening with Annacotty [area office]. We hope it is left intact,” he added.

Cllr Egan said everybody worked as a team for communities.

“When you are going around it is sickening to get some of the abuse you get. Councillors do an amount of work for the people,” said Cllr Egan.

On behalf of the council, senior engineer Finbarr Keyes thanked the councillors.

“The difference is we are paid to do it but the councillors do it mainly on a voluntary basis,” said Mr Keyes.

After Cllr Sheahan brought the meeting to a close presentation bowls were handed to outgoing councillors and scrolls presented to past councillors.

“It is a sad day for the area and county. There is big change coming and I hope it is for the better,” concluded Mr Hourigan.