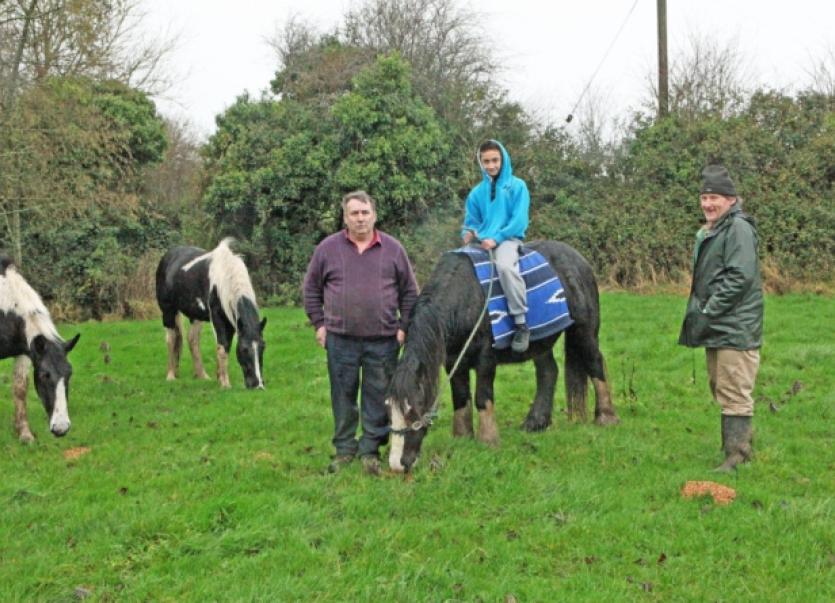 A THIRTEEN-year-old student missed four days of school after her favourite hairy legged horse, Deborah, which is owned by her uncle and aunt, was “wrongly impounded”.

A THIRTEEN-year-old student missed four days of school after her favourite hairy legged horse, Deborah, which is owned by her uncle and aunt, was “wrongly impounded”.

Pat Dalton and his wife Phil have expressed their anger at the local authority after three of their horses were impounded after they went missing from their outside farm at Ballingarry, Garryspillane. Their niece Roisin O’Brien was particularly upset and feared the horses would be put down. The couple claim that the horses were not on the public road when they were impounded.

“Roisin was out of school for four days because she was so upset. She was hysterical,” Phil told the Limerick Leader.

“There are so many acts there that it is difficult to understand them but they [Limerick City and County Council] should know them because they don’t know what hurt they are causing to people out there. There are children involved with horses and ponies – it’s a sensitive area. They need to know before they act in a nilly-willy way - that’s the way it seemed to us. They shouldn’t act on these cases unless they know or have some contact from the owners.”

According to Pat, he fed the horses on Saturday, November 21 at 11am at the outside farm which is six miles from where he lives.

He went to Kerry for a few days and returned the following Monday at 11pm. “There were two black and white horses and the older one was a hairy legged horse – that was Roisin’s pet. They were roughly about €1,600 for the three of them,” he explained.

He said he got a phonecall from his neighbour on Tuesday at 10am asking him if he was missing horses.

Pat checked the farm at around 11am and noticed the gate was open and that the horses were missing.

Pat was informed that the horses were in a pen in Garryspillane.

Pat says he went down to the pen on Tuesday morning and the horses were gone from the pen.

He contacted the man who was using the land and asked him if he knew anything about the horses. “He said the horses were out on the road at 12 on Sunday and he said ‘I put them in the pen’.”

According to Pat, the man informed him that he gave the horses water at 5.30pm on Monday evening. When Pat learned that the horses were gone from the pen he reported it to the gardai in Bruff. “At that stage I thought someone had taken them from the pen – not the county council or the pound,” he said. “On Wednesday morning I got a letter from the council saying the horses were seized.”

He said he spoke to a council representative who told him the horses would not be released until forms were filled out and there was €2,200 paid. “She would not listen to what I had to say,” he said, adding that he again contacted a member of the gardai who was “in charge of this so-called seizure”.

Pat said he wanted to know the time the gardai got a report and what time the horses were seized.

After contacting the gardai and local authority on a number of occasions Pat says he went to his solicitor on Monday of last week. His solicitor rang the pound in Cork and wanted to send a message via fax not to put down the horses. He was informed that they don’t give out their fax number but would deliver the message.

He said his solicitor attempted to find out what time the horses were on the road and were reported to gardai, what time they were picked up, and what road they were on. “I gave a whole week between guards, over back and to Bruff and the whole lot.”

Pat says his solicitor got back a fax from the council stating that the horses would be kept for 24 horses once the money, €2,200, was paid. “He said they got a phonecall that the horses were on the road at 6pm on Monday and were removed between 9pm and 9.30pm by the pound in Cork,” said Pat.

“The solicitor faxed back that he had solid proof the horses were not on the road anytime on Monday or on Monday evening. He faxed her back the letter on Tuesday morning that we had four independent witnesses that the horses were not on the road on Monday evening.” Pat said that his solicitor eventually received an email from the council saying that the horses would be released without payment of fees and the horses had to be removed by 12 from the pound. “We went down Wednesday morning. I paid a fella to go down and get the horses and I went with him. They were wrongly impounded.” When contacted, the local authority said they do not comment on individual cases.