Calls for a flyover to ‘assist’ Limerick’s squirrels 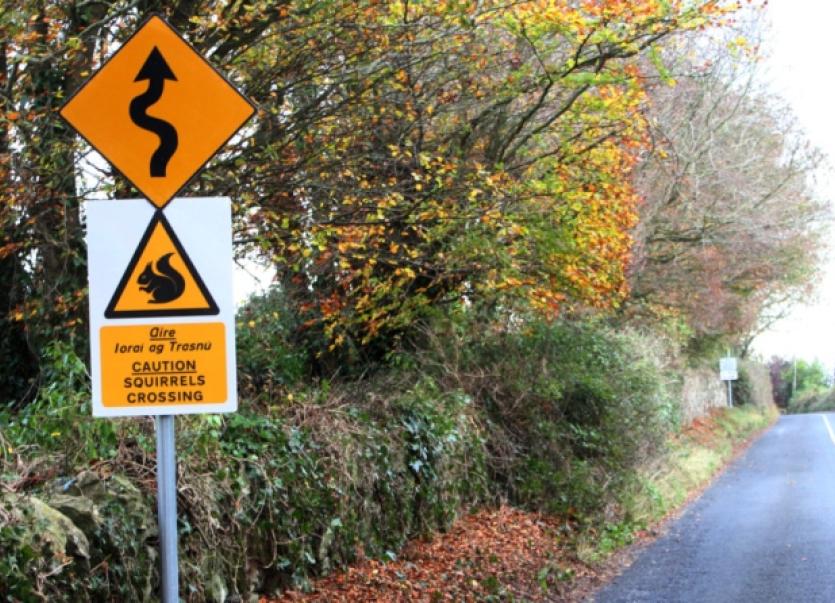 Some might say it’s a bit “nuts”, but a leading wildlife expert has called for a flyover to assist the squirrels of County Limerick.

Some might say it’s a bit “nuts”, but a leading wildlife expert has called for a flyover to assist the squirrels of County Limerick.

The suggestion follows the erection of signs at Friarstown, Ballysheedy – the first of their kind in Limerick – telling motorists ‘Caution, squirrels crossing’.

The National Parks and Wildlife Service (NPWS) recently informed Limerick City and County Council that a number of red squirrels had been knocked down in the area.

As a result, the council approved the erection of temporary signs on the Fedamore road – not far from Limerick Golf Club – alerting motorists to the danger of red squirrels on the road. “Permanent signs have been ordered and are scheduled to be erected by the council. A local landowner had expressed concern about the fate of the squirrels as well and we hope that signage will cause motorists to slow down and take them into account as other road users,” explained Tom O’Neill, Heritage Officer, Limerick City and County Council.

Red squirrels are one of Ireland’s most iconic, native mammals, but sadly they are under severe threat, as increasing numbers of invasive grey squirrels compete for habitat and food, and transmit a deadly disease.

But many red squirrels are also killed by motorists, as they are now confined to small isolated patches of woodland.

“I’d say they are the first signs of their kind in the country,” commented the Leader’s wildlife expert Albert Nolan.

“It is a woodland area and the only way for the squirrels to cross is to come down and cross the road. When there are trees along the side of the road, the cones fall onto the road and they gather there and when a squirrel is feeding on them a car comes along,” he explained of the situation in Ballysheedy.

While supporting the idea of road signage, Mr Nolan said there may be further scope to construct something overhead to assist the squirrels on their journey.

“On the motorways you have deer passes underground and badger passes so why not an overhead for squirrels - a flyover for squirrels - something that connects the trees high enough above the trucks,” he said. Anything that reduces the decline of the red squirrel - which is in danger - he said should be supported.

“It’s range has declined massively over the last 100 years but the good news is you have a creature called the pine marten and there is evidence that the native pine marten is preying on the grey squirrel so what is happening is that nature is reaching its own balance.”

“It’s wonderful to see people being so vigilant and concerned about our beautiful wildlife,” said Celia.