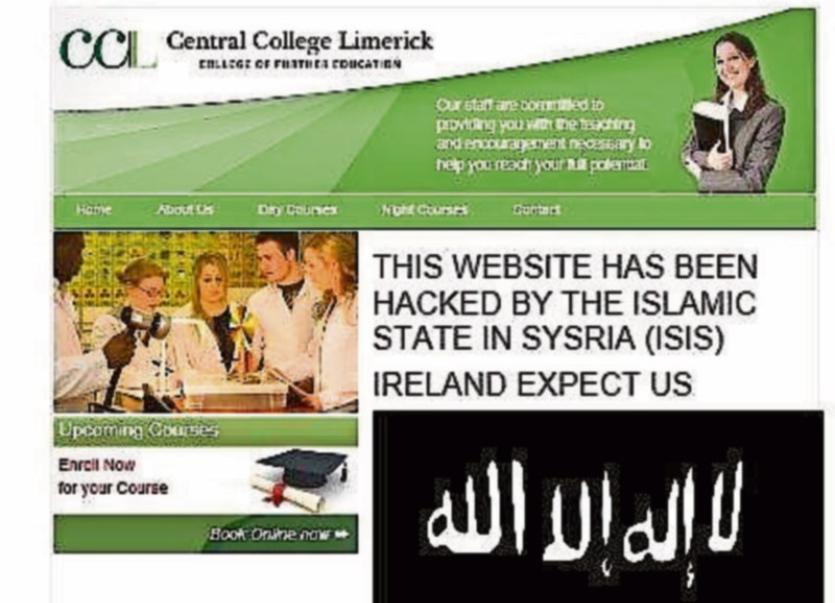 A CYBER security analyst says last month’s hacking of Central College Limerick’s website was probably carried out by Isis or its supporters.

A message reading “This website has been hacked by the Islamic State in Syria (ISIS) ... Ireland expect us” appeared on the home page of the website after it was hacked on October 8.

A photograph of a terrorist holding the Isis flag was also posted by the hackers.

The website was taken down a number of hours after the site was hacked and management at the college said they were “surprised and shocked” at the targeting of the website.

While initial investigations suggested the site was hacked through a server in Ireland, one cyber security analyst it is highly likely it was carried out at the behest of by Isis.

Tom O’Connor, who works with Dublin based Lan.ie says such cyber attacks are a popular strategy.

“It is very likely it could have been somebody sitting in Syria and literally what they are doing is they are hacking hundreds of websites at a time and just spreading their propaganda and that’s their part of the call of faith, or whatever they are supporting, and it is quite common in Ireland now to see this sort of thing on websites,” he said.

Mr O’Connor says more than 100 sites across Ireland have been hacked over the past month and that almost two thirds involved the posting of radical Islamic content. “By the looks of it, it was not young fellas acting up, it looks very similar to a mass defacement which hit quite a number of websites across Europe,” he told Live 95FM’s Limerick Today programme.

He added that no sensitive data was posted on the Central College website and that the hackers sole aim was to spread propaganda.

“For these guys, they see it as a cyber war that is spreading their message as much as possible and basically getting their message out there, this is their part in the war on the West - they are going out and hacking all these websites and defacing them,” Mr O'Connor said.