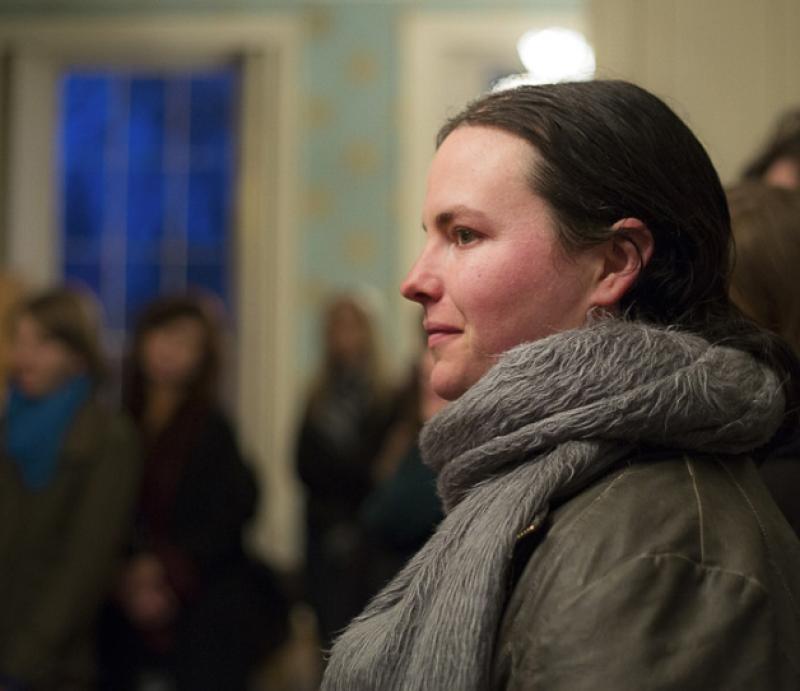 A native of Castleconnell, I went to primary school in the Limerick School Project when it was located on Cecil Street.

A native of Castleconnell, I went to primary school in the Limerick School Project when it was located on Cecil Street.

Later, I attended St. Mary’s secondary school in Newport Co. Tipperary, returning to education, once again, as a mature student, at the Limerick College of Further Education. Originally, I decided at the age of 18, that when I was 23, I would go to college. I spent a year or so, thinking long and hard about what course to do, and about what to do with the rest of my life. In the end, I decided to do a BA in Printmaking and Contemporary Practice, at Limerick School of Art and Design (LSAD), specialising today in 2D drawing, printmaking, photography, bookbinding and sculptural forms.

There was always an element of art at home.

My mother’s side of the family are quite artistic; however, I am not sure about what influenced me. I enjoyed kids’ art classes growing-up and was always encouraged to draw. My mother had some art books, that I really liked to look at, but, what really inspired me to draw, from a very young age, was an insatiable desire to own a horse. Unfortunately, my family couldn’t afford one, so I drew them obsessively instead. This continued well into my teens.

Despite being a practitioner of drawing and painting I never really knew what I wanted to be when I grew up.

At one point, I wanted to be a vet, then an architect and for a long time wanted to work with horses. I, even, worked as an archaeologist for five years in Dublin doing site surveys and archaeological finds illustration. When the building industry crashed, in 2007, I gave up that line of work and returned home. It was, also, around that time that my father was diagnosed with the degenerative brain condition, known as Multiple System Atrophy (MSA), which has similar symptoms to Parkinson’s disease. As a result, I stayed around Limerick to help look after him until the end came.

Recently, I purchased a digitised copy of a UK ‘cold case’ archive, (1943), in which an unidentified female skeleton was found inside a tree.

It is likely to be something which will occupy me for some time to come. Even to this day no one is quite sure whether the cause of her death was Witchcraft or something to do with spying in WWII. I am, also, working on a series of books with Pamela Dunne and Marian Sheehan, inspired by the ‘From Print to Postcard – Limerick’s Ghost Stories’ project that Pamela and I worked on, as part of the Park Kiosk Exhibition, last February. Clearly, I prefer not to be pinned down into focusing on just one idea.

Currently, Occupy Space does not have a permanent gallery space to work from, and additionally, we have just lost our office in The Granary.

Ironically, the economic recovery has made it more difficult to access space. Whether a recovery has really happened, or not, is debatable, but certainly it would seem that people are reluctant to rent spaces short term, at low rates, as they are increasingly holding out for something better. We have one ‘group show’ coming-up this summer, and after that, we plan to begin negotiations for a multi-venue event, possibly as far ahead as 2017. In this, we have been greatly inspired by contributors to the recent Visual Art Ecology Conference, in Limerick. As a result, we now feel that it would make more sense to run bigger less frequent events, than to follow the old model of consecutive once-off shows. This should assist us greatly in maintaining our own artistic practices, as well as ensuring the continuing viability of Occupy Space.

As an artist you have to work really hard for every opportunity and to be able to recognise one when it finally comes along.

You tend to spend an inordinate amount of your time filling in applications and worrying about how to tailor your various blurbs for this or that. A friend of mine, once said, that it seemed to her, that many professional artists, who do manage to make a career out of it, seem to achieve this more by sheer persistence, than through talent, as such. You have to hope for the benevolence or enthusiasm of curators, gallery programmers and grant awarding bodies. Selling work is, also, a tricky business. I hope to have enough coherent material for a solo show myself next year, and eventually, I would like to do an MA. Ultimately, I will probably move to the UK or Europe. Having a concurrent career is, also, a ‘must’ no matter how far along the artist ladder you might be. I currently work as a part-time studio technician, at Limerick Printmakers, work on and off as a gallery technician, have a variety of roles in the film industry, am a sales assistant at craft fairs, and a graphic designer, plus a few other jobs, all to fund my art practice.

All humans have innate creativity.

However, how they, realise, accept or express it, differs. Personally, I am continually inspired by the world around me and have a desire to experiment with different materials and ways of making. Sometimes, I have a tendency to get lost in the process.

The particularly hard bit for me is finding the right concept to work from. If I could live many more lifetimes I would probably learn everything there is to know. It is a pity that life is so short!