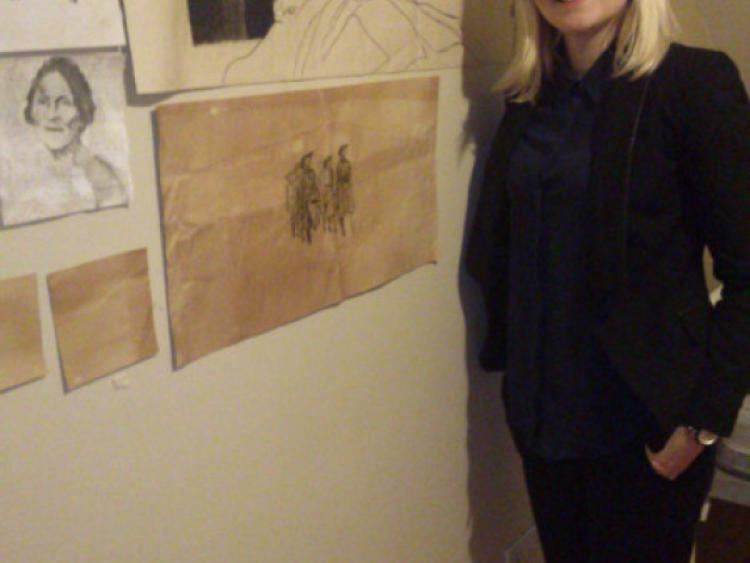 Born, and reared in Limerick city I am currently living in the county.

Born, and reared in Limerick city I am currently living in the county.

I was educated in the city and went on to study Fine Art Painting at Limerick School of Art and Design (LSAD) before completing an MA in the History of Art and Architecture at the University of Limerick (UL). Throughout my childhood I was always encouraged artistically and developed a great love of art which has obviously stayed with me. Today, if I was not someway involved in the arts, a career in politics would appeal to me or else a job that pays me to travel.

It consists of a series of drawings sketched from contemporary photos of the activities and personalities involved in the fight for Irish Independence. It will, also, include a series of text art which conveys contemporary attitudes towards these revolutionaries. Such views culminated in new legislation and a rewritten constitution which fundamentally shaped Irish society and Irish law. In this way, the women of Ireland were denied their basic right to equal citizenship despite the crucial role that they played in bringing about independence.

One of the core elements of my art is the use of the mundane, to explore a central theme or concern.

In the past, I have used household and domestic substances such as detergents and foodstuffs, along with sponges, curtains and bed sheets. While my focus when studying was mainly on painting, the last couple of years have seen my gaze shift to drawing. In the case of my current exhibition household materials are used as a means of delving into the ideas and expectations that women were subject to in the private, domestic sphere. However, these same women were later to successfully breach the masculine and public, political sphere. One of the chief concerns of this exhibition is the fact that a whole demographic of Irish revolutionaries were written out of the history books. Perhaps, through denying women their proper place in Irish history, it was easier to go on and deny them the very freedoms that they had toiled for-freedoms which their fellow countrymen subsequently went on to enjoy.

If an individual has a serious desire to pursue art

I would absolutely encourage them to do so. However, this advice would come with the proviso that it is not an occupation that is likely to make you rich. So unfortunately, as it stands, it is a career that should be pursued purely for the love of it (anything else that comes along after that must be a bonus). It is always challenging to be an artist, but of course, it is particularly so, in the current economic climate. Artists are always in a financially precarious situation but the relentless cuts to funding in the last few years have had a detrimental effect on artists and art institutions.

Inspiration for my work generally comes from subjects that I am interested in.

For example, social justice and psychology, and artists who explore these issues. Aesthetically speaking, I find inspiration from artists who are experimental with materials and colour. I am particularly drawn to the idea of using, and recycling, banal and base materials that traditionally were not associated with Fine Art. As a result, I admire artists such as Frida Kahlo, Beatriz Milhazes and Alice Maher. Every artist has their own individual reasons for pursuing a career in the arts. For me, it provides a mode of expression and one where it is possible to be quite free in that expression. I personally like art that challenges or inspires the viewer to think about an issue whether that be a social or an aesthetic concern.

At the moment, Limerick is a great place to be an artist.

We are very lucky to boast Limerick City Gallery of Art (LCGA) and the Hunt Museum as two of the more permanent exhibition spaces in the city. Limerick is, also, very well served by the independently run contemporary art space, Ormston House, which consistently brings engaging contemporary art to the city including the work of artist Richard Mosse. Importantly, a number of other galleries, such as Friars’ Gate Theatre, serve the people of Co. Limerick by bringing quality art and theatre to rural Ireland.

LSAD is renowned for its high educational standards and the excellent support it provides to budding artists.

Initiatives such as Creative Limerick have great potential to support the city’s artistic community, and of course, City of Culture 2014, has succeeded in raising the cultural profile of Limerick. Hopefully, the support that has been there for cultural practitioners will not wane now that our City of Culture has drawn to an end.

For 2015, I have taken a resolution to continue to develop my current art practice and to exhibit at various venues.

I certainly plan to stay in Limerick for the foreseeable future. However, if an opportunity presented itself, elsewhere, I would consider a move. Overall, my main ambition for the future is to carve out a successful career for myself in the arts. It is important for all artistic/cultural practitioners and their supporters in Limerick to come together so as to ensure continued engagement with the people of our fine city!

Aislinn O’Keeffe’s exhibition ‘As if she had a right to be there’ runs from February 6 to 28 at the Friars’ Gate Theatre, in Kilmallock with a preview and opening on Thursday, February 5 at 7.30pm. For more information please visit the websites: www.friarsgate.ie and www.callbacktheatre.com Aislinn O’Keeffe’s visual artist page is at: www.facebook.com/aislinnokeeffevisualartist