Don’t Mind Me: Spread the news, butter is back on the table 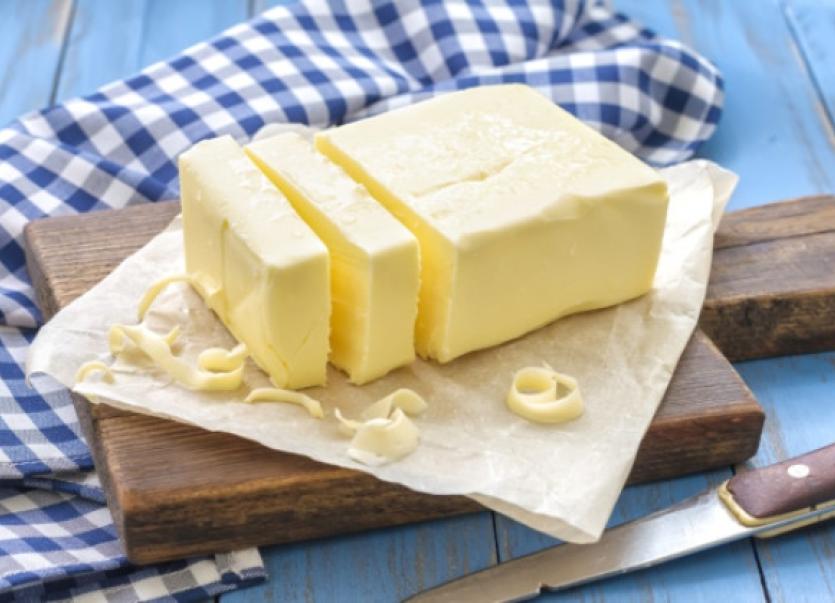 SOMETIMES, to look at me, you’d think butter wouldn’t melt in my mouth. Right? Despite that, the sight of a single swirl of butter posing daintily on the front page of ‘Time’ magazine last week, accompanied by the news that it is now accepted as a healthy food and no threat whatsoever to the heart, brought a broad smile to my face. It was like meeting an old friend again.

SOMETIMES, to look at me, you’d think butter wouldn’t melt in my mouth. Right? Despite that, the sight of a single swirl of butter posing daintily on the front page of ‘Time’ magazine last week, accompanied by the news that it is now accepted as a healthy food and no threat whatsoever to the heart, brought a broad smile to my face. It was like meeting an old friend again.

Limerick’s dairy farmers were no doubt smiling too and the National Dairy Council must have been cock-a-hoop altogether, although strangely they’re not showing it. You’d think they’d be making the most of a good news story, wouldn’t you? In fairness to the farmers, they never lost faith in butter, even when the old EEC was stockpiling it in mountains and the health fanatics of the world were denouncing it from the high altar of dietary correctness.

I hope this doesn’t sound as if I’ve buttering them up, but if the farmers have any sense, they’ll take butter making into their own hands again now that the product’s good name has been restored globally. They’ll invest in churns and firkins straight away and start making their own butter as their forbears did, and never again allow those big corporations to give butter a bad name. They shouldn’t waste any time, because I have a funny feeling that people will be dumping their goji berries and fat free spreads after this, and butter will become the new health food. We never do things by half!

Maybe I’m getting carried away, but I can even see a future for Irish bog butter in the international gourmet trade. Sacred cow, the possibilities are limitless. We used to think that our ancestors buried butter in firkins in bogs to preserve it or protect it from marauding strangers. Now it is becoming generally accepted that the butter was buried to enhance its flavour. The longer it remained in the bog the more delicious it tasted by all accounts. Burying it in an EU butter mountain only makes it rancid.

However, the sudden redemption of full fat butter as a healthy option and the announcement that its supposed adverse health implications were based on false data over a period of more than 40 years is, to say the least, very annoying for some of us. I’m thinking of all the missed opportunities I had in life to indulge my fondness for the luscious product, instead of having to opt for low fat, polyunsaturated concoctions whose molecules were changed so drastically that I sometimes thought I was spreading plasticine on my toast. I feel terribly short-changed, because not only did I have to make an unnecessary sacrifice in the mistaken belief that I was guarding against the threat of cardiovascular disease, but now I’m told that the opposite was the case. I could have avoided the clogged arteries if I had eaten more butter, and dumped the low fat. On top of that I’m now fretting over what all those rogue molecules in the processed fake products may have done to my system.

Pass the butter, please, before I scream! If I’m honest, however, I’ll have to admit that it wasn’t the alleged health implications that first prompted me to watch my intake of butter all those years ago. The notion of clogged arteries wasn’t even an issue with me. When fat-free spreads first appeared on the market, I thought I had found the key to a fat free me. “Yippee,” I said to myself, “I’ll be a size eight in no time. It was logical, really, I argued, and well and good if it kept the cholesterol at bay as well. Every time I ordered a sandwich, I’d add ‘no butter please’, and when the taste buds started acting up, I’d have to draw on deep reserves of will power, which I didn’t even know I had. Sometimes I had to go to the extreme of faking an intolerance to dairy products when someone tried to push butter on me or enquired, in pitying tones, if I was on a diet.

But it was all in vain. The weight wouldn’t budge and if I had any bit of cop-on at all, I’d have realised, long before ‘Time’ magazine, that whatever caused the weight problem in the first place, it wasn’t butter. And whatever was keeping it there wasn’t butter either, because I was no longer using it. Now that’s more  like logic.

As the years went by, I, like most people, succumbed to the advice to go easy on saturated fats and butter was the prime culprit. We all allowed ourselves to be saturated instead with tons of anti butter propaganda. Now we have to face the truth that this advice was based on deeply flawed data and that butter may have been infinitely healthier than the substitute products that were foisted on us by health promoters. Even more dismaying is the prospect that those same health promoters may have been taking their cue from the very food manufacturers who were making millions fiddling with molecules and exploiting our food paranoia.

It’s depressing actually, and I have no idea why the cover of ‘Time’ brought a smile to my face.