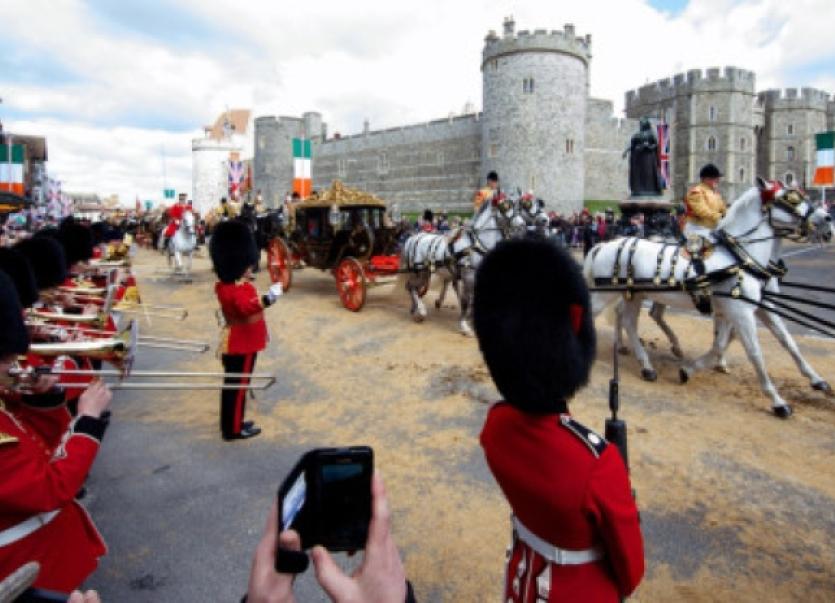 WHAT a right royal time we’re having these days, free at last to indulge our monarchical fantasies. God knows, we’ve been in denial for long enough! President Higgins dines with the Queen at Windsor Castle and we feel as if, at last, we’ve arrived. Meanwhile, back home here in Killaloe, we’re all in magisterial mode in advance of the Battle of Clontarf commemorations.

WHAT a right royal time we’re having these days, free at last to indulge our monarchical fantasies. God knows, we’ve been in denial for long enough! President Higgins dines with the Queen at Windsor Castle and we feel as if, at last, we’ve arrived. Meanwhile, back home here in Killaloe, we’re all in magisterial mode in advance of the Battle of Clontarf commemorations.

Pomp and pride aside, it can’t but be a huge boost to the local economy. The hills are alive with the sound of the Kincora war cry, and the place is traffic choked with Brian Boru worshippers. Every minor king in Munster is coming to pay fealty to ‘the last high king of Ireland’. Apparently, it beats paying property tax and water charges any day.

The global O’Briens are arriving in droves looking suitably seigneurial, and there are Vikings running around the streets dressed in sackcloth, which is a bit disconcerting. What have they to celebrate? Anyway, I’d join in if it wasn’t all so triumphalist, or even if someone could tell me where Brian’s continentally renowned wine cellar was located and I could start digging. It’s reputed to have been in Ballina, across the river from Kincora, but if it is, it must be under tons of concrete by now.

Unfortunately too, some people here are caught up in an eternal Leinster/Munster conflict dilemma. They’re getting their Heineken Cup mixed up with the Battle of Clontarf, and as far as they’re concerned, Ronan O’Gara was the last high king of Ireland. In sixth class primary school history lessons over half a century ago, we learned that Ruairdhi O’Connor, and not Brian Boru, held that particular distinction, but then he never declared himself ‘Emperor of the Irish’ or even scored a try. History is fascinating. You couldn’t make it up!

Anyway, Good Friday is D-Day, and while I’m surprised that a Christian king picked such a holy day for what was arguably the bloodiest battle in the country’s history, he is now, 1,000 years on, going to have to compete for attention with the new Good Friday social phenomenon of big ‘drinking parties’ organised by the young and not so young to celebrate the day up and down the country. Nothing’s changed much as far as respect for religion and tradition is concerned, but at least the Vikings are wearing sack cloth.

The thing is that before Good Friday is out I may well have to flee to the Viking city of Limerick to escape the fanfare and the commemorations. Which begs the question, why isn’t Limerick getting in more aggressively on the action? No city played such a large part in the life of the legendary Brian Boru than did Limerick, and few cities have so many royal connections. Surely it could do right now with an invasion of O’Briens from all over the world. Some of them are loaded!

After all it was Brian Boru who rid Limerick of the Vikings long before he finished the job at Clontarf. The trouble is I don’t know whether he was doing the place a favour or not. He was consolidating his clan’s claim to the kingship of Munster at the time and ended up burning the city to the ground after his first great victory a few miles away at Sulcoit, near Sologheadbeg. Sulcoit, unlike Clontarf, seems to have been wiped from the popular imagination, but the fact remains that after it, Limerick was never the same again.

Clontarf might never have happened if Brian had been defeated at Sulcoit and stopped in his land grabbing tracks, and heaven knows what kind of country might have evolved. My own ancestors – the Eoghnacht dynasty - might have retained the kingship of Munster and I might have been dining with the Queen myself in Windsor Castle. I’m telling you, even I have notions of grandeur. I have a minor king somewhere in my genes. But then, don’t we all?

Which brings me nicely to the subject of the presidential visit to Britain and the irksome hype that surrounded the whole event. But the bottom line is this. Despite the hype, we were all chuffed.

And there I was, just a couple of years ago - when the country appeared to be sinking under the weight of public extravagance - calling for the abolition of the meaningless Presidency and the closure of the Arus. Well, I’ve changed my mind. No-one was more delighted than I was last week with the visit. The ceremonial alone struck a chord somewhere in my race memory, or was it in my delusions? The only discordant note was the blatantly commercial attempt to boost the Irish fashion industry with an undue emphasis on Sabina’s style. Granuaile wouldn’t have approved.

Nonetheless, the pageantry was delightful. We should hang on to the Arus and the Presidency, but maybe Michael Noonan should dump the 1947 Rolls Royce – the Presidential state car - and make provision instead in the next Budget for a team of plumed white horses and a couple of dozen footmen.

Brian Boru aside, all I’m saying is that we still appear to be more at home at court than we’ve ever been in a republic.