Limerick town flies the American flag in memory of JFK 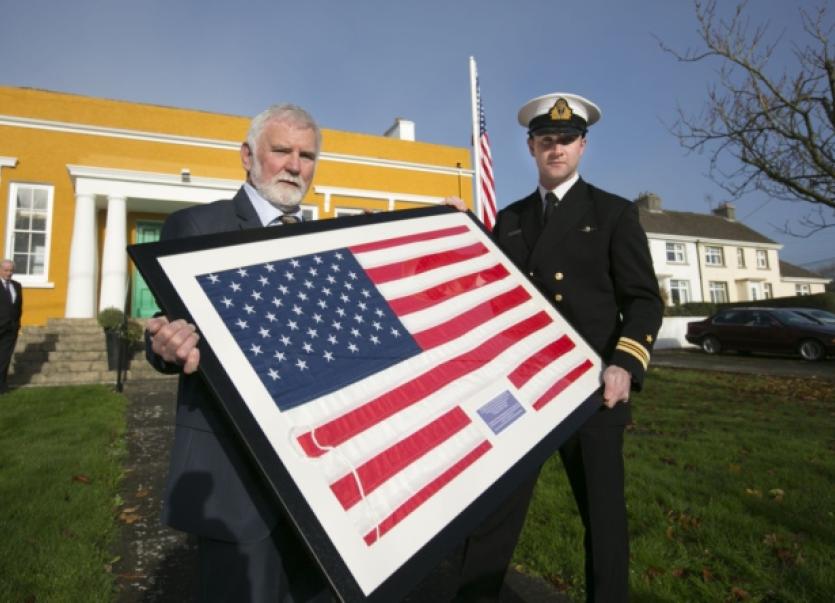 THE AMERICAN flag which flew on the Irish Navy vessel, the LE Orla, as it sailed into New Ross on June 22 last carrying the eternal flame from the grave of JFK in Arlington Cemetery, was presented to Bruff Heritage Group on the 50th anniversary of the president’s death.

THE AMERICAN flag which flew on the Irish Navy vessel, the LE Orla, as it sailed into New Ross on June 22 last carrying the eternal flame from the grave of JFK in Arlington Cemetery, was presented to Bruff Heritage Group on the 50th anniversary of the president’s death.

The people of Bruff marked the milestone anniversary of the late President Kennedy’s passing, last Friday by holding a special Mass in Ss Peter and Paul’s church in the town which was attended by over 100 people.

The Mass which was organised by Bruff Heritage Group was celebrated by the Bishop of Limerick, Dr Brendan Leahy, who was assisted by Canon James Costello, PP, Bruff, and by Canon Willie Fitzmaurice from Kilmallock.

“Fifty years ago this very day, the world was stunned at the news of the assassination of John Fitzgerald Kennedy. For Irish people, it was particularly shocking as he had toured this land just five months previously, a visit he described as the best four days of his life,” Bishop Leahy told the congregation.

“As we set the compass again today in our own lives, it is a time for us to remind ourselves that each of us has only one life and that it is important to live it well. We don’t know the day nor the hour of our death, when our encounter with Jesus will take place,” he added.

Members from the three choirs in the parish, Meanus, Grange and Bruff joined together to mark the occasion. The various clubs and organisations in the parish were represented in the readings and prayers and to mark the connection between the Fitzgerald/Kennedys and Bruff and the Lough Gur area.

During the reception, the chairman of Limerick County Council, Cllr John Sheahan, paid tribute to the members of Bruff Heritage Group for the work they had done in organising the visit of Caroline Kennedy and for the work they were doing in relation to the Thomas Fitzgerald Centre. He then announced that Limerick County Council had decided that the Thomas Fitzgerald Centre in Bruff is to become the permanent home for a collection of photographs and memorabilia associated with the visit of President Kennedy to Limerick in 1963.

The chairman then presented part of the collection to the members of Bruff Heritage Group.

In response, the chairman of Bruff Heritage Group, Paul Dennehy, thanked the County Council for what he described “a significant contribution” to the Thomas Fitzgerald Centre. He spoke of how the legacy of President Kennedy’s visit had a very positive benefit for the New Ross area in the last 50 years and how he hoped that the Thomas Fitzgerald Centre would now become the type of centre where people and visitors to the area could come to see and appreciate the strong connection between Bruff and President Kennedy.

On behalf of the Irish Navy, Lieutenant Commander Conor Kirwan made a presentation to Michael Cronin, the secretary of Bruff Heritage Group, of the American flag which flew on the Irish Navy ship, the LE Orla as it sailed into New Ross on June 22 last carrying the eternal flame from the grave of President Kennedy in Arlington Cemetery.

It is unusual for a Irish Navy ship to fly the American flag but due to the circumstances of the event last June, it was decided the LE Orla should fly the flag. Since then, the LE Orla has been taken out of commission, so, therefore, the significance of the flag is even greater.