Gardening: ‘Christmas wonder from Down Under’ 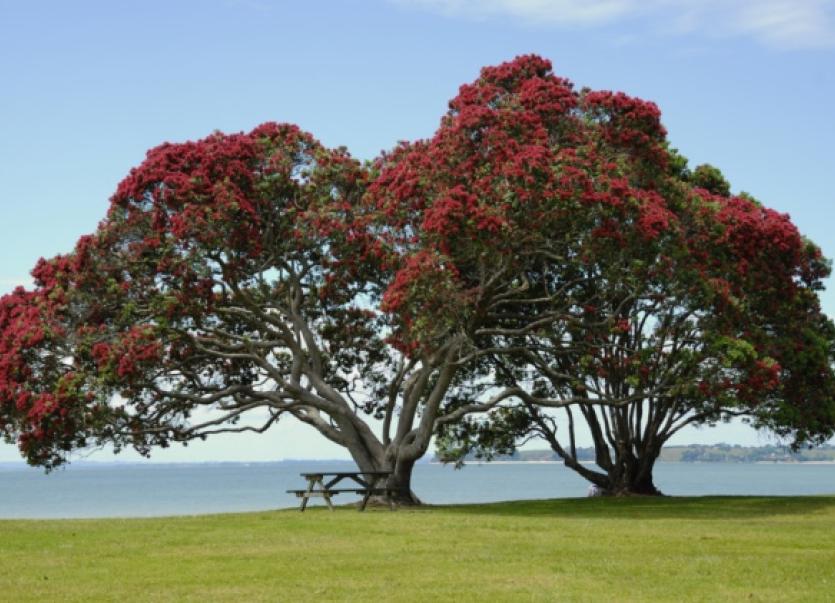 Metrosideros excelsa is a tree in full flower now. The tree comes from the North Island of New Zealand and is commonly called the New Zealand Christmas Tree because it is covered with red flowers at Christmas time in New Zealand.

Metrosideros excelsa is a tree in full flower now. The tree comes from the North Island of New Zealand and is commonly called the New Zealand Christmas Tree because it is covered with red flowers at Christmas time in New Zealand.

Metrosideros comes from the Greek word for ironwood which refers to the hardness of the wood and excelsa is from Latin meaning tall or high. In New Zealand many trees are known by their Maori name, this tree is called Pohutukawa which means ‘drenched with mist’. The tree is a member of the Myrtle family which contains many of Australia’s familiar trees and shrubs like the Eucalyptus, Melaleuca, Leptospermum and Callistemon (Bottlebrush).

In its native habitat this tree can grow to 75 feet tall. In Auckland there is an old tree, planted in 1800, which has a diameter of 12 feet as big as an old oak tree.

Although a large tree normally, Metrosideros responds well to pruning and can be hedged or topiarised. The leaves are dark green on top and silvery white underneath. The flower buds are also a silvery white and look most attractive against the dark green. It produces clusters of crimson flowers at the ends of the branches. The flower consists of a mass of stamens rather than the colourful petals of many flowers. The tips of the stamens are gold in colour, very similar to the bottlebrush flower except this flower is spherical in shape.

Metrodideros is a coastal plant that will not tolerate frost, if you want to grow the plant in a frosty area , you will have to provide the young plant with a warm sheltered place until it is big enough to survive low temperatures.

Grow the plant in humus rich, moist but well drained neutral to acid soil, in full sun. It is best to grow the plant in a greenhouse for a few years before planting out. When the plant becomes mature, the branches develop long pendulous red aerial roots which it often uses to cling to rocky cliffs. In woodlands these trees are referred to as stranglers. Stranglers are trees that germinate on the tops of other trees, produce aerial roots that grow down to the ground where they take root and eventually will strangle the tree they are growing on.

There are many variegated forms of the metrosideros tree, some with creamy-yellow margin to the leaf, others have white patches at the base of the leaf. Metrosideros excelsa is an attractive plant, well worth the extra effort in trying to grow it.

Abutilon is an evergreen or deciduous shrub from the tropical regions of Africa, Australia and America. Abutilons are grown for their showy, mostly bell shaped flowers, with highly colourful stamens, that can flower from spring to autumn. The flowers are solitary and hang like a pendulum along the stem. Some abutilons like ‘Thompsonii’ have attractive variegated foliage. Some abutilons are frost tender and should be grown in a conservatory or greenhouse.

In recent years frost has become less of a problem and these plants are able to survive the winter outdoors. We grow abutilons in the greenhouse and in  border beds.

The flower colours vary from white to yellow to pink to red. Some varieties worth growing are Abutilon ‘Kentish Bells’ which produces apricot petals and purple stamens, Abutilon ‘Thompsonii’ has a variegated big maple-like leaf with salmon-pink flowers, Abutilon ‘Ashford Red’ produces large red flowers, Abutilon megapotamicum has slender arching shoots that produce bell-shaped flowers with yellow petals and purple stamens, from summer to autumn. It is a native of Brazil.