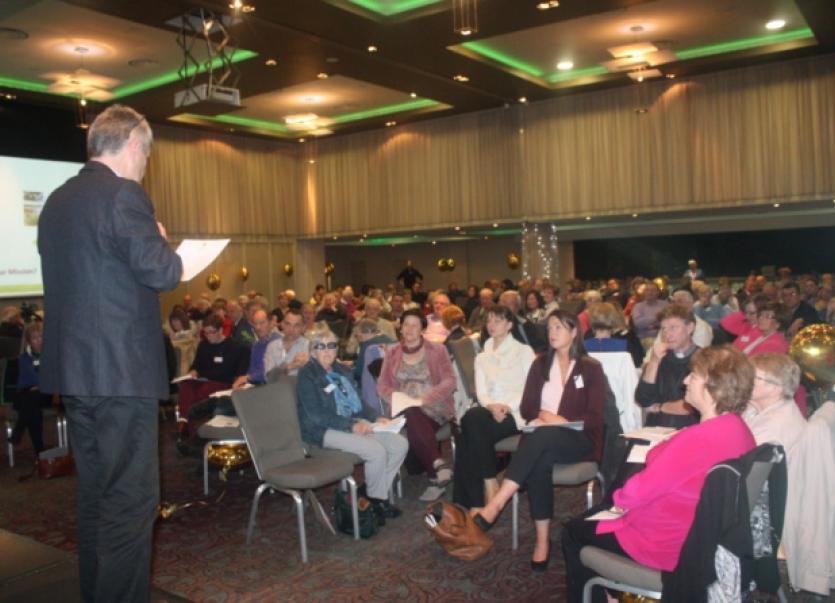 AREAS of concern among some of the 4,000 respondents to a questionnaire informing the first Synod to take place in Limerick for 70 years include gay marriage and equality for gay people, themes which are “very much on the agenda” ahead of the 2016 think tank.

AREAS of concern among some of the 4,000 respondents to a questionnaire informing the first Synod to take place in Limerick for 70 years include gay marriage and equality for gay people, themes which are “very much on the agenda” ahead of the 2016 think tank.

A recent meeting of over 300 delegates drawn from the Limerick Diocese – some 70% of whom are lay people –selected themes ahead of the Synod following a ‘listening process’ that took place during the first half of this year.

The process, which the Diocese said had connected with 5,000 plus people, “drawn from all socio economic backgrounds and ethnicities”, included a questionnaire answered by some 4,000 people.

In all almost 60 parishes engaged with the process, plus 25 other groups, including those in education, healthcare, members of the travelling community, the migrant community and people with disabilities, the Diocese said.

The six themes for the Synod, whittled down from a shortlist of 12, are Community and Sense of Belonging, Faith Formation, Pastoral Care of the Family, New Models of Leadership, Liturgy and Life and Young People.

Under the thematic heading of Pastoral Care of the Family, areas of concern referenced by respondents included the role of parents and guardians in passing on the faith, separation and divorce, second relationships and caring for children, gay marriage and equality for gay people.

Community and Sense of Belonging was the most referenced theme, discussing how to build communities, declining numbers in communities, encouraging volunteerism and generating a caring ethos.

“The listening process we set out on earlier this year has been an extremely positive one,” said Bishop Brendan Leahy. “The clergy know that the Church faces many issues but so does the laity and it wants to play its part in regenerating the Church for the future.”

Director of the Synod, Fr Eamonn Fitzgibbon, said that, because of the decline in vocations, the laity would “play a far greater role” in the Church’s future.

“In the Limerick Diocese, the listening process for the Synod is really the start of this as together we will charter a course for the Church of tomorrow,” he said.