Talks on new Limerick council go down to the wire 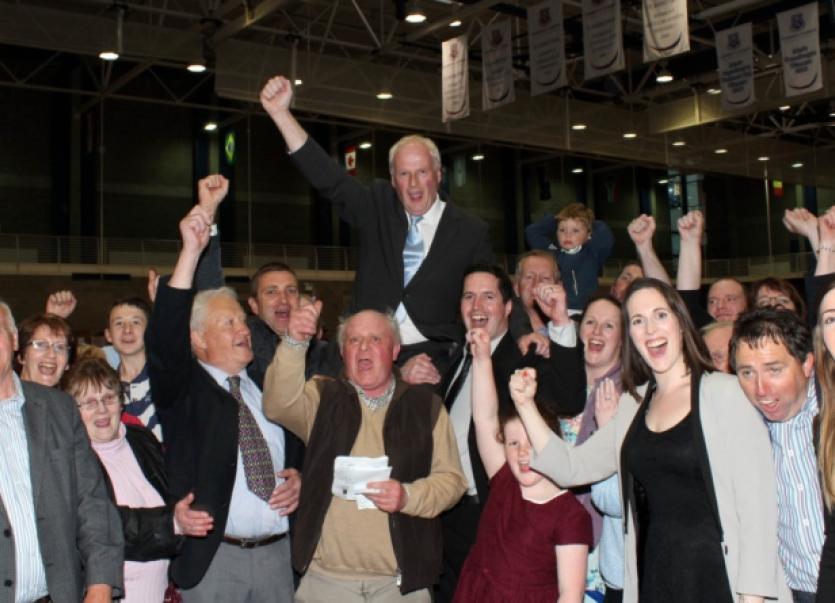 NEGOTIATIONS to reach a power-sharing pact on the new-look Limerick City and County Council look set to go down to the wire.

NEGOTIATIONS to reach a power-sharing pact on the new-look Limerick City and County Council look set to go down to the wire.

With just one day to go before the first meeting of the new council this Friday, Fianna Fail and Fine Gael were heading into their third round of discussions on Wednesday evening. But no firm deal has been sealed as yet.

And any pact could come unstuck on the details, a source close to the negotiations said.

Cllr John Sheahan, party leader of the 12 Fine Gael members of the new council, confirmed his party has been in discussions only with Fianna Fail.

“Discussions are being held,” he said shortly before talks with Fianna Fail resumed at 5pm on Wednesday.

“We are hopeful of reaching some accommodation but we aren’t there yet.”

“You can’t rule anybody in or out,” said Cllr Michael Collins, a member of the four-man Fianna Fail negotiating team.

“You don’t know, at any stage talks could break down.”

“As the largest grouping in the council, we are taking these discussions very seriously. There is a clear responsibility for us to try and negotiate what is best for the city and the county.

“We want to get a deal on the table but we want to make sure everything is fair and above board. Securing positions is not the defining factor for us. It is what is going to be the most stable and the best for city and county.”

Meanwhile, Cllr Maurice Quinlivan, when asked what Sinn Féin would do this Friday, replied: “We are not sure yet. We are in continuous communication with Fianna Fail since the weekend.”

Talks with Fianna Fail were “ongoing at the moment”, he said this Wednesday evening.

“There has been a proper discussion. There are things that need to be clarified on both sides.”

However, he stressed, he was not talking about an “alliance” with Fianna Fail.

“You wouldn’t be talking about an alliance on the budget,” he added.

In the city the battle for power could see Fine Gael claim an unlikely mayoralty, as a result of an electoral pact with Fianna Fail.

The Limerick Leader understands Cllrs Michael Sheahan and Maria Byrne will battle it out for the Fine Gael nomination to take the job of the city’s first citizen ahead of the mayoral election on Monday, June 16.

Meanwhile, Fianna Fail is expected to meet today for a re-run of its internal election for party leader and deputy leader.

Cllr Ryan was seeking to be leader of the overall Fianna Fail bloc, with Cllr O’Hanlon his deputy.

However, following a meeting with the party’s general secretary Sean Dorgan at the South Court Hotel which lasted six hours and 15 minutes on Friday night, peace was restored.

“It will serve as a model for newly elected groups into the future. When you get a family like Fianna Fail - I think we can pass ourselves as a family of free spirits - you have individual opinions and we are all willing to express them.”

After Sean Dorgan met with both sides in different rooms, the Galbally councillor was chosen as spokesperson for the former ‘Independent Fianna Fail’ during the discussions, while councillors Francis Foley, Mike Donegan and Shane Clifford were the spokespersons for the other side.

While Sean Dorgan spoke with the spokespersons from both sides, the remaining nine councillors waited outside in the hotel lobby for word of a breakthrough. It came after six hours and 15 minutes.

When asked if he had any regrets about his actions, Cllr Ryan said: “I have absolutely none”.

Both groups, he said, were “definitely up for talking”.

“And it was the right thing to do. There was no point in letting it go too far beyond Friday. In the early hours of the morning we struck - not a deal but an understanding as to how we would proceed. That was down to mutual respect for each other and a bit of fairness.”

Cllr Ryan said he was absolutely happy to have Sean Dorgan acting as mediator.

“He had been speaking to Michael Martin on more than one occasion and Micheal Martin was, to tell the truth, absolutely livid with the 13 of us, simple as that and I don’t blame him. We had a great election result and we needed to maximise that for the people who elected us and that should have been our priority.

However, differences did occur and as I said this is an insight into politics. Politics is about compromise, negotiating, talking and fairness.

“I think we now have a better group of 13 to serve the people, no question about it. Come next Friday, whatever associations are formed within the new council, we, the Fianna Fail, group - the 13 of us - will be wearing the green jersey and we will be doing it for the entire city and county to serve the people who elected us.”

Resigning from the council group over the leadership role, Cllr Ryan said “was not about serving Eddie Ryan”.

“I felt a rotation of positions would be important. If it doesn’t happen now, I will have made my point and I think we will be in a better place at having done what we did.”

“We were all of a willing spirit to do business - there was no question about it. I think Fianna Fail - Micheal Martin and Sean Dorgan did what they needed to do. Fianna Fail now have a toe in the door in they city - ground covered in the city and county and we need to maximise that for the people who voted for us.”

While he said he didn’t speak to the Fianna Fail leader Micheal Martin, they exchanged “some three or four text messages” on Sunday evening “all related to the election result I might add - and all absolutely positive”.

See the Limerick Leader print editions for more on this developing story. We will have live updates from the first meeting of the new authority tomorrow also.