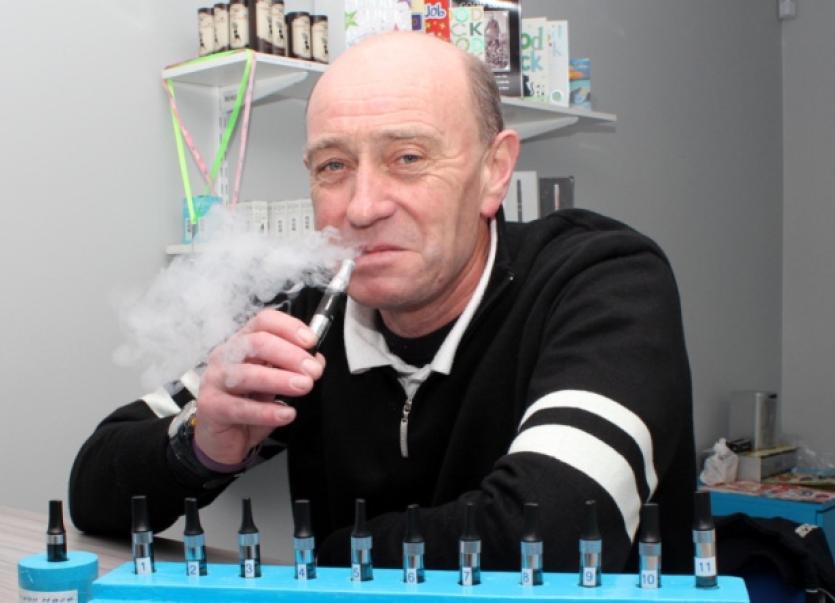 TEN years after the introduction of the smoking ban in Ireland, a lifelong smoker who kicked the habit with the aid of e-cigarettes has opened a shop specialising in the electronic devices.

TEN years after the introduction of the smoking ban in Ireland, a lifelong smoker who kicked the habit with the aid of e-cigarettes has opened a shop specialising in the electronic devices.

Kilmallock native Ger Gould has opened the door to Vapourpal in Charleville which specialises in electronic cigarettes and accessories.

“I gave up the cigarettes on January 30 of last year and I have been a big fan of these things ever since,” explained Ger who has lived in Charleville for over 30 years. “I was hoping, one day, that I might get the opportunity to start my own business.”

A lifelong smoker – he used to smoke a packet of rollies a day - Ger had always wanted to give them up “but failed miserably”.

“I would have smoked the equivalent of 25 cigarettes a day, roughly. I would have also smoked Benson & Hedges. I was off them for 12 months one time but the craving overcame me I’m afraid. The craving is very hard to overcome when you are hooked on nicotine. I never found any of the supplements to be as successful as these things,” he said, referring to his e-cigarette.

His wife Pauline - who used to smoke 40 Benson & Hedges every day – has also made great strides thanks to the e-cigarettes. “She now smokes five a day and she uses the electronic cigarettes as well,” Ger explained.

The Charleville store – which is located opposite Aldi on the Cork side of the town – is part of a nationwide franchise.

Ger, who worked for 33 years in a company, had his heart set on doing something new and then, when a redundancy package became available, he took it and began his new project.

“I was store number 10 of 11,” he said of the Charleville shop. “There are also stores in Ennis and Ballincollig.”

Customers, he said, are coming from far and wide in the hope of kicking their habit. “It’s going very well,” he said. The e-cigarettes stocked in the store come in a variety of flavours. “There would be Eastern Breeze and a few things like that and there are also the traditional tobacco tasting ones, depending on how long you are off the cigarettes. Most people just coming off cigarettes would appreciate the more traditional taste.”

Vapourpal is one of the main distributors of Joyetech products which are recognised around the world as being one of the top manufacturers of electronic cigarettes. “There is a battery,” Ger explained of how the device operates. “There is a clearomiser which holds the liquid, and an atomiser which takes the battery power to the liquid and it vapourises the liquid. You get a rich cloud of vapour and you get your nicotine hit. But you are getting the nicotine without the tar and the chemicals.”

Reports this week say that an estimated 4,000 lives have been saved in Ireland because of the introduction of the smoking ban.