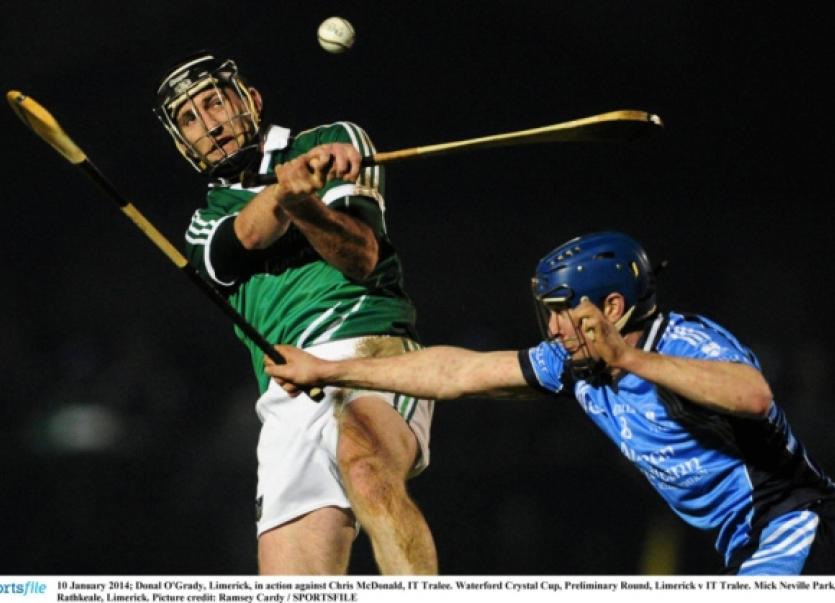 We have entered the early days of 2014 and it seems the winter break from gaelic games gets shorter every year.

Teams are raising the standards and the dedication now required to play at the highest level brings huge demands on players but it appears the price of success leaves them with little option.

Winning All Irelands in both hurling and football, particularly over the past few years, has seen players become almost professional but from talking to many of them they tell me they would not have won were it not for making such sacrifices.

Every intercounty team in the country regardless of their chances are now making the same efforts and yet only a handful will be at the final stages each year. Now and again the odd team will cause an upset but for the best part the super powers in the game will always be in the shake up.

We would love to see Limerick senior football winning a major title but their chances are very slim and for that reason the hopes so often lie with the senior hurlers. It took 19 years to end the barren spell in Munster last year but while they failed badly in the All Ireland semi final they will be seen as title contenders this year.

The journey to winning the All Ireland senior hurling title has now entered 41 years and while most people feel the opportunity was in our own hands last year it’s safe to say it will be as hard as ever to achieve that goal this year.

Clare are the champions and they have taken preparation to an even higher level. They deserve huge credit and while the players drove themselves very hard none were complaining after the replay of the All Ireland final. Winning does not come easy and players have to become very selfish if the desire of winning the All Ireland is to be achieved.

I watched many of the Clare sessions last year and I am sure the players asked themselves many questions during some of them but in fairness to Davy Fitzgerald he set the goal and believed his team was good enough. To win you must find the steel in a player and in Clare’s case they had a bunch that bought into Fitzgerald’s passion and that became a key part in the development of this team.

Little has separated Limerick and Clare over the past couple of years but the rate of progress of Clare over the past year has been staggering. The pace and speed of their hurling wiped out Limerick in Croke Park and while we all hope it was a bad day at the office it did show that some players struggled to cope with what Clare had to offer.

Clare wasted little time in getting back to training and by the second week in December Fitzgerald had his charges back hurling. Tipperary has more than three months done at this stage while Limerick decided to take it easy till the final days of December. They have done a gym programme but it appears they were late coming back judging by others. They are also due to take a holiday and that will further curtail their work. With Cork in the opening round of the National League I am sure the next few weeks will be very intense for them.

Limerick have failed to make the jump from Division 2 and with all due respect to others it will be between Limerick and Cork as to who makes it out of this division. There is no final in Division 2 this year and in that regard the game between these counties in the first round carries huge importance. It will be very interesting to see just how Donal O’Grady and TJ Ryan plan the league and the run into the championship. Very few players have been developed in the panel over the past couple of years, there are some very good young players that need to given their head at this level and it would be nice to think that we will see some of them in the National League. Limerick will have to add strength in various part lines in their team if they are to regain Munster and plot the journey to the All Ireland Final.

The players are there and the time is right for this group to make the next step. Tipperary are working very hard and manager Eammon O’Shea has cut some players adrift and those remaining are in no doubt of what he expects from them. Tipperary lost focus after winning the All Ireland and steering them back on course has not been easy. O’Shea has brought in many young players and over the past three months they have worked very hard.

Limerick will make the trip to Thurles to play Tipperary in a few months time and this venue has not been too kind to the senior hurlers over many years. As far as development is concerned one would expect Limerick to be ahead of Tipperary but only time will tell us the answer to that.

Limerick must build on the success of last year and it would be seen as failure if we don’t move forward and win more silverware.

So often in the past this has been the story of Limerick teams but it’s very important to do so now and provide a base of winning for the players coming through over the next year or so. Tipperary has had a number of trial games in recent times and it has surprised many that no such trials were held in Limerick.

The net has to be cast wide and I know new players will come through. One of the key ingredients to winning is to keep everyone on their toes and one of the best ways of doing this is to open up the panel and give lads a chance. Many lads can become cosy and when that happens the chances of success are pretty slim.

What has become very clear over recent years is that the game does not stand still anymore, managers are bringing in the best people and using whatever means possible to gain advantage. Players have to become single minded in the pursuit of glory and if there is weakness in this regard then they won’t deliver in the heat of battle. It’s safe to say Limerick will not win with the same offering as last year.

The euphoria of winning the Munster title last year has long since evaporated and in some respects losing to Clare in the way that we did took some shine off that victory. The new management have the material and it falls to them to get the best from all concerned.

I would expect the ambition within the players is to taste more of what they had in Munster last year but that can only be done by everyone making that special effort packed with passion, desire and a willingness to do whatever it takes to get over the line. The foundation for any success is set by the management, they set the agenda, they spell out what they expect, they must get the backing of the players but this can only be achieved if the players believe in them and what’s put before them.

The next few months will yield many answers but we all hope that it will be another great year for Limerick hurling and football. I have gone to see the Limerick footballers training and to their credit under John Brudair they are working very hard. I like the way he is trying to develop new young players.

The National League has so often been the base for finding new talent and let’s hope new players of the future for Limerick will emerge during this year’s league.