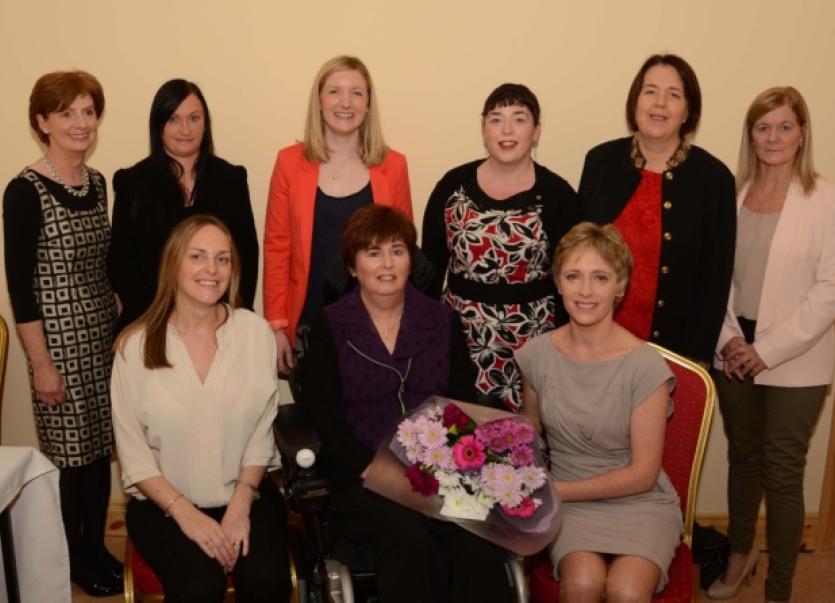 Fittingly it was held in the church hall in Pallasgreen as this was the first school in the parish to be registered with the Department of Education in the 1850s. And when they come to write the history of education in Pallasgreen Cllr Harty will feature prominently.

Sadly her career at the blackboard, or whiteboard these days, has ended prematurely due to her brave battle with motor neurone disease.

But Cllr Harty’s indomitable spirit shines through and she dictated a lengthy speech which was read by her sister Carmel. A large attendance of parents association, board of management, family and friends, present and past staff joined together to honour Mary and wish her well in her retirement. She received many presents and handmade cards by pupils.

Cllr Harty, who served on the board of management as the staff rep for nearly 20 years, said she was delighted to see some of the former board members

She joked that she was “volunteered for the position by former principal - the late Pat Hennessy”.

“That’s how things were done in those days! I’d like to thank Pat’s wife Eva for travelling from Dingle to be with us,” said Cllr Harty, whose wit and turn of phrase remains as strong as ever. Fr Burns, current chair of the board of management, was thanked for the use of the church hall. Cllr Harty said a big thanks to all her colleagues - past and present - and mentioned them all by name.

“I want to acknowledge and thank them all individually for their friendship, co-operation and the odd shoulder to cry on. We worked together, laughed together and always helped each other. Nicker National School, I can honestly say, was a very happy place to work,” said Cllr Harty, who acknowledged colleagues from the INTO, especially Brian Dillon.

“Brian and I served as chairperson and secretary of our local branch for 10 years. It meant Brian did all the work and I only had to turn-up!” said Cllr Harty.

Turning to the parents association, she said they had been a huge boost to the school.

“From the simple tasks to the most complicated they are always eager to help. While many things have changed about the job in 30 years the one thing that hasn’t changed is the children. I can say with certainty they are the most natural, open, lively and willing children I have ever taught. I would like to thank then and their parents for a very rewarding 30 years,” said Cllr Harty. A very special thanks were said to Cllr Harty’s family and friends. Her late father was the reason she got in to politics and her mother for her teaching career. Cllr Harty is proud that the tradition in education continues with her niece Clodagh and cousin Sarah.

“Finally I would like to thank everyone for their prayers, good wishes and beautiful gifts. I will treasure them always,” said Cllr Harty.