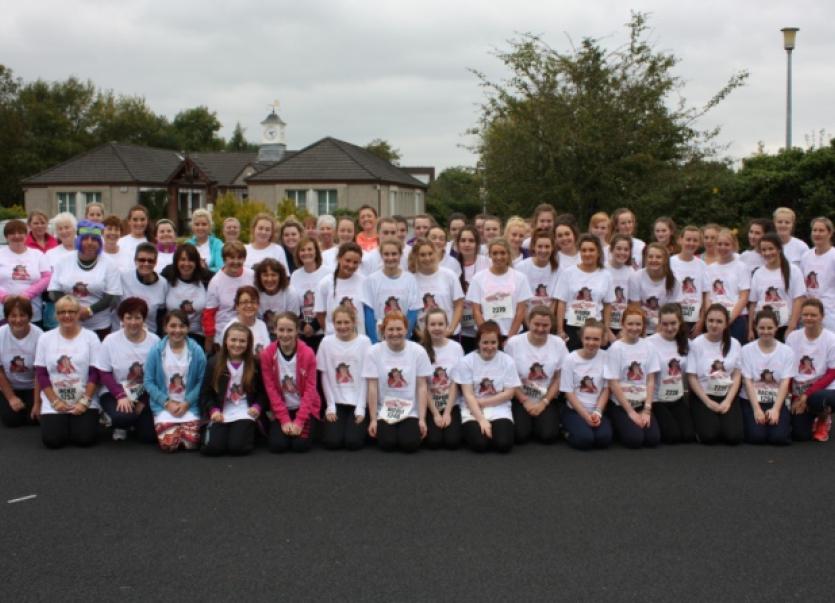 THE generous spirit of an 11-year-old girl who passed away last year is living on in her family and friends who took part in the Limerick Women’s Mini Marathon in aid of children suffering with illness.

THE generous spirit of an 11-year-old girl who passed away last year is living on in her family and friends who took part in the Limerick Women’s Mini Marathon in aid of children suffering with illness.

A total of 72 walkers took part in the event in memory of Becky Macauley of Ashling Heights, Raheen, who passed away in August, 2012 following a brain tumour.

The group, which included students and staff from St Nessan’s national school in Mungret where Becky went to school, and Laurel Hill secondary school where Becky’s sister, Rachel, is a student, wore t-shirts with Becky’s smiling face on the front.

The money raised will be donated to the Paediatric Oncology Patient and Family Support Fund in University Hospital Limerick.

Becky, who was diagnosed will her illness in April 2011, had been a patient of the hospital.

“This fund in the Regional was set up a few years ago by a doctor and the doctors and nurses there at the moment have kept it going,” explained Mike Macauley, Becky’s father.

“If you arrive in there tonight and you are told that your child is sick and you have to go to Dublin for surgery and might have to stay there for a couple of weeks, they will give you a few bob to get you sorted.”

In 2001, Becky herself took part in the Ladies Mini Marathon to help raise funds for the Ronald McDonald house at Our Lady’s Children’s Hospital, Crumlin.

She raised over €3,000 with the help of her parents, Mike and Mary, sister Rachel, extended family and friends.

While she was in hospital in Dublin, Becky kept a diary of her illness and published a book in March 2012 entitled, The Little Girl with the Big Headache.

Through the sale of this book and the marathons, Becky and her family have raised over €14,000 for the Paediatric Oncology Patient and Family Support Fund, to date. Money from their latest endeavour is still coming in. “It is nice to give something back,” Mike continued.

“What I wanted is that somebody would benefit directly from it. It is going directly to the people in need. There is no administration. Myself and Becky stayed in Dublin for two weeks, we were home for two weeks and then it was back up for six weeks. You are trying to run two households,” he explained.

“We want to thank everyone who has given their support,” he added.