Schoolyard rivals square up ahead of Limerick Tipp game 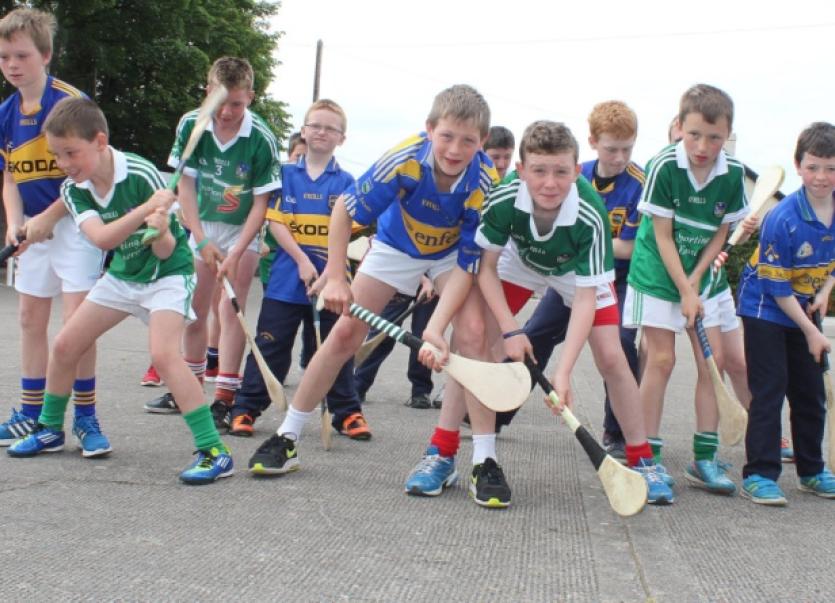 GAA RIVALRIES are at their fiercest and run deepest where two tribes collide and Doon is at the epicentre of it ahead of Sunday’s Limerick and Tipperary clash.

GAA RIVALRIES are at their fiercest and run deepest where two tribes collide and Doon is at the epicentre of it ahead of Sunday’s Limerick and Tipperary clash.

One third of the parish is in County Tipperary and the divide is like a chasm. There is only one topic of conversation in pubs, shops and schools as the Treatymen try and beat the Premier County for the third year in a row.

Interest is fierce throughout the county with the biggest crowd of the 2015 championship set to pack into the Gaelic Grounds.

Close to 20,000 stand tickets were sold-out early this week with the attendance expected to break 30,000. Only terrace tickets will be on public sale outside the Gaelic Grounds on Sunday.

There was almost all-out war when the Leader photographer visited Doon CBS Primary School this week. Br James Dormer, principal, said around 20 per cent of their boys are from Tipperary.

“When you go beyond Carnahalla bridge you are in Tipperary. There is always a good bit of bite in the run-up to a Limerick and Tipp game,” said Br Dormer.

The staff is heavily weighted on the blue and yellow side.

Teachers Joanne O’Connell, Elizabeth Breen and Mary O’Dwyer are all supporting Tipp. SNA Kay Byrnes is the only Limerick representative as Br Dormer is a proud Dub. There was some respite as Limerick intermediate hurler, Denis Moloney, Doon, did some substitute teaching.

But after 22 years in Doon and six in Sexton Street Br Dormer will be cheering for Limerick. The bookies have Tipp as favourites at 8/13; Limerick are 13/8 and the draw is 9/1.

Br Dormer, secretary of the Limerick Primary Schools GAA Board, agrees and thinks Tipp will shade it.

Pupils Chris Thomas and Mark Treacy, played together when the school won the Leader Cup last week but they will be in opposition on Sunday.

Mark, aged 11, from Glengar, will be cheering on Tipperary with whom his brother Thomas won an All-Ireland minor medal. Mark is predicting a Tipp win and he will have the bragging rights in class on Monday morning.

Chris Thomas, aged 12, disagrees. The massive Limerick supporter is going to the game with mum and dad. Rosemary is from Cavan and Chris was born in Swansea - neither a GAA stronghold as Mícheál Ó Muircheartaigh’s famous saying goes. But that hasn’t stopped Chris - captain of his school and East Limerick team that won the Mackey Cup.