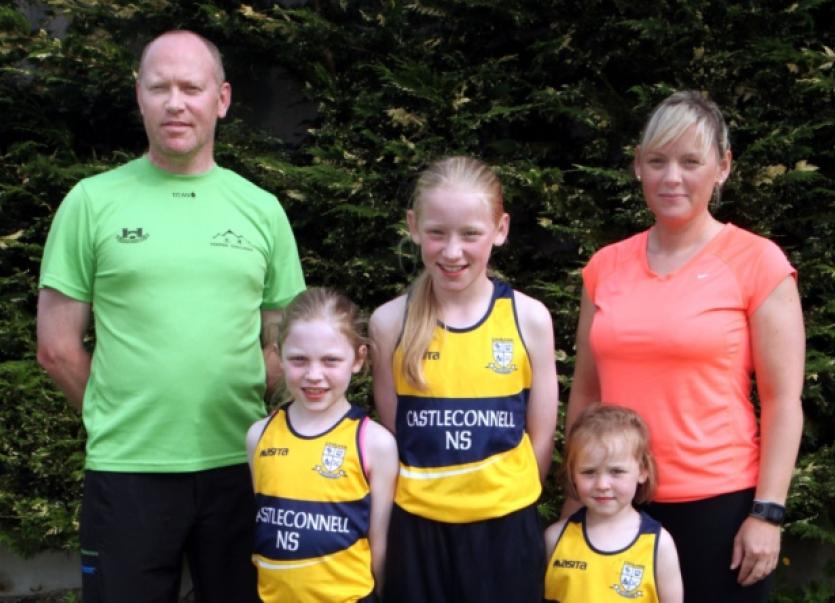 THREE YEARS ago Sean and Anne Madigan raced to London with their daughter, Tara, as a liver transplant awaited.

THREE YEARS ago Sean and Anne Madigan raced to London with their daughter, Tara, as a liver transplant awaited.

Now Tara, aged eight, is looking forward to racing in the Mid-Summer Run in Castleconnell this Sunday, June 21 at 12.30pm. Funds from the charity 5k or 10k race and walk will go towards the development of Castleconnell Community Sports Facility.

It will be a special Father’s Day for Sean as he sees his daughters – Èle, Tara and Èrin – take part in their home race.

Tara will be running in the 10k but it has been a long journey to get there.

Shortly after she was born Sean and Anne were told that Tara had a rare liver disease that affects between 15,000 to 20,000 people. When she was five a check-up showed that she had a complicated blood flow around her liver and she was placed on the transplant list.

When one became available she was flown from Baldonnel to Heathrow and whisked to King’s College Hospital for the operation.

Reflecting on that worrying time, Sean said: “It was bad, it was tough but it could have been worse. If somebody had said to us back then, ‘This is how it is all going to pan out’. We would have said, ‘We can manage that.’”

Since then Tara hasn’t looked back.

“She has pretty much got a full life, there’s no curtailment. They are telling us not to stop anything. It is just off ye go and if anything happens, report back. Don’t be holding back for any particular reason. She’s stable, that’s the most they are looking for in Crumlin and inside in Limerick,

“She’s got an amount of energy now since the transplant. We have to have her out playing and running, keep her busy,” smiled Sean.

On Sunday, Tara will perform in the warm-up by the Nicole Sweeney School of Dance, run her race and then head into the Gaelic Grounds for the Limerick and Tipperary match.

“People can fit in the match as well as the run,” he stressed.

Tara’s own good health is interlinked with the plans for the sports development for the whole community. A training size astroturf pitch, two basketball courts, a walking track, car-park and changing facilities are planned in the project estimated to cost up to half a million euro.

“I just see it as being a great plus for the locality. There are a lot of stories out there about obesity and other health issues. We saw an opportunity in the school that would benefit not just the school but the local clubs and the community in general.

“It will be there in the middle of the village and everybody would have organised access to it. It is a good facility that I think a lot of people will benefit from,” said Sean.

He and Anne know more than most the importance of having an organ donor card.

“Absolutely, and letting people and families know that that is what you want to do. The way legislation is at the moment, even if you are carrying a card, your next of kin are still going to be asked whether they will allow the donation or not.

“A gift of an organ is an unbelievable gift to the family that get it. We have heard back from Tara’s donor family,” said Sean.

She was a 17-year-old girl who died tragically from a brain tumour.

“They wrote back saying it was part of the healing process for them - to see that something really bad happened them but something good has come out of it at the far end for somebody else. That girl alone saved three or four lives.”

“Tara wasn’t dying from the condition at the time, but ultimately it was always the case of when, rather than if. she needed a transplant. Someone else’s misfortune became our fortune and after only seven weeks on the list Tara got a new liver. The Gods were shining on us. We had our troubles but our luck was in.”

All the family are taking part in the Mid-Summer Run and they invite as many as possible to take part.

Log on to midsummerrun.ie to register and find out more.