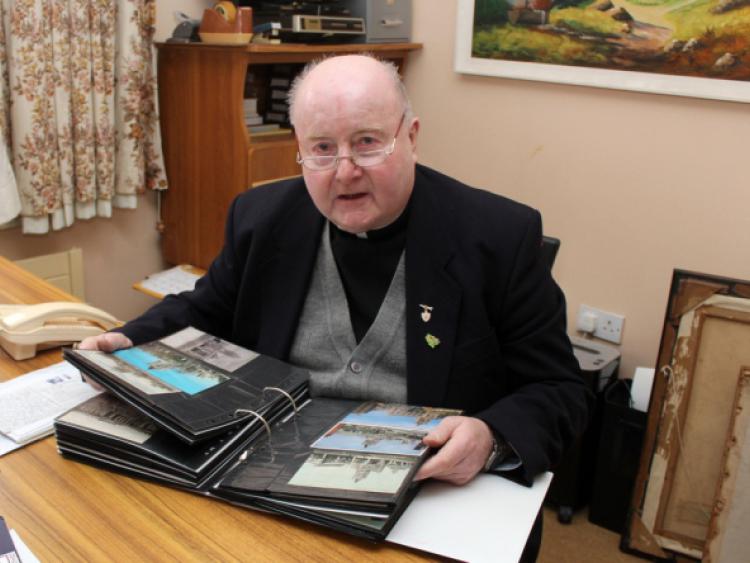 The four-word sentiment that has so often landed in hallways the length and breadth of the country is now struggling to find a home. Once printed on a four inch by six inch piece of cardboard house, it is quickly being replaced by a more snazzy, and modern alternative –the digital inbox.

Postcards are coming under pressure from e-cards – all in the name of progress. But, like any endangered species, the more rare they become, the more treasured they are.

Canon Donough O’Malley, the parish priest in St Mary’s Parish in the city, has in his possession an extensive collection of postcards which he has collected over the last decade or so.

“There must be a few thousand altogether - I have never counted them,” smiled Canon O’Malley as he sifted through his cherished collection this Monday.

Next Monday night, at the request of Thomond Archaeological Society, the Limerick city native will give a talk on Limerick postcards at Mary Immaculate College.

While his vast collection includes postcards from all over Ireland and beyond, the talk will focus specifically on Limerick city. “I have over 500 from Limerick city but I also have postcards from the county – I have them from every county in Ireland and from outside the country. There are very interesting postcards depicting village life in the county in the 19th century. I could give a talk once a week for 12 months,” he smiled of the vast quantity of postcards at his fingertips.

Canon O’Malley has been collecting books since he was at school and in more recent years he began collecting postcards –picking out whatever caught his eye at auctions, car boot sales and postcard fairs.

“Postcard fairs have been big in England, on the continent and in America for many years. There have only been one or two annually in this country for quite some years now,” he explains.

Since the first postcard was mailed on October 1, 1869, in Vienna, they have been used as a means of communication on many different fronts. “Somebody told me that there was over a million cards leaving Ireland in the decade between 1900 and 1910 which is a huge number of cards when you think about it,” said Canon O’Malley.

“Millions of postcards have left this country and every other country. They were most popular, I would think, between 1890 and 1914. Then the tourist element came in.”

The first postcards were quite plain in appearance.

“Some illustrations on one side of the card were permitted by the various governments but governments were slow to give permission for postcards because of the security, particularly on the continent and also in America. But then they realised that it was a wonderful source of revenue - even though the cost of sending a postcard would be half of what it would cost to send a letter.

“That was the days of the penny post. For half a penny, you could send your message to any place in the country or to the continent up until around the time of the first world war.”

They also provide a chronicle of the changes in the world around us down through the decades.

“You can see the difference in the street furniture over the decades, including lamp posts and seating; infrastructure, seaside towns, buildings and modes of transport.

“First there was the donkey and cart, then the horse and trap, followed by the primitive lorry and motor car and then the various types of cars that are available nowadays.”

One of Canon O’Malley’s favourite postcards from his Limerick city collection dates from 1905 and features two ladies dressed in capes selling tickets for a fete in aid of Barrington’s Hospital.

“In those days the people who used to organise those kind of charity events were the genteel ladies of the county - the gentry,” said Canon O’Malley. “I also have old postcards from Castleconnell and the Doonass Falls, the hotel in Castleconnell, early ones of Adare and Adare Manor, along with Kilmallock, Bruff, Rathkeale and Newcastle West.”

While there are still quite a number of postcards being produced, the advent of new technologies has seen a marked decline in the numbers being sent.

“The mobile phone, the telephone and the internet hammered that - but that is progress, it’s a different means of communication,” said Canon O’Malley.

The oldest postcards he has in his possession date from the early 1890s. “You have some very fine collections of postcards available on local topics both in the Glucksman Library at University of Limerick and in the municipal museum in City Hall in Limerick and the county library has a collection as well.”

The talk, Limerick Postcards: A Journey, will begin at 8pm at Mary Immaculate College on Monday.