Gardening: ‘Brighten up your autumn garden’ 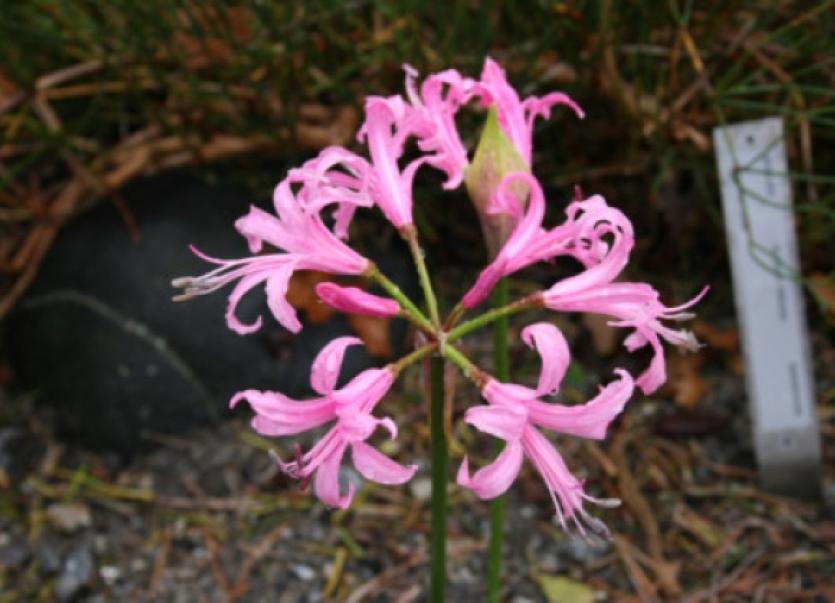 Nerines should be planted at the foot of a south facing wall where they can bake in the sun. We have a clump at the base of a north facing wall doing very well. If you have heavy clay soil grow your nerines in pots or containers using a soil based compost with some grit added to improve drainage. Plant 3 or 4 bulbs in a 7 inch pot, with the shoulders of the bulbs just under the compost and the necks just above the soil. Cover the top of the compost with a layer of grit so that water does not sit next to the bulbs causing them to rot. The bulbs soon settle in and begin to multiply. Do not be too quick to divide and repot the clump as they like to be overcrowded.

Leave the pots in a sunny spot on the patio and when the first frost is forecasted, bring them indoors. After the leaves die down in early summer, keep them dry. When the first signs of emerging flowers appear in the autumn give them a thorough watering. Give your nerines a boost by feeding them with a high potash fertiliser such as tomato food. Do not use too much because the bulbs will produce a huge crop of leaves and very little flowers. Plant nerine bulbs in late October once flowering has finished.

The kaffir lily likes a moist well drained soil. In South Africa they grow in damp water meadows and along river banks. Sow the rhizomes in soil with plenty of well rotted manure added to retain moisture and create the right conditions to allow the rhizomes to spread. If the plant is protected from frost with a mulch it can remain in the same location for several years.

Hyacinth bulbs can be planted now in an open, sunny or partially-shaded position in well-drained soil to provide colour in the garden next spring.

Plant the bulbs about six inches deep and put a small amount of bulb fertiliser in the hole during planting to encourage bigger flowers. They produce dense spikes of highly-fragrant, tubular flowers which makes them very popular spring-flowering bulbs. After flowering, allow the plants to continue growing until the leaves die off, these leaves will provide energy for the bulbs to flower the following year.

To produce stunning scent, over Christmas, hyacinth bulbs can be forced by potting them up in early autumn, keeping them cool and damp for a few weeks to develop a good root system.

When the shoot tips appear, move the bulbs into a temperature of 10ºC and into a warmer position as more shoots appear, giving them as much light as possible.

The Athlacca flower club will be hosting a “Mistletoe and Wine” night with Margaret Walsh a retired AOIFA demonstrator. The event will be held in the Muintir na Tire hall in Athlacca on Sunday November 30 commencing at 1:30pm. Admission will be €10 with proceeds going to the Robert Fox, Benefit Fund.

Mulled wine and Mince Pies will be served and there will also be a well stocked mini Christmas market. For inquires please contact Kaye Kelleher on 087 2657287