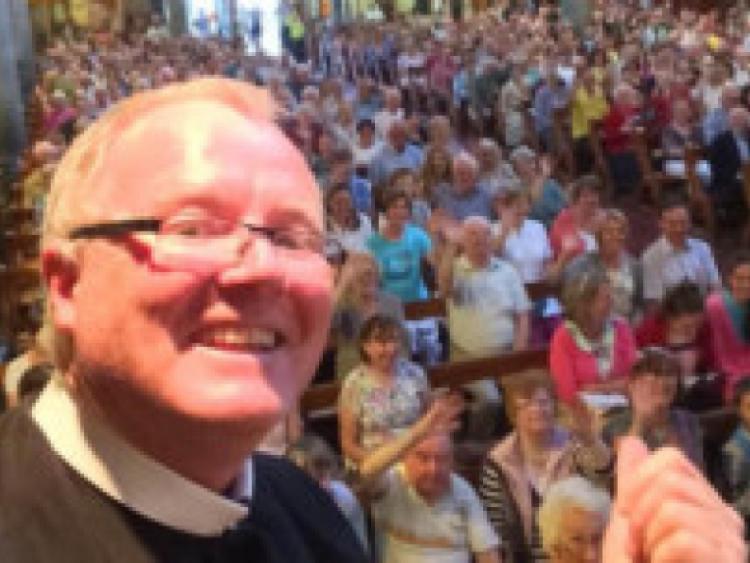 AN historic ‘selfie’ taken at the Solemn Novena in Limerick has ‘mass appeal’ - it’s been viewed by over 200,000 people!

AN historic ‘selfie’ taken at the Solemn Novena in Limerick has ‘mass appeal’ - it’s been viewed by over 200,000 people!

The photograph was captured by Fr Adrian Egan on the second last night of the hugely popular Novena at the Redemptorist church at Mount Saint Alphonsus in the city.

“It was kind of spur of the moment. I got the notion to try a selfie at the Novena. It was during the warm-up period about 10 minutes beforehand and I said ‘let’s try one together for the fun of it and see how it goes’,” explained Fr Egan who is rector of the community at Mount St Alphonsus.

“I had my phone in my pocket. They can actually be quite hard to take but this one came out very well.”

While the Redemptorists are well-known for their use of modern technology - prayers are broadcast on the internet via webcams and Facebook is used as another means of communication - the selfie was a first for the order.

“Pope Francis has said that we need to use all forms of technology to spread the Gospel and if that means using something like selfies, which for a lot of people can be fun - it gets the message out there. We put it up on Facebook and it took off,” Fr Egan explained. “I think 200,000 people have seen it and 9,000 have liked it. Hundreds have commented on it and shared it. People in the congregation told friends and family.”

While he said that many of the comments on the Facebook page are by younger people “we are finding that a lot of older people are using the website so they are a lot more au fait with things than we think they are.

“I met people on the Saturday night who said they saw the selfie and were reminded about the Novena. Some of the comments on Facebook were ‘that’s cool’ and ‘it’s nice to see the church using something like that’.”