When the water recedes 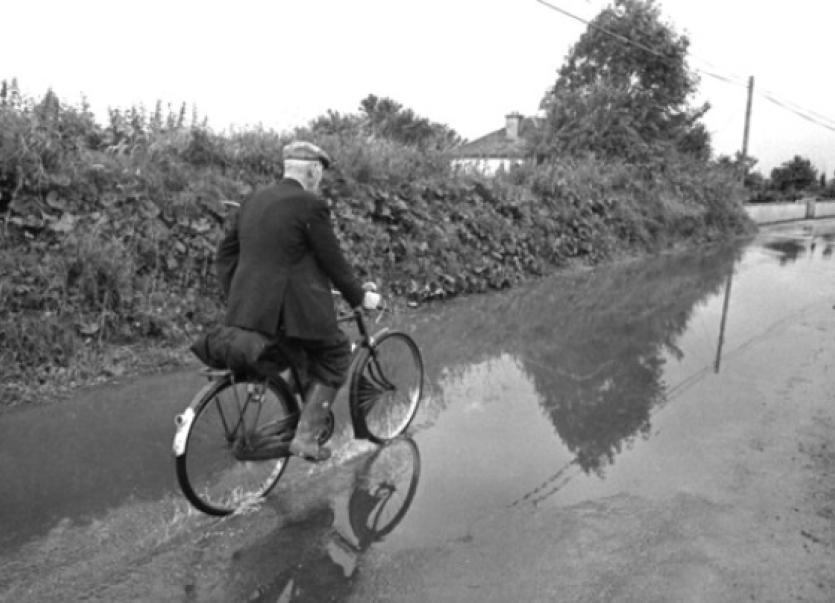 MY heart and my sympathies go out this week to flood victims in Limerick and elsewhere, as they grapple with the enormous challenges of the ongoing deluge.

MY heart and my sympathies go out this week to flood victims in Limerick and elsewhere, as they grapple with the enormous challenges of the ongoing deluge.

Now, before anyone suggests that neither my heart nor my sympathies are of much use to the people facing such misery right now, let me say that I know what it’s like to be a flood victim. A river that flowed behind our house when I was young got blocked with fallen branches one stormy night and then tried to take a less troublesome route to the sea – by flowing in the back door. To this day I can still see my accordion flowing out the front door, which they had opened to relieve the pressure. Everything was ruined and I was particularly disconsolate. But nobody, as far as I can remember, was unduly concerned about the sodden accordion. Instead, I got the distinct impression that they were all thinking along the same lines - ‘it’s an ill wind . . . .’

Back to the current flooding, then! Whatever the EPA may say, I didn’t cause it. That isn’t to say that I’m not now plagued with the most extraordinary feelings of guilt over the disaster and the climate change that everyone says triggered it. ‘Change your ways,’ says the agency, ‘or we’ll all drown.’ Mea culpa! No more plastic bags for me. I’m going to start a compost heap to expiate my sins against the environment. Wait! I have a voucher from the local store for three bags of coal for €12, and if I don’t use it I’ll spend the rest of my life feeling like an idiot, and the flood waters will still be rising on the doorstep.

I think it’s very unfair that the EPA is trying to pin the blame for the unprecedented gales and downpours on people like yours truly, who apparently haven’t changed their lifestyles sufficiently in order to satisfy the weather gods. Certainly, I’m still burning Polish coal, buying plastic bags at the supermarket and driving a car that isn’t environmentally friendly enough to attract the lowest road license fee. But that’s because I can’t afford a car that runs on rape seed oil. I can’t even afford a newer version of my own which comes equipped with friendlier emissions.

Personally, I think the blame should be shifted on to the shoulders of developers and politicians. They built on flood plains and riverbanks and sea shores, and tarmacadamed whole areas of boggy ground without providing proper drainage or without giving a thought to the sensitivities of short-tempered Celtic water gods like Manannán Mac Lir, or even the infinitely more amiable Sionnan, the river goddess of the Shannon.

I have no doubt at all but that the world’s greenhouse gases are causing immense damage and triggering all kinds of climatic upheavals. I mean, why the hell would the Asian Pacific jet stream have departed from its usual course this year and hightailed it up to the Arctic and down again bringing unprecedented blizzards to North America and turning the Niagara Fall to giant icicles. That had nothing to do with my penchant for plastic bags or Polish coal, but we’re so full of our own importance that we think we’re one of the world’s biggest offenders when it comes to committing sins against the environment. Anyone would think we had built hundreds of nuclear power plantgs all over the emerald isle and disguised them as windmills, or that our revered tax exiles were flying in and out of the place too often for the good of the ozone layer. For all we know their private planes could be powered by rape seed oil.

Farmers around me were banned from spreading slurry before the beginning of this month, under an EU environmental directive. Now their slurry pits are overflowing and they can’t spread the obnoxious stuff because as one of them said “the land is already puking”. It’s enough to make me consider building an ark.

Enough of this talk about drastically cutting our greenhouse gases, because at the end of the day I don’t think they’re very drastic at all. Geologists tell us that back in the Cretaceous period (65 million to 140 million years ago) there was a massive rise in greenhouse gases – ten times what we have today. Maybe it was the dinosaurs and their methane gas. I don’t really know, but at the end of the day, it was an asteroid that killed off the dinosaurs.

There is nothing new about climate change in Ireland either. I was born in black ’47 and people still say that the country has never seen anything like it since. Propitious, or what? Others claim that the night of the ‘Big Wind’, which still claims a record in great weather phenomena, would make the recent storms sound like a strong breeze.

As far as I can see, we can’t afford to cut our greenhouse gases at this stage of our development, and anyway, some of the industrial world couldn’t give a toss about theirs. So what’s the point in me switching to paper bags then, and watching them dissolve in the heavy rain, with my groceries all the supermarket yard?

On the other hand, I think there is something I should tell you. We experience an ice age every 11 million years or so, and believe it or not, it’s now 11 millions years since we had the last one. As far as I can see the only thing that will delay it is to increase the gases and let in a bit of sunshine.

If anyone out there is infuriated by my flippancy, please refer to the title of the column before you decide to have me arrested. But really, I do think that I, and other minions like me, should be absolved from any blame that might be attached to the destruction of the planet.