Athletes to shine their light on Limerick for Special Olympics 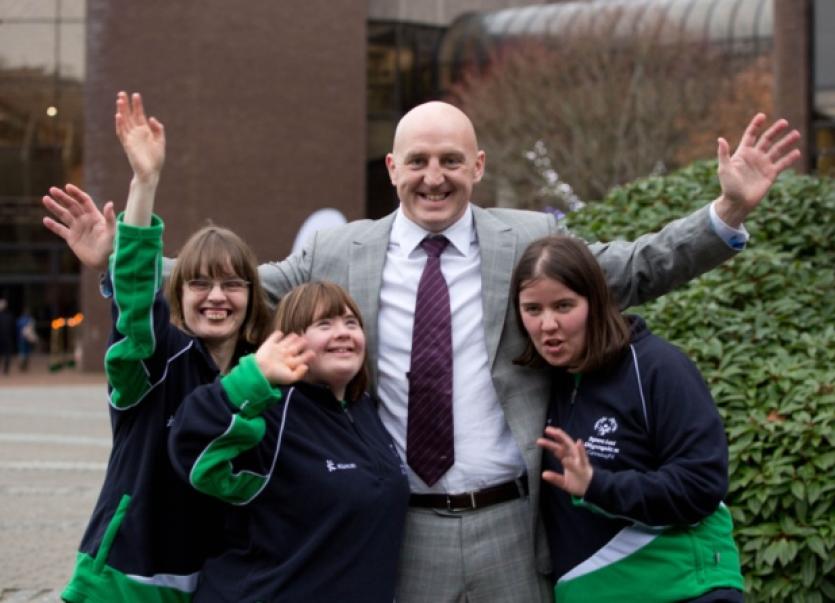 ONE of the largest and most prestigious sporting events to take place in Limerick next year could generate more that €10m for the local economy.

ONE of the largest and most prestigious sporting events to take place in Limerick next year could generate more that €10m for the local economy.

The 2014 Special Olympics Ireland Games will take place in Limerick from June 12 to June 15 following the successful staging of the same event in the city in 2010.

An economic and event impact assessment which was carried out in relation to those Games showed that the total local economic impact amounted to €9.95 million.

“Obviously, in this day and age, that is massive,” said former Ireland and Munster rugby star, David Wallace, who was co-host at the launch of the Games at the University of Limerick on Tuesday.

“It’s like having a big Heineken Cup match here. That cash injection and the profile that goes along with having the Games here in Limerick is fantastic,” he added.

Limerick’s Will Leahy of 2FM who was Master of Ceremonies at the event, said Special Olympics Ireland, which offers year-round sports training to people with an intellectual disability, will be counting on the support of everyone in Limerick to make the 2014 Games a success.

“We’re all here to mark something very special today – the Special Olympics Ireland Games coming back to Limerick in June 2014. They were last here in 2010, and we all remember how the people and businesses of Limerick came together to support the Games then.

“It was an amazing time and had such an impact on Special Olympics Ireland that it wasn’t too hard to twist their arms into coming back. But, like in 2010, they will need each and everyone here to get on board.”

The 1,500 athletes will compete in 13 sports in venues throughout Limerick including the University of Limerick, Mary Immaculate College, Clonshire Equestrian Centre and Murroe Pitch and Putt.

A total of 3,000 volunteers will be required to ensure the successful staging of these Games and a major volunteer recruitment campaign for the Games is now underway.

Ireland rugby captain, Paul O’Connell, who is leading the recruitment drive, but was unable to attend Tuesday’s event due to club rugby commitments with Munster, sent a message of support: “Getting involved as a volunteer at the 2010 Special Olympics Ireland Games will be an unforgettable and rewarding experience. We all need to help Special Olympics Ireland reach its target of recruiting 3,000 volunteers to ensure that these Games are a huge success. Your involvement is vital and is guaranteed to make a real difference,” he said.

“The success of the 2010 Games left a lasting impression on everyone and I am confident that the coming Games will be as enjoyable and positive an experience for everyone involved.

“The two critical areas to guarantee success are people and finance. Over the coming months we will be working hard to raise the €1.9m required to cover the costs of these Games.

Former Ireland and Munster star, Keith Wood, was asked four years ago to get involved in Special Olympics Ireland. He described it as “a life-changing experience”.

“It is magical beyond all belief,” said Keith.

“You get the chance and opportunity to see some of the most amazing people you are ever likely to see, and not just the athletes themselves who are extraordinary but also their families and the fun and the love and the camaraderie and the craic they have in Special Olympics,” he  added.

Christine Delaney who lives in Limerick said she was “delighted and honoured” to have been chosen as the Face of the Games.

“I make loads of friends during the Games. It gives a boost to tourism and generates money for the local economy,”  she said.

For the next seven months these athletes will be busy training in their local clubs, supported by their volunteer coaches.