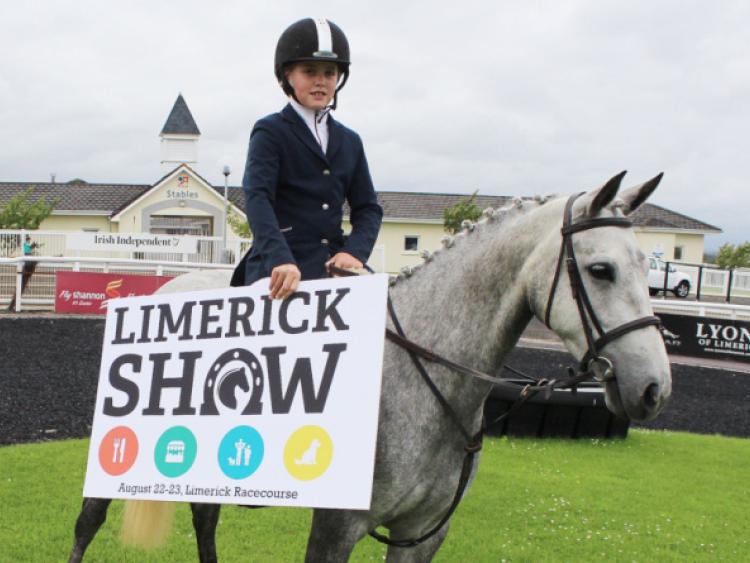 TUESDAY evening’s launch of Limerick Show at the Racecourse attracted the biggest crowd in years but few had to travel a shorter distance than 10-year-old Sarah Fitzgerald, from Patrickswell.

TUESDAY evening’s launch of Limerick Show at the Racecourse attracted the biggest crowd in years but few had to travel a shorter distance than 10-year-old Sarah Fitzgerald, from Patrickswell.

“I live just a few fields away,” said Sarah, who points over the green pastures to her home. Sat atop her beautiful pony Ban Dubh, Sarah is an old hand at riding at Limerick Show despite her tender years.

When she was just three she won the family lead rein class. Sarah tells the Leader she will be competing in the 128 90cm and the bright butterfly 138cm class this year.

The daughter of Des and Annette Fitzgerald is following in dad’s stirrups as he rode in the show when he was her age.

“Myself and Des grew up with the show,” said Annette, and now so too are Sarah, her twin Mark and brothers Brian, Conor and Dessie.

This year’s Limerick Show takes place on Saturday and Sunday, August 22 and 23 in the Racecourse.

New show chairman, Richard Kennedy spoke of the importance of attracting all ages to Limerick Show and encouraged youngsters to take part.

“I am new to the chairman role but not to Limerick Show. I have fond memories of going as a boy and I have family and friends who are immersed in it. It has a great tradition of bringing the city and county together,” said Mr Kennedy. While thousands will turn up on both days, months of work goes into organising every little detail.

Mr Kennedy praised the committee chairpersons and the back up they get from volunteers.

“Without them we couldn’t operate the show,” said Mr Kennedy, who also thanked all the sponsors. Diarmuid Donnellan, AIB and Pat Byrnes, Bank Of Ireland, stressed the intrinsic role that agriculture has played in the recovering economy and the special funds they have to support the development of the agri-sector.

The next speaker, Tom Crosse, of GVM Auctioneers, quipped that if farmers want to spend that money by buying a bit of land he will look after them.

Mayor Liam Galvin said rain, hail or shine, the Limerick Show is always a very enjoyable event that brings people together from all over Limerick, Munster and further afield.

“It is as much a community gathering and enjoyable day out for the family as it is an important fixture on the farming calendar. The show helps to underpin the core values of rural life as well as promote the agriculture sector.

“The weather has been generally poor this summer, which has no doubt had an impact on the livelihoods of farmers, breeders and contractors. Events like this afford the opportunity to take stock of the year to date, and discuss with friends and neighbours the challenges and opportunities presented.

“Farming in this country has always been about community. It has always survived and thrived on the notion that working together delivers the best results,” said Mayor Galvin. The same can be said of Limerick Show. After last year’s wash-out on Sunday all they need is the weather said Leo Walsh, president.

There are many new attractions including a new Kids Zone with free bouncy castles, face painting, disco dome, balloon making and even a “kiddies train”. Also new is a healthy living expo. The RTE cameras will be on site filming their new medical series, You Should Really See a Doctor

Keeping reading the Leader throughout August for more on Limerick Show.