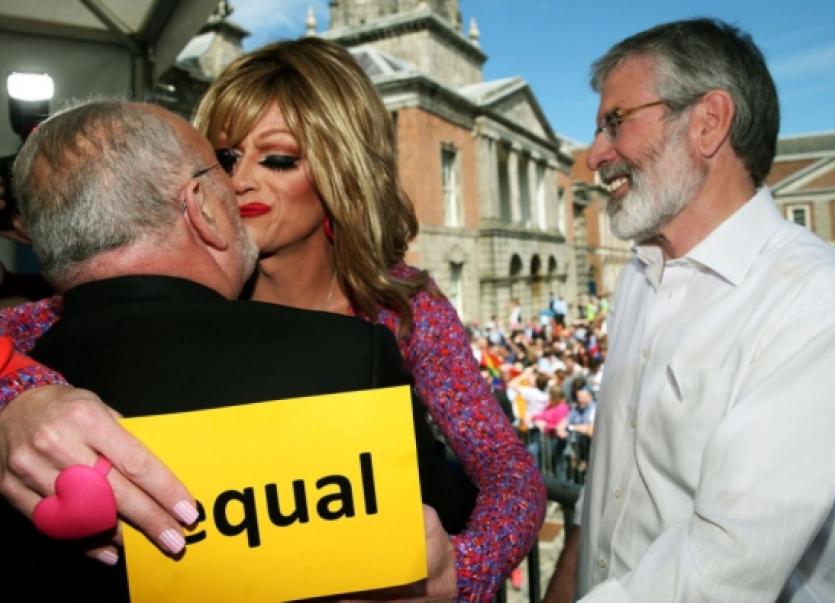 MOTHER Nature has been up to her usual tricks. Last week in this column, I was bemoaning the non-arrival of the hawthorn flower this year. Then, next day, I woke up to find the countryside covered with the stuff - and the column irretrievably gone to press. The hedgerows had burst into flower overnight and I was lucky, apparently, to escape with just egg on my face. I could have found thorns in my bed.

MOTHER Nature has been up to her usual tricks. Last week in this column, I was bemoaning the non-arrival of the hawthorn flower this year. Then, next day, I woke up to find the countryside covered with the stuff - and the column irretrievably gone to press. The hedgerows had burst into flower overnight and I was lucky, apparently, to escape with just egg on my face. I could have found thorns in my bed.

But you never know what to expect when you wake up these days. On Sunday morning, for instance, we all woke up to what was being described as a new dawn of tolerance, equality and inclusiveness in the country. One of my favourite columnists even went so far as to say that we had left ‘tolerance’  behind us.

We didn’t need it anymore, since we were now all equal – apart maybe from die-hard no voters who are by all accounts still harbouring Neanderthal notions about the concept of marriage but who have been more or less driven underground. As the new dawn broke, it became painfully obvious that most of the seriously marginalised in this country were still on the margins.

Now I don’t usually awake at dawn, but the euphoria was palpable and I thought I’d see the sun dancing in the sky, as it did in my childhood when our elderly neighbour, Pat Ryan, rose at dawn every Easter Sunday to witness the phenomenon. What I saw instead was a chicklit tweeter calling someone else, with an opposite referendum view to hers, a hate-filled bigot, and advising the ‘bigot’ to go and pal with their own kind in Roscommon/ South Leitrim. Profuse apologies to the people of the only ‘no’ constituency in the marriage equality referendum followed, but it was a strange start to a new era of tolerance and brotherly love. I gave up waiting for the sun to dance and went back  to sleep.

Nevertheless, bliss it was to be alive, apparently, but to be young must have been very heaven, as Wordsworth put it so memorably. To be old - for some of us anyway - was a bit disconcerting, to say the least. We’re just not able for all this bliss and romance, not to talk of all of these proposals of marriage live on air and on the TV screens. Romantic Ireland may have risen from the grave but Romantic Ireland was never a touchy-feely place. In my own day, nobody even hugged in public, and men and women sat at opposite sides of the church and they still managed to include romance in their lives. Anyway, it can’t be bliss to be single in this new Ireland, without even a tax concession for compensation. Is anyone thinking of them?

Look, I don’t want to be a killjoy, but, regardless of what Enda or Ban Ki-Moon said, I think it’s time now to get over ourselves, show a bit of decorum and modesty and stop rubbing the noses of the losers in their defeat. We should stop deluding ourselves that we are the toast of the world, having just sent out a positive message establishing ourselves as the most enlightened, compassionate, decent and tolerant nation on the face of the earth. The world is a big place and for most people, we’re still little more than a curiosity. The last time we allowed ourselves to wallow for weeks in self congratulations and unrestrained joy, we thought we were going to win the world cup, and it took us decades to recover from the disappointment.

I think that’s why I get very nervous every time we get a swelled head. Anything can happen when we get carried away with ourselves – like my favourite hurling team. Anyway, the sight of Gerry Adams jumping up and down with glee, one arm around the waist of Panti Bliss as the results of the referendum were announced in Dublin Castle didn’t do anything at all to reassure me. I can’t even imagine what it did for the crest fallen ‘no’ supporters, not to talk of the Unionist people of Northern Ireland. Go on! Hah tag to your heart’s content.