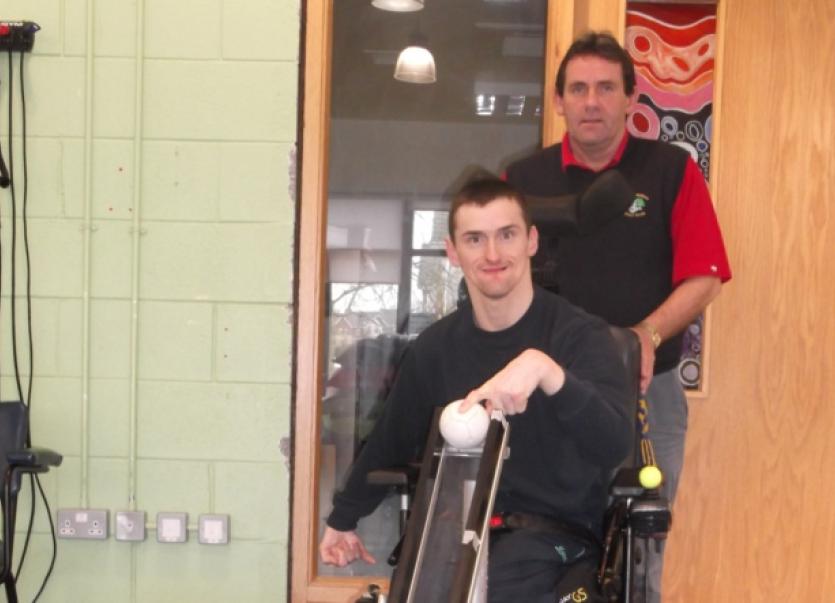 A FUNDRAISING campaign has started to get an Enable Ireland service user on the plane to a European competition in Spain.

A FUNDRAISING campaign has started to get an Enable Ireland service user on the plane to a European competition in Spain.

Twenty-six-year-old Michael O’Dowd, from Thurles, has been with the disability service provider in Mungret for five years. During that time he started playing boccia and he is a natural at it.

Michael, who has quadriplegic cerebral palsy, has been selected for the national boccia team to represent Ireland in the European Continental Cup in Barcelona, from March 30 to April 5.

He was chosen to play for his country due to his excellent displays at the Cerebral Palsy Sport Ireland (CPSI) organised qualifying tournament in Dublin in January.

Mike Cronin, of Enable Ireland, said the European competition will set Michael up on the world boccia scene, gaining an international ranking and being part of a new Irish squad.

The only problem, and it’s a big one, is finance.

“Due to budgetary constraints CPSI is only in a position to fund a small portion of the expenses involved in the national squad. Athletes have to contribute €800 towards travelling expenses to compete in this international event. They also have to contribute another €800 for each of the support staff who travels with the athlete

“In Michael’s case he will need a ramp assistant and extra personal assistant support because of his needs. Hence Michael’s contribution will come to €2,400,” said Mike.

Two more international tournaments are scheduled for this year. Michael has an excellent chance of being selected for the team should he be successful in Barcelona.

In an effort to cover some of these expenses Michael’s sister Andrea is bravely taking part in a parachute jump. The jump will take place in Edenderry on Sunday, March 22. Enable Ireland appeals for sponsorship or donations to help Michael compete.

Michael says it has always been his life’s ambition to represent his county.

“So my selection on the Irish team for the European Championships in Spain is a dream come through. I would like to thank my family and all the people in Enable Ireland especially Terence Murray, a former All-Ireland referee, who is my ramper for the tournament,” said Michael.

Mike says the event is a life long goal of Michael’s and has played a major part in his personal development since he joined Enable Ireland five year ago and his introduction to boccia.

“We are all very proud of Michael’s achievements to date and the hard work of a lot of people connected with getting him to where he is today.

“Michael’s achievement will put Limerick and Enable Ireland on the boccia international sporting map once again,” said Mike, who along with everybody in Enable Ireland and Michael’s family is doing their best to ensure his dream comes through.

For those who may not know, boccia is a sport played by wheelchair athletes with severe cerebral palsy and related neurological disorders. It is an extreme test of muscle control and accuracy. The goal is to throw or bowl a ball so that it lands as close as possible to the jack.

At the Special Olympics in London in 2012 a total of 104 athletes competed in seven medal events. And if Michael gets the opportunity to take part in the European Continental Cup through the generosity of the public he could be representing them on the greatest stage of all in the Special Olympics.