Relief as Dara, 2, gets the all-clear from cancer 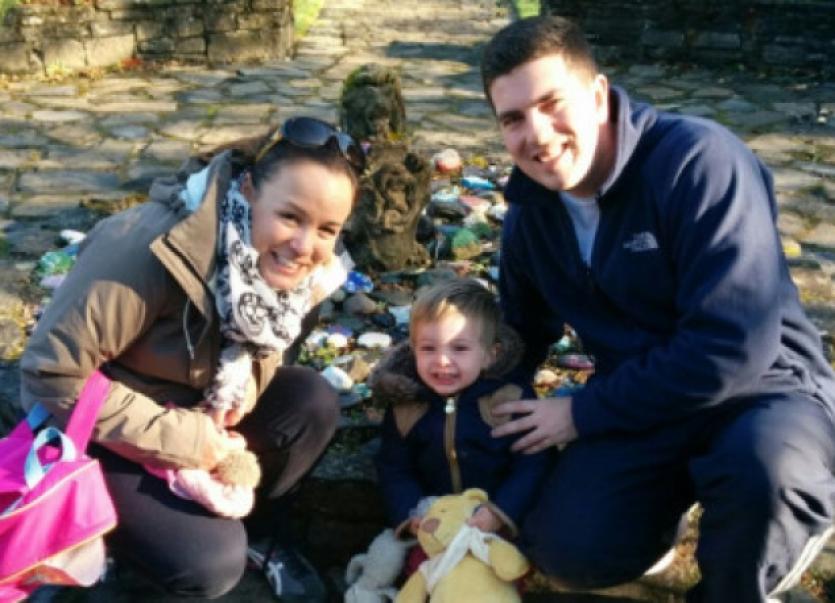 A LITTLE girl who has undergone gruelling treatment for cancer is enjoying a healthy and happy start to the New Year, after getting the all-clear.

A LITTLE girl who has undergone gruelling treatment for cancer is enjoying a healthy and happy start to the New Year, after getting the all-clear.

Dara O’Connell, two-and-a-half, who spent St Stephen’s Day of last year in A&E at University Hospital Limerick was the picture of health this Christmas morning when she awoke to find a Baby Annabell doll under the tree.

Her parents, Lisa Lancaster and Daniel O’Connell, first noticed that something wasn’t quite right with their little girl just after her first birthday. She is their only child.

“It’s a soft tissue tumour that sits in the muscle of the socket of her right eye,” explained Lisa, who is originally from Caherdavin.

“It was like she had a little cold in her eye or she looked a little bit tired. It was August and people were saying maybe she had an allergic reaction or a sting from a wasp.”

Dara underwent a CT scan in Tallaght Hospital. The results indicated that there was something amiss.

“They found a mass, which could have been just a cyst or else something a little bit more sinister and they wouldn’t know until they did a biopsy.”

Dara was sent straight from Tallaght to Temple Street children’s hospital where she remained for four days while various scans and tests including an MRI, an X-ray and a biopsy were carried out.

“Following the biopsy, we were initially told the tumour was benign but two hours later we were told it was malignant.

“Daniel, my partner, had gone to Penneys with his mum to get her pyjamas because we had initially gotten good news but then we were told they needed to bring us back in to talk to us,” Lisa recalled.

“I know this sounds strange but I kind of knew it was cancer from the start. I just had a mother’s instinct as they call it. It was the same as in Tallaght when we were told there was a lump – I just hit the ground. You lose control of your body.”

Dara was then referred to an oncologist in Crumlin where she would begin her treatment for the next eight months in St John’s Ward.

“The tumour grew very aggressively in the space of two and a half weeks. It kept growing and growing and it was only chemo that was going to kill it.”

Dara was sedated for any scans because she was so small. Thankfully, the cancer hadn’t spread and was only local to one eye.

Dara started chemotherapy in mid-September of 2013 aged 14 months. In total, she had nine rounds of chemotherapy.

“She has probably had about 15 general anaesthetics since the whole thing started, two biopsies and countless MRIs and CTs.”

“I started bawling crying,” said Lisa. “We had another scan on September 2 which came back clear again and we have another on January 16.”

Dara – who is obsessed with Peppa Pig – will have to undergo a scan every three to four months for the next five years as there is a very high recurrence rate with orbital embryonal rhabdomyosarcoma.

“Inside in hospital she would always be thrown down for the three days we would be in there but as soon as she came home she really bounced back quickly and would be straight out on the road playing with her pals. Post-chemo she has got the odd sickness but no more than any other child,” said Lisa.

Dara lived in Clonmacken for the first four months of her life and then moved up to Kildare after her dad Daniel who is from Lisnagry got work in Dublin. The family now live in Sallins.

Friends in Limerick organised a fundraiser for the family last February 2014 in the Library Bar in Limerick city and managed to raise €14,000 in one night.

“This money enabled us to survive for the past year – to pay bills, to bring Dara on a dream trip to Peppa Pig World in Hampshire and basically live on one wage for the past year and a half,” said Lisa who paid tribute to the two main organisers of the event Philip Meaney and Niamh Madden.

“We also want to thank Aoibheann’s Pink Tie, a charity for childhood cancer. They delivered a hamper here during the week and it had everything in it – I couldn’t put a price on it,” said Lisa who also paid tribute to all Dara’s grandparents, family and friends for their support over the past 18 months.