Limerick fundraiser for brave ‘wonder child’ who has a rare disorder 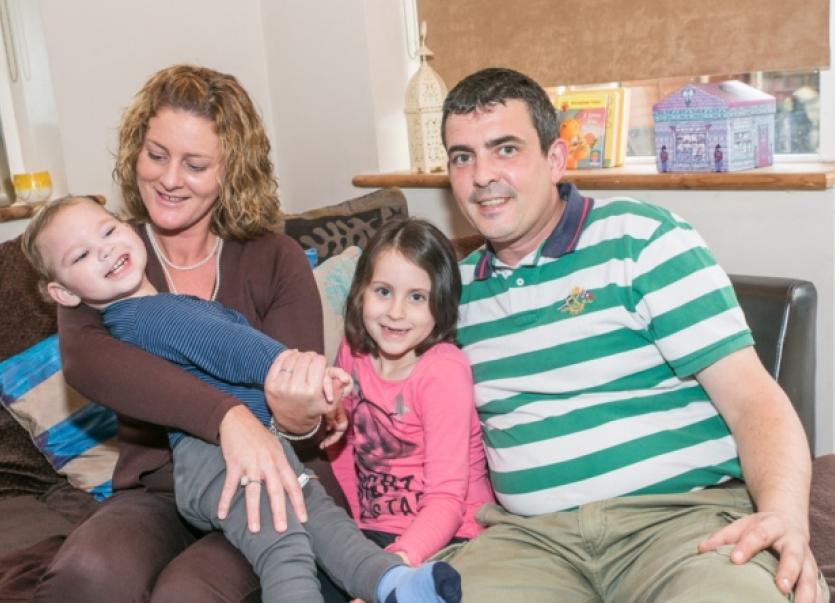 A COUNTY Limerick parish has rallied behind a “wonder child” with a disorder so rare that he is the only one in the country to have it.

A COUNTY Limerick parish has rallied behind a “wonder child” with a disorder so rare that he is the only one in the country to have it.

Michael Butler is the two-year-old son of Ned and Lorraine. The Pallasgreen man married Lorraine and they now live in Kilkenny. When they brought Michael home from hospital they knew after the first week that all was not well.

“We had serious difficulties with feeding and found it very hard to settle the child. Lorraine had numerous visits to our GP and to St Luke’s Hospital in Kilkenny.

“First they thought Michael had allergies to his feeds. We were even told in the hospital ‘Go home with your colicy baby’ at one stage. No one was listening. This went on for months and Michael and ourselves were the only ones suffering,” said Ned. In February of 2013 their GP got a consultation in the Bon Secours Hospital in Cork.

“We met a lovely nurse who examined Michael and told us there and then that the child had a neurological issue of some kind. You can imagine our frustration that the doctors had missed this and a nurse could spot it in minutes,” said Ned. Since then there have been constant journeys to hospitals in Cork, Kilkenny, Dublin and Great Ormond Street in London for tests.

“Michael has a condition known in basic language as a neurotransmitter disorder. This affects everything to do with muscle control in his body from movement of arms, legs, holding up of the head to unconscious muscle control like internal workings of the stomach, bowel and other organs.

“The signals from the brain are not communicating properly with the muscles, so sadly Michael has no real control of his body. We don’t know what road we have in front of us at all. We hope and pray that some day he may have a normal life but the doctors can’t say for sure what way things will be,” said Ned.

His son is the only child in Ireland that they know of with this disorder and the doctor in London, who specialises in it, currently has 16 patients in all of the UK.

Everybody who meets Michael falls in love with him and his beautiful smile.

“He is such an amazing little man, he really does try to get on with things as best he can. He loves his cartoons on the telly, he loves watching other kids at play especially his big sister Abby, 6.

“The way he smiles and screeches with happiness and laughter at times is just wonderful and he will bring a smile to your face on occasions each day. He interacts with his eyes and the way he looks at you is amazing,” said Ned. Michael loves singing and music.

“I first noticed this as I used to sing to him to settle him if he was uncomfortable. I always liked Mary Black’s music and I used to sing Wonder Child into his eyes and the way he responded to the song was amazing. From here on in everyone came to call Michael our wonder child and he sure is. As the words of the song go ‘He’s your wonder child and my dreams come true’ and with the help of God some day our dreams will come true. This is a very special song in our house and will still settle him to this day if he is in distress,” said Ned. Mary kindly sent a signed copy of her latest CD.

And the kindness doesn’t stop there. The family get great support from Enable Ireland, Jack and Jill Foundation, Laura Lynn, Cliona’s Foundation and the Bumbleance.

“Our families have been a great support to us all since day one. My father in particular is a mighty man, Michael Butler senior travels to all the hospitals when we are going around the country. He comes down to Kilkenny weekly to see his grandson and help take care of him,” said Ned.

Out of the blue the family were approached by Grainne O’Sullivan, Pallasgreen, asking could she arrange a fundraiser to help with Michael’s ongoing care and travelling expenses. A dance will take place in the Millennium Centre, Caherconlish on Sunday, January 18 from 3pm to 6pm so it is especially family friendly. Dermot Lyons is playing and the raffle has excellent prizes including a signed Limerick jersey. Contact 087-9742456 to book tickets costing €10.

“What the people of Pallasgreen are doing for us is such an amazing and unexpected piece of support, in particular Grannie O’Sullivan, who is the mastermind; Ger O’Connell and all the others who are involved. Pallasgreen is an amazing parish with great community spirit. I thank each and every one of them for wanting to help and support our little man Michael all the way down in Kilkenny,” said Ned.